The Economy Expands In The Third Quarter – But Figures Point To a Recession Beginning in the Fourth Quarter or Early in 2023.

The US economy grew at an annual rate of 2.6% in the third quarter after contracting in the first half of the year, notwithstanding inflation and higher interest rates. That is good news, but the good news is tenuous. Exports and government spending contributed the most, which are not precursors to a sustained expansion. It is unlikely that net exports will continue to grow. Consumer spending slowed, and most analysts expect the housing market will remain anemic.

Economists use the final sales of private domestic purchases to gauge an economy’s underlying demand because it excludes trade and government spending. It fell every quarter since the fourth quarter of 2021, when it grew at 2.6%. Last quarter it rose at a 0.1% annual rate.

Inflation fell in the third quarter but remains significantly above the Federal Reserve’s target of 2% annually. Policymakers are expected to increase their benchmark rate Wednesday. Their objective is to lower inflation by reducing the economy’s aggregate demand without initiating a recession. This blog provides a detailed analysis of each category included in RGDP and why the economy is likely to enter a recession in the fourth quarter.

The Bureau of Economic Analysis’s news release and report can be accessed at Gross Domestic Product, Third Quarter 2022 (Advance Estimate). Here are the report’s highlights.

Gross domestic product is the sum of personal consumption expenditures (consumer spending), private domestic business investment, government consumption and investments, and net exports. The table below summarizes the change in each category and its contribution to the quarterly change in RGDP. 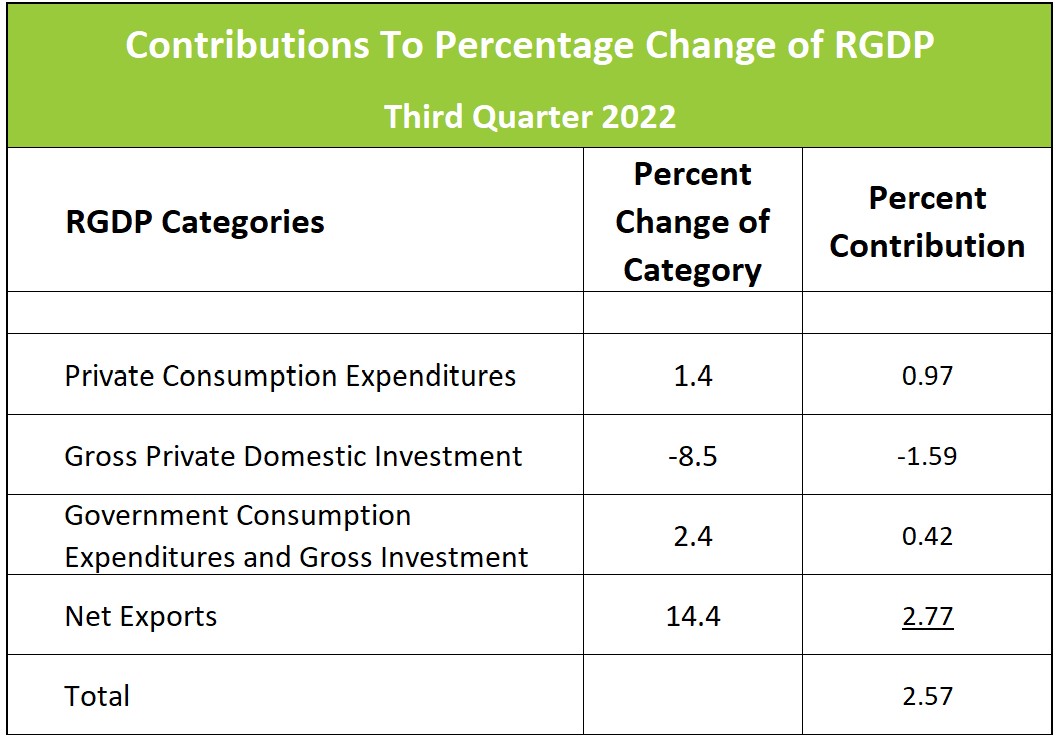 Personal Consumption Expenditures: Wage increases, accumulated savings, and credit card debt financed a modest increase in consumer spending during the third quarter and contributed nearly 1.0% to the economy’s 2.6% growth. However, increases in consumer spending continued to trend lower in 2022. Inflation has diminished most families’ purchasing power because price increases exceeded disposable income. But real disposable income grew for the first time since the first quarter of 2021 thanks to a modest slowdown in inflation and a tight labor market. However, inflation continues to threaten future economic growth. The prices of necessities such as rent, food, and gasoline have significantly increased, sapping funds for other goods and services.

Spending on goods slipped for three consecutive quarters, while service sales increased, indicating that families are returning to prepandemic spending patterns. Higher interest rates accounted for some of the slowdown in consumer spending, especially for interest-sensitive items such as cars and goods associated with new homes.

Gross Private Domestic Investment: The housing market suffered a terrible quarter, falling at an annual rate of 26%. Many families have postponed purchasing a home. The recent appreciation of residential properties and higher mortgage rates have made home ownership less affordable. In addition, many families are delaying buying larger homes. Falling home sales impact the sale of many other items, including furniture and appliances. It is doubtful that the housing market will recover soon if mortgage rates continue to increase.

Equipment sales recovered some in the third quarter after falling significantly in the first half of the year. However, investment in structures has fallen every quarter since the first quarter of 2021. Higher interest rates and falling stock prices have increased the cost of acquiring capital. In addition, many managers are reticent about expanding if they believe a recession is imminent.

Government: Government consumption expenditures and gross investment increased by 2.4% and contributed 0.4% to the third quarter’s increase in RGDP. It was the first increase since the first quarter of 2021. The bulk of the increase was in defense spending.

Net Exports: Net exports rose 14.4% in the third quarter and contributed 2.8% to the quarter’s increase in RGDP. Much of the increase in exports was oil and natural gas because of the disruption caused by the war. Travel was a large portion of exports. Travel probably benefited from a surge in demand coming out of the pandemic.

Most economists doubt net exports will continue to grow. The Russia – Ukraine war is harming the European economies. Higher energy costs have increased inflation. Central banks have responded by increasing interest rates, much like the Federal Reserve. The International Monetary Fund forecasts slower growth in 2022 and 2023.

The weaker economies and a stronger dollar will make American goods more expensive and stifle the demand for US goods and services.

The key to the future relies on the consumer. Will they continue to spend? The answer depends mainly on how they feel. Michigan’s Consumer Sentiment Index “remained low by historic standards as consumers continued to voice concerns about inflation.” Consumers are more likely to spend less when they are concerned about the future.

Inflation is slowing the economy – primarily because income growth has not kept pace with inflation during most of the year. Some of the most significant price increases have been for necessities such as food, shelter, and gasoline. Rising prices and less real disposable income have forced families to make difficult decisions on which goods or services to cut. Spending cuts could continue to mount as families deplete their savings.

The Federal Reserve policymakers are correct in focusing on inflation. Inflation becomes harder to control as it becomes more entrenched in the economy. However, many economists believe the Fed is cutting too much too quickly. It takes six months to a year for interest rate hikes to trickle throughout the economy. These economists contend the cuts have been too large and too frequent and suggest more time is needed to ascertain the impact of recent rate cuts. They fear the eventual impact of the current monetary policy will propel the economy into a severe recession.