Unemployment vs. Not Employed

President Trump mentioned in his first State of the Union address speech that 94 million Americans are "out of the labor force" and has implied that these people are unemployed. The department of labor reported last month that the number of unemployed in the United States equals 5 million people. Who is right? Both are. Let's take a closer look.


It is true that 94 million are not employed? Is that the same as unemployed?

Whenever a person is employed, an employee and employer must reach an agreement on compensation. Many people who are not employed choose not to work because a company is unwilling to pay them enough to return to the work force. Many of the 94 million Trump mentioned choose not to work, but almost all would return to the work-force if offered an outrageous wage. For example, the parent who chooses to stay at home to raise children may change his mind if he were offered a job for $1,000,000. A retired person may be enticed to return to work at a salary of $300,000 – but she is unable to find work at that salary. A wealthy volunteer who is passionate about a cause may turn down $100,000 but not $350,000 to work for the cause she is so passionate about. A recent high school graduate may choose to attend college rather than work for a minimum wage. A highly skilled woman may be offered many jobs at $60,000, but she does not accept them because she believes she can find a job paying $80,000. These people are not employed, but should they be included in the unemployed? They are in Trump's 94 million. This means 37.1% are out of the labor force. The Bureau of Labor Statistics reported a participation rate of 62.9% in January. Anyone who is not participating in the labor force is "not employed". The BLS also reported an unemployment rate of 4.7% in January. The rate balloons to 9.2% when part-time workers who would prefer to be working full-time are included. 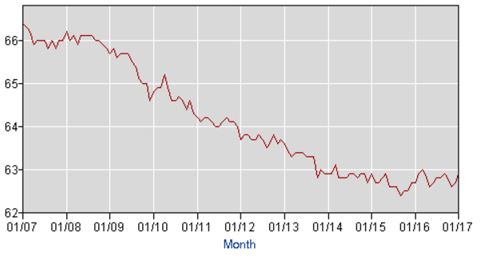 
Who are the unemployed?

The "unemployed" only include people who have looked for work in the prior four weeks but are unable to find a job. This includes people between jobs, such as a person who quits his job to move to another area of the country because his wife just received a promotion and had to move. It includes the worker who chooses to change her career and leaves her job to find a new one. The retiree, stay-at-home parent, volunteer, part-time worker, and student are excluded from the list of unemployed.

Chances are virtually every citizen could find a job doing something, somewhere. An acquaintance recently told me he would accept a job anywhere - but then when I mentioned I could help him find a job paying minimum wage in construction, he backed down. He thought he could find a better job that pays better – besides he had several months remaining on his unemployment insurance. A person may be unwilling to move to another area to secure an unattractive job.

We weigh our opportunity costs. My unemployed acquaintance chose not to accept my help because of the unemployment insurance he received. The stay-at-home parent believes the compensation he would receive is not worth the benefits of remaining at home. The student chooses to attend college as an investment because she can. Our standard of living provides us with more options and choices.

How can President Trump increase the number of employed?

Economic growth that develops new jobs is one answer. However, most economists believe the current employment rate of 4.8 percent is near the full employment rate. In other words, about 4.8 percent of the work force is between jobs. (Bureau of Labor Statistics: Employment Situation) Perhaps they have just graduated, or they moved, or they have chosen to change careers. Economic growth needs to entice people to return to work to increase the number of employed. The increase in the demand for workers will raise wages. It is doubtful that an increase in wages will be sufficient to entice the retired, stay-at-home parents, and other individuals who choose to be unemployed back to work. (If so, we probably will have an inflation problem.)

The minimum wage could be lowered or eliminated. In a 2014 report, the Congressional Budget Office estimated that up to 500,000 jobs would be lost if the proposed $10.10 minimum wage were passed. At lower wages the quantity demanded of low skilled workers would increase. See our lesson Supply and Demand – The Costs and Benefits of Price Controls for a supply and demand analysis of the minimum wage.

Social programs can be cut to entice people to return to work or accept a job they would not have otherwise. Many workers would delay retirement if Congress required people to wait until 70 to draw Social Security. The unemployed may look a little harder or accept a job they do not want if they are denied unemployment insurance.

Increasing labor participation would include reducing the unemployment rate – but it would also include providing incentives for people to work longer, accept jobs they may not want, work instead of remaining at home, or even choosing not to attend university.

I believe we are blessed to live in a country wealthy enough to provide options - where people can retire early or remain at home to tend to their children. I support policies that promote job growth and a decrease in the unemployment rate. I also support the idea of increasing the labor participation rate – but there is a difference that requires different policies, and it is much more difficult to dramatically increase labor participation than it is to decrease unemployment.