For example, Marcia is a computer programmer earning $70,000 per year. She has always wanted to run her own business and is considering opening an ice cream parlor. Marcia expects sales of $250,000 a year, and projects explicit costs of $197,000. Her explicit expenses include rent, labor, raw materials, insurance and utilities, so Marcia's accounting profit would be $53,000. Should Marcia start her business? Her business would be profitable. Economists would say, "No" because Marcia should consider what she would give up. These are her implicit or opportunity costs. One cost is her $70,000 salary. (Marcia would work full time and need to quit her current job.) Assume that Marcia must invest $100,000 to start her business. She would give up the opportunity to invest $100,000 in another investment such as a CD (Certificate of Deposit). Assume the CD earns $2,000 in interest annually. Another implicit cost is $2,000, the interest income she would give up if she opens her ice cream parlor. Marcia's economic profit is projected to equal a loss of $19,000, which is her accounting profit less the implicit expenses of $72,000. Clearly Marcia would be better off financially if she did not open Marcia's Ice Cream Parlor. The difference between her accounting profit and economic profit is summarized on the two profit and loss statements below. 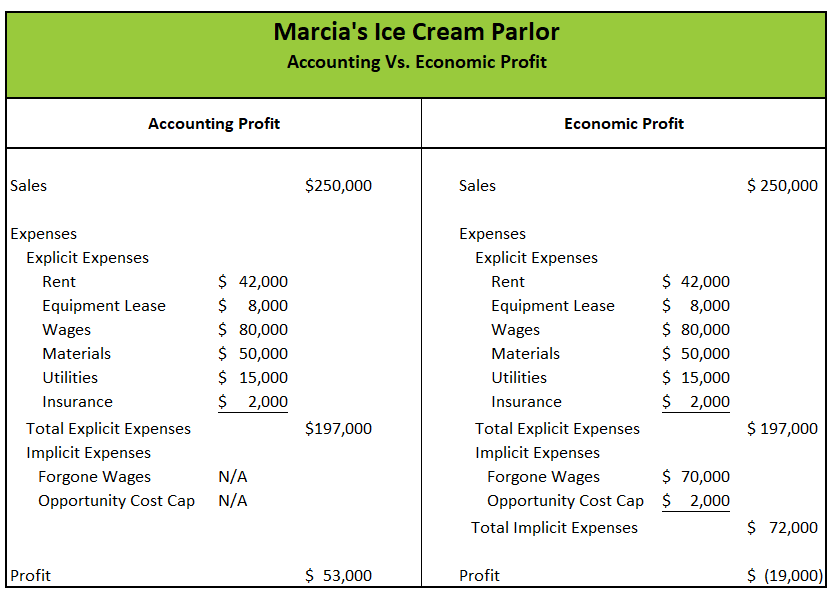 The only difference between an economic and accounting profit is in the inclusion of implicit costs, so the accounting profit will always be greater than the economic profit. The economic loss does not mean Marcia is losing money, but it does mean she would be better off using her time and resources as a computer programmer. An interesting note is that if Marcia borrowed money to finance her business, the interest paid on the debt would be considered an explicit cost and would be included in both the accountant and economist’s profit and loss because interest is actually paid by the company.

Now assume that George is interested in opening an ice-cream parlor. George recently retired and would like to return to work. George and Marcia's accounting profits would be equal, but George's economic profit would be $51,000 assuming his only implicit cost is the interest income he would forgo when $100,000 is invested in his new business. This illustrates how two individuals owning the same business would have equal accounting profits, but different economic profits because of their different circumstances.