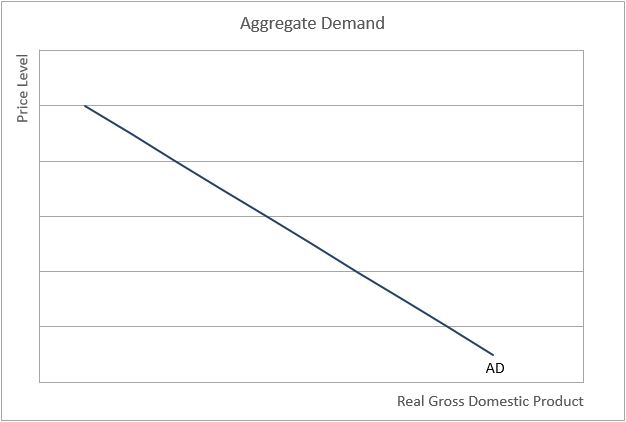 The economy’s price level, the weighted average price of the goods and services produced in an economy, appears on the vertical axis. It is measured by an index such as the personal consumption expenditures price index or consumer price index. RGDP, the economy’s total production when adjusted for inflation, is on the horizontal axis.

The table below summarizes the differences between the demand curve for a good or service and the economy’s aggregate demand.

Movement Along The Aggregate Demand Curve

Most economists use the term wealth effect to describe how a change in the purchasing power of a consumer’s assets influences consumer spending when the economy’s price level changes. For example, if you have $10,000 in savings, and prices double, the money in savings would only purchase half of what it could before the price increase. The wealth effect affects consumer spending because a price level change influences the consumer’s purchasing power. An increase in the price level diminishes the consumer’s purchasing power and causes a decrease in the aggregate quantity demanded. Movement occurs along the aggregate demand curve to the higher price level.

The interest effect is the effect that a change in interest rates has on investments and RGDP following a price level change.

A drop in the price level can influence interest rates, which in turn impacts investment. If the price level drops, it is similar to an increase in income because consumers can purchase the same basket of goods they purchased before the drop with less money. The savings or additional income is either invested in a savings account or used to purchase additional goods or services. The added savings increase the banking industry’s supply of loanable funds. Banks compete for loans by lowering their lending rates. In summary, the increase in the money supply to lend reduces the interest rate. The lower rate prompts some businesses to increase their investments to grow their businesses.

Net exports equals exports minus imports. A change in the price levels of two countries influences their trade, which impacts net exports. The extent depends on the relative change in both countries. An increase in the price level reduces a country’s aggregate quantity demanded. Suppose the price level in the United States increases more than in Japan. The US dollar would become more valuable relative to the Japanese yen. US-manufactured goods would become relatively more expensive than Japanese goods, resulting in a change in exports and imports.

US exports would decrease. Some Japanese buyers would seek substitute goods manufactured in Japan (or another country) rather than import them from the US.

The demand for imports would increase. As the price level increases, imports become more attractive because foreign-made goods become relatively less expensive. US consumers would purchase more Japanese products if the US price level increased relative to Japan. 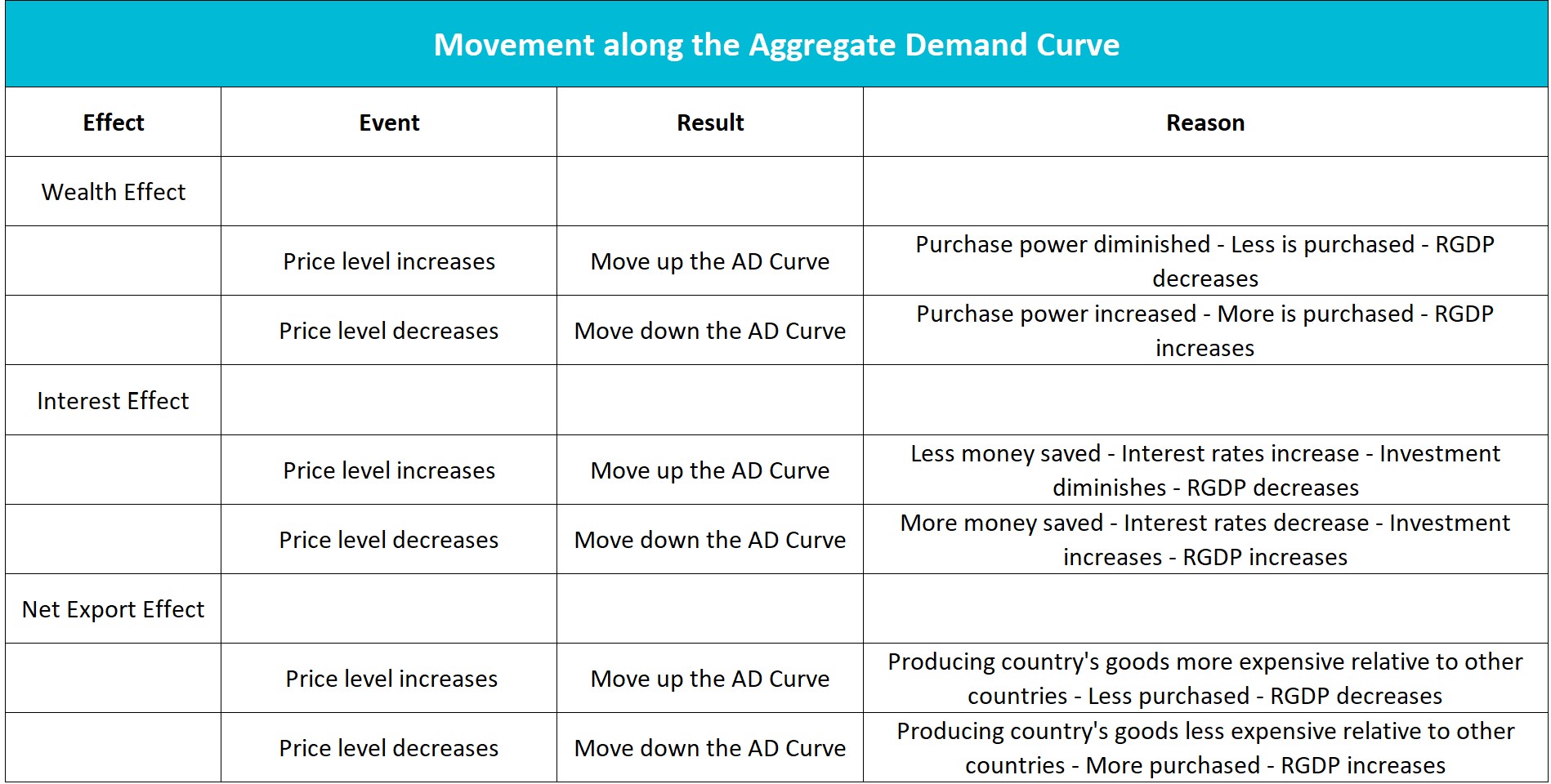 A Shift in the Aggregate Demand Curve

Optimistic consumers spend more. When optimism increases, C increases in our RGDP equation, and the aggregate demand curve shifts to the right. Consumers demand more goods and services at every price level. Conversely, when consumers are concerned about holding their jobs, they may hoard their cash and spend less. During these periods, consumer spending will decline at every price level, and the aggregate demand curve will shift to the left.

Technological change may increase the demand for capital as companies modernize to cut costs and increase profits. The introduction of personal computers in the 1980s helped propel investment spending to record levels following the Economic Recovery Tax Act of 1981.

A Change in Net Exports:

The exchange rate between two countries influences trade between those countries. For example, a Tesla selling for $50,000 would cost €44,100 in Germany on the morning of February 23, 2022. If the exchange rate moves to where $1.00 is worth €0.9 (or €1 purchases $1.111), the same vehicle would cost €45,000. In this case, the dollar has appreciated or strengthened relative to the euro because one dollar purchases more euros.

Who benefits, and who is harmed by the appreciating dollar? The German buyer is hurt because imports from the United States cost more. Tesla’s exports to Germany would fall. However, American consumers would benefit because German cars would be less expensive in the United States.