Capacity is the maximum number of units a business can produce without increasing its fixed assets.

A liter container has the capacity to hold one liter. Manufacturing facilities also have capacities, which are the maximum number of units that can be produced over a period of time without investing in additional fixed assets such as plant or equipment. If a manufacturing plant is operating at capacity it is unable to quickly respond to an increase in demand by producing any more of a good or service. Only by investing in new equipment, or even a new factory can the company increase its capacity. The company has a price inelastic supply curve at this point because it is difficult for it to respond quickly to an increase in the price of the good it is producing. A large increase in price may be needed to entice the company to invest in the fixed assets needed to increase its capacity, but that takes time. Companies may respond by raising its price to reduce the quantity demanded to a level that meets the capacity of its manufacturing plants. It is very difficult for companies to operate at capacity for extended periods. Deferred maintenance may result in breakdowns and work stoppages. This is one reason why the marginal costs increase when approaching capacity. An economy is growing when most companies are operating near capacity. Inflation is a likely result.

The supply graph below illustrates this. Companies operating at less than full capacity have excess capacity. These companies are operating on the elastic section of their supply curve. Note that a small increase in price will result in a relatively larger increase in the quantity supplied. When the plant is near capacity, the supply curve becomes more inelastic because companies are not as responsive to price changes.

Economies are at their capacity when operating on the boundary of what economists call the "production possibilities frontier". A production possibilities frontier is a graphical representation of combinations of amounts of two goods or services that an economy can produce by transferring resources from one good or service to another. All the factors of production are being used efficiently on the boundary. When an economy is operating inside the frontier it is not at capacity, and the production of one unit can be increased without diminishing the production of another good or service. The graph below illustrates several possibilities. Assume a country produces two products, cell phones, and vats of soap. At points B,C,D, or anywhere on the boundary of the curve, resources are used efficiently and the country is operating at capacity. Point F is unattainable because it is outside the frontier and beyond the country's capacity. Point G is inside the frontier, so the country is operating at less than capacity. The country could increase the production of vats of soap without sacrificing the output of cell phones and move to Point B. More cell phones could be produced without decreasing the number of vats if the economy moves from G to D. 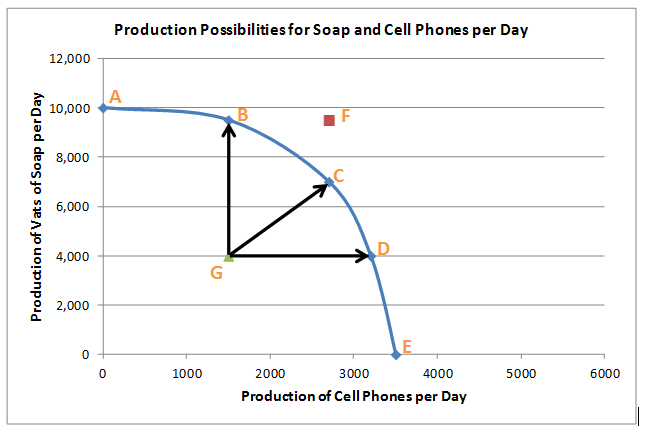