A cartel is an organization that colludes to set prices, production levels, or exert market control with the objective of increasing profits.

A cartel’s primary objective is to increase the profits of its members by some combination of limiting output, price fixing, and market allocation (customers or geographic). By working together, cartels can achieve monopoly power. Private cartels are illegal in most countries because they obstruct competition.

Assume an industry is an oligopoly and it has a few dominant companies. These companies are interdependent, meaning they consider how their competitors will react before making a strategic move. They compete vehemently. To reduce competition, they choose to form a cartel. How the cartel achieves its objective and society’s cost are shown on the graph below. 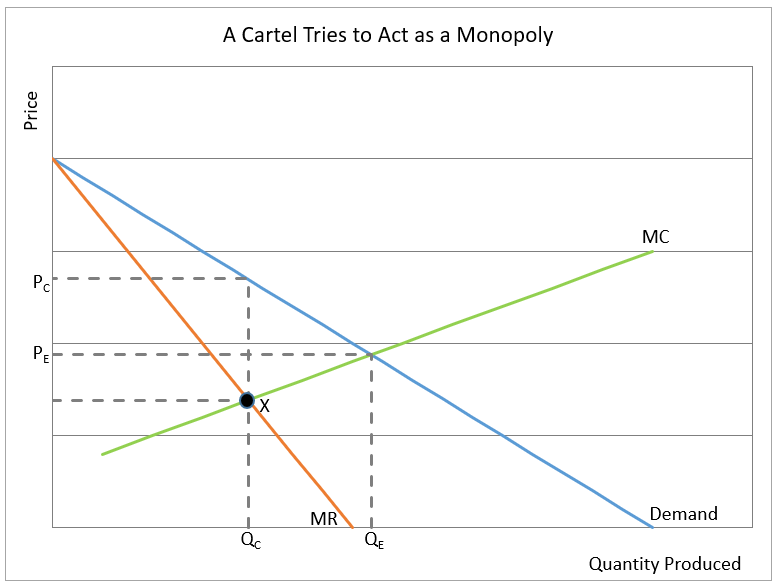 The industry produced QE and the market price was PE before the cartel was established. Shortly afterwards, the members agreed to maximize the industry’s profits by acting as one company (a monopoly). The graph includes the industry demand, marginal revenue, and marginal cost curves. A monopoly would produce QC and charge PC. Society loses because a higher price is paid and less is produced. (Review the monopoly discussion in Market Structures Part I – Perfect Competition and Monopoly for an explanation of why monopolies produce QC and charge PC.) But how will the reduction in output to QC be allocated among the cartel members? An agreement will need to be negotiated. By working together, a cartel can maximize its joint profit, but the cartel fails to maximize the profits of the member companies because the individual companies are not producing where their marginal revenue and marginal cost curves intersect. In other words, each company could earn a higher profit if it violated the terms of the cartel and increased production. This creates an incentive to cheat. Few cartels stand the test of time. Eventually a company or country chooses to increase production to gain market share and increase its short-term profit. In other words, in the long-run, cartels have less market power than monopolies.

Countries can ban together to form a cartel. OPEC, (Oil Producing and Exporting Countries) is the best-known cartel. OPEC's 11 members are listed in the box below. OPEC was established in 1960 to set production limits and control the price of petroleum. It was very successful in the 1970s, but since then members have frequently violated their agreement. Usually it is when crude oil prices drop, or political tensions increase. Qatar had been a member of OPEC since 1961, but left the cartel in January 2019. It is unlikely Qatar would have resigned if it were not for some political pressure and the desire to increase its production of natural gas and crude oil. 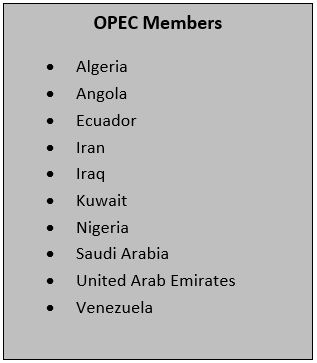 Dig Deeper In These Free Lessons: