A distinction between inflation and an index that measures inflation such as the CPI or PPI is that inflation is for the economy as a whole, whereas indexes measure inflation for a specific group. Indexes are useful when evaluating how a particular group has been affected by inflation.

Economists also use indexes to measure inflation because they make it easier to compare price levels between any two years. The cost of the market basket has already been determined and factored into the index. This simplifies the process, so only the CPI is needed to calculate an inflation rate. Every month, the Bureau of Labor Statistics releases the latest CPI. For example, if the CPI is 101 in year 2 and 129 in year 22, we know that prices have increased. We can calculate the percentage change between the two values to determine the rate of inflation between the two years. We do not have to research the cost of the market basket. Using an index, like the CPI, enables a quick determination of the period’s inflation. To access a detailed report and numerous tables visit the Bureau of Labor Statistics website.

Assume the price of milk has increased from $0.95 to $4.00 between 1965 and 2013. Is milk more or less expensive in 2013 after adjusting for inflation? We can use the calculator furnished by the Bureau of Labor Statistics at the link below to express the 1965 price of milk in 2013 dollars. This calculator determines the change in a dollar’s value over time by using the consumer price index.

The 1965 price ($0.95) is entered for the price during the year of origin (1965), and 2013 is entered as the end year. A gallon of milk in 1965 costs $7.03 in 2013 dollars. This is more than 2013’s price of approximately $4.00 a gallon. We conclude that the price of milk has increased less than the general rate of inflation, so milk was relatively less expensive in 2013 than it was in 1965. Use the calculator provided by the Bureau of Labor Statistics to compare inflation-adjusted prices between goods and services. 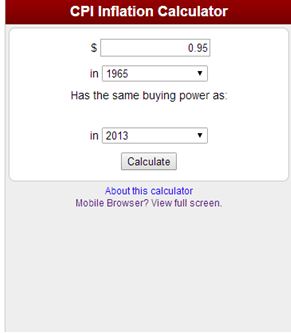 This image was copied directly from the Bureau of Labor Statistics website.
Calculating the inflation rate is theoretically simple, but in reality, the task is daunting. The prices of one period are compared to the prices of another period. The change in the average price is the inflation rate. But what items and what prices are used to get a good sample? The government uses “imaginary” market baskets which contain a standard set of goods and services commonly purchased by consumers. This is used to track changes in the cost of living. The costs of the identical market baskets from different periods are compared. The inflation rate is the percentage change in the total cost of the two baskets.

When calculating the US’s consumer price index, the Bureau of Labor Statistics is challenged to identify what should go in the market basket. If the items do not accurately represent what consumers buy, the calculated inflation rate will be inaccurate. Today, there are approximately 200 categories divided into eight groups in the market basket used to calculate the CPI. Each item is weighted by the probability that it will be purchased. For example, people buy food more often than they do clothes, so food is assigned a higher value than clothes. The table below shows the market basket categories and their weight in December 2013. 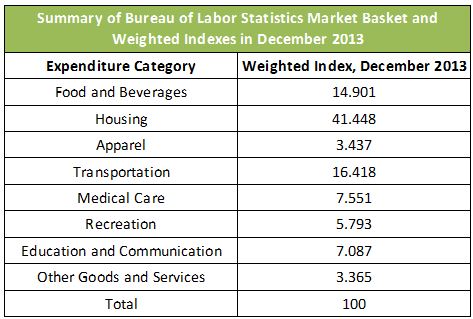 The CPI accounts for changes in spending patterns over a short period. (The market basket is periodically adjusted to reflect changes over longer periods.) As the price of a good rises relative to inflation consumers will purchase fewer of that good. The consumer may substitute another good. This change is not reflected in the market basket used to calculate the CPI.


Finally, the CPI does not take into consideration quality. For example, a car may have cost $2,000 in the 1970s, but it lasted an average of three years. Today a similar car may cost $12,000 but last for seven years. The CPI would measure the relative prices without considering the difference in quality.