Contractionary fiscal policy includes any fiscal policy with the objective of relieving inflationary pressures by slowing down the economy using an increase in the marginal tax rate and a reduction in government spending.

The objective of fiscal policy is to use government spending and taxation to manage the economy. Taxes are primarily used to fund government operations, but, in most economies, taxes are also used to redistribute income. The amount of a tax and how each taxpayer will respond to any change in the tax laws are important considerations for discerning the effectiveness of a specific fiscal policy.

A government may administer contractionary fiscal policy when the economy is overheated. An overheated economy is prone to unacceptable levels of inflation, shortages in available workers, and investment bubbles such as the real estate bubble that triggered the Great Recession. Contractionary fiscal policy includes raising taxes, decreasing spending, or a combination of the two. These actions reduce an economy’s aggregate demand. Businesses slow production as their inventories increase. They may lay off workers or have their workers work fewer hours to produce less. Incomes fall, and households curtail spending. Businesses delay hiring or investing in new equipment. Businesses lower their prices to reduce their growing inventories.

The graph below illustrates the use of contractionary fiscal policy. The economy is overheated, which means it is operating beyond its long-run sustainability as represented by the long-run aggregate supply curve (LRAS). The economy’s aggregate demand (AD) is AD1, and its short-run aggregate supply is SRAS. The price level is at PL1. Note that any increase in the aggregate demand would result in inflation and a minimal increase in the economy’s real gross domestic product (RGDP). A contractionary fiscal policy is administered by increasing taxes and cutting spending, which causes the aggregate demand to shift to AD2, bringing the economy into long-term equilibrium and reducing the price level to PL2. 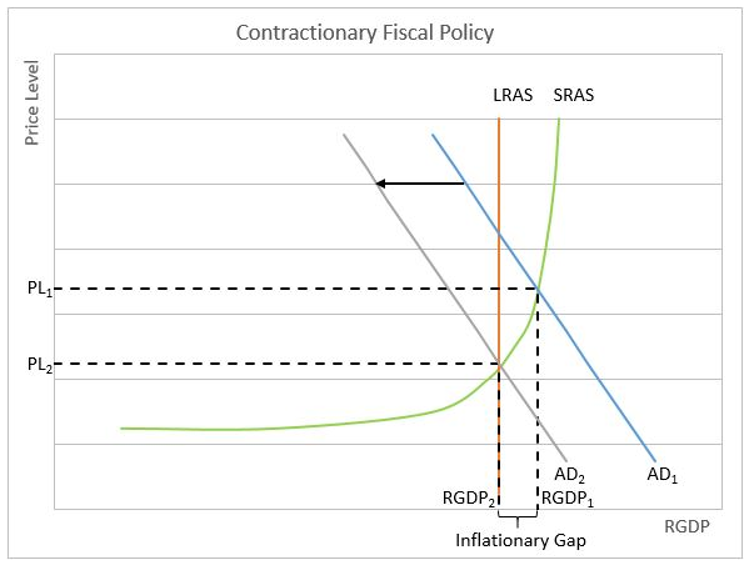 An increase in taxes reduces consumer and business disposable incomes. This is contractionary because consumers and businesses purchase less, which pushes the aggregate demand to the left. Raising taxes is politically very unpopular, so this policy is rarely used.

Fine-tuning an economy is difficult using fiscal policy. It takes time to move from the recognition of a problem to agreement on the best solution, and finally the implementation of a policy. Once implemented, it takes time for the change to be felt throughout the economy. It is entirely possible that an action may prove counterproductive if a business cycle has entered a new phase. For example, assume the economy is in an economic boom and inflation has reached 15 percent. Contractionary policy is recommended, but Congress takes an entire year before reaching an agreement on the appropriate action. A bill is passed with a combination of tax increases and spending cuts. Unfortunately, the peak has passed and economic growth has slowed before the contractionary actions are felt. The consequence is that the economy slows more than is desired, which is why most economists favor monetary policy for fine-tuning the economy.