Definition of the Crowding Out Effect:

The crowding out effect describes the negative impact government borrowing may have on the economy. Government borrowing siphons financial resources from households and businesses which pushes up interest rates and reduces business and household investment.

The crowding out effect diminishes the benefits of government spending. Interest rates and loanable funds are subject to the law of supply and demand. When a government borrows the money to finance its needs, it competes for money in the financial markets which push up interest rates. Higher interest rates may deter a family from purchasing a home or a car. They may also deter a business from expanding its facilities. Economists call this the crowding out effect because the government "crowds out" household and business investments.

A company's decision to proceed with a project depends upon its projected return on investment. At lower interest rates, more ventures become profitable. For example, assume a company is interested in expanding operations. It estimates its return on investment would equal six percent. When its borrowing rate exceeds six percent, the expansion does not make economic sense, but when the company is able to borrow the money at less than six percent, the venture may become worthwhile. Governments have a more inelastic demand for loanable funds. They borrow based on needs rather than whether or not an investment makes sense from a business viewpoint. Government representatives rarely suggest making an investment or delaying an investment because interest rates are attractive or too high.

Many economists are concerned that mounting deficits along with the public’s greater dependence on government services have increased the crowding out effect when the government siphons an increasing amount of capital from the private sector. These economists point to the difficulty policymakers have in discontinuing a program. Increases in fiscal spending should be curtailed once the economy has rebounded from a recession. Unfortunately, the political reality is once a spending measure is introduced to an area, it is hard to repeal, especially if it benefits a representative’s district. For example, there was tremendous resistance in Congress to consolidating military bases during the early 2000s. Most agreed that consolidation was helpful in reducing military spending, but representatives fought to maintain a military presence in their districts.

The graph below illustrates the crowding out effect for Country A. Initially Country A has a balanced budget and does not borrow money. Assume Country A has an interest rate of six percent, and $100 million is borrowed in the private sector. The government chooses to stimulate the economy by investing $10 million without increasing taxes and creates a $10 million deficit. Due to the inelasticity of the government's demand for loanable funds, there would be a $10 million increase in the quantity of money demanded at every interest rate. This is illustrated by a parallel shift in the economy’s aggregate demand curve to AD2. As a result, the market interest rate increases to eight percent. Total investment increases to $105 million but private investment decreases to $95 million. Fewer private investments are made because the higher interest rate resulting from government borrowing “crowds out” private investment. 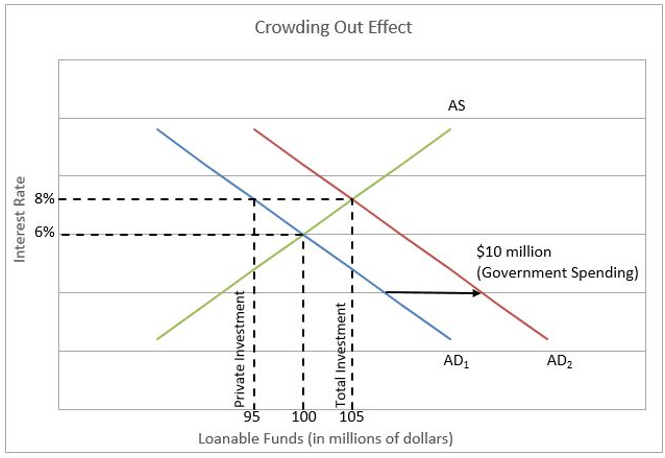 The crowding out effect may further hinder fiscal policy when used to increase economic growth if the crowding out has the effect of undoing some of the shift in aggregate demand due to an increase in government spending. This is a greater problem if government spending is on consumption-type goods as opposed to investment goods. In the short term, replacing private investment with government consumption may be fine, but it has the long-term consequences of impeding some investments.