Any payment system must have a buyer, seller, and a way to transfer payments. Suppose Roberta purchases a puppy from Jerry for $3,000 using a cryptocurrency. If Roberta pays Jerry using a check, Jerry relies on the banking system to transfer $3,000 from Roberta’s account to his account. The bank verifies that Roberta has sufficient funds. But the cryptosystem is decentralized, so there isn’t an intermediary? How can Jerry be sure Roberta really has $3,000? The most daunting task of any cryptocurrency transaction is validating that the appropriate party received the correct amount of money. Working through a transaction clarifies the cryptocurrency system.

Roberta and Jerry Open Accounts: Where is Roberta’s cryptocurrency stored without a centralized bank or security company? How is cryptocurrency obtained? Both Roberta and Jerry need a digital wallet to hold their digital currency before they can send or receive a payment. Many companies, such as Coinbase Commerce, provide brokerage accounts that help people buy, sell, transfer, and hold cryptocurrencies.

Roberta Pays Jerry: Account holders are issued a private key and a public key when opening an account. A person’s private and public keys are a matched pair. Together they enable an account holder to transfer cryptocurrency to and from accounts without a third party like a bank to verify transactions.

A private key is a large, randomly generated string of alphanumeric characters. It is like a password and allows Roberta and Jerry access to their digital wallets. Private keys should never be shared. A public key is more analogous to an email address and can be shared. Robert would pay Jerry by opening her digital wallet, specify $3,000, paste Jerry’s public key, and hit send. Once Roberta digitally signs her order, every computer in the network receives a record of the transaction. At this point, Roberta cannot reverse the transaction. Jerry would use his private key to unlock his digital wallet, which proves he is the owner of the cryptocurrency sent.

The transaction is verified: What keeps Roberta and Jerry honest? Roberta could lie and claim she sent Jerry $3,000. Jerry could claim that he never received the money or received less than he really did. What prevents Roberta from double sending cryptocurrency and spending the same $3,000 for something else? Cryptocurrency systems rely on blockchain technology to verify transactions. Each transaction becomes part of a vast ledger which is distributed to a disparate network of computers. Transactions are recorded in blocks and linked in chains, hence the term “blockchain.” Most ledger holders must confirm the verification before it is added to the blockchain, making fraud highly unlikely.

Bitcoin uses proof of work as its validation method. Miners race to verify the transaction by solving a very complex mathematical puzzle. Theoretically, anyone with a computer can be a miner. Some cryptocurrency is rewarded to the miner who first solves the puzzle. Because the reward goes to the first entity that solves the problem, miners use more and faster computers. As the processing sophistication has grown, so has the consumption of energy. The New York Times reported on September 3, 2021, that mining bitcoin consumes more power than Finland.

Jerry waits to be paid: The validation process takes time, so Jerry will not receive his payment immediately. It usually takes a couple of minutes, but it has taken several hours. Bitcoin miners averaged 8.6 minutes to validate a transaction on March 12, 2022. (Blockchain median confirmation time.)

Bitcoin is the most recognized cryptocurrency, and many large companies, including Microsoft, ATT, Pizza Hut, Tesla, and the Miami Dolphins, accept bitcoin. However, at the beginning of 2022, most retailers did not accept bitcoin. Many potential customers prefer VISA because VISA takes less than 30 seconds to process a transaction. VISA also processes approximately 150 million transactions daily, 500 times more than bitcoin. 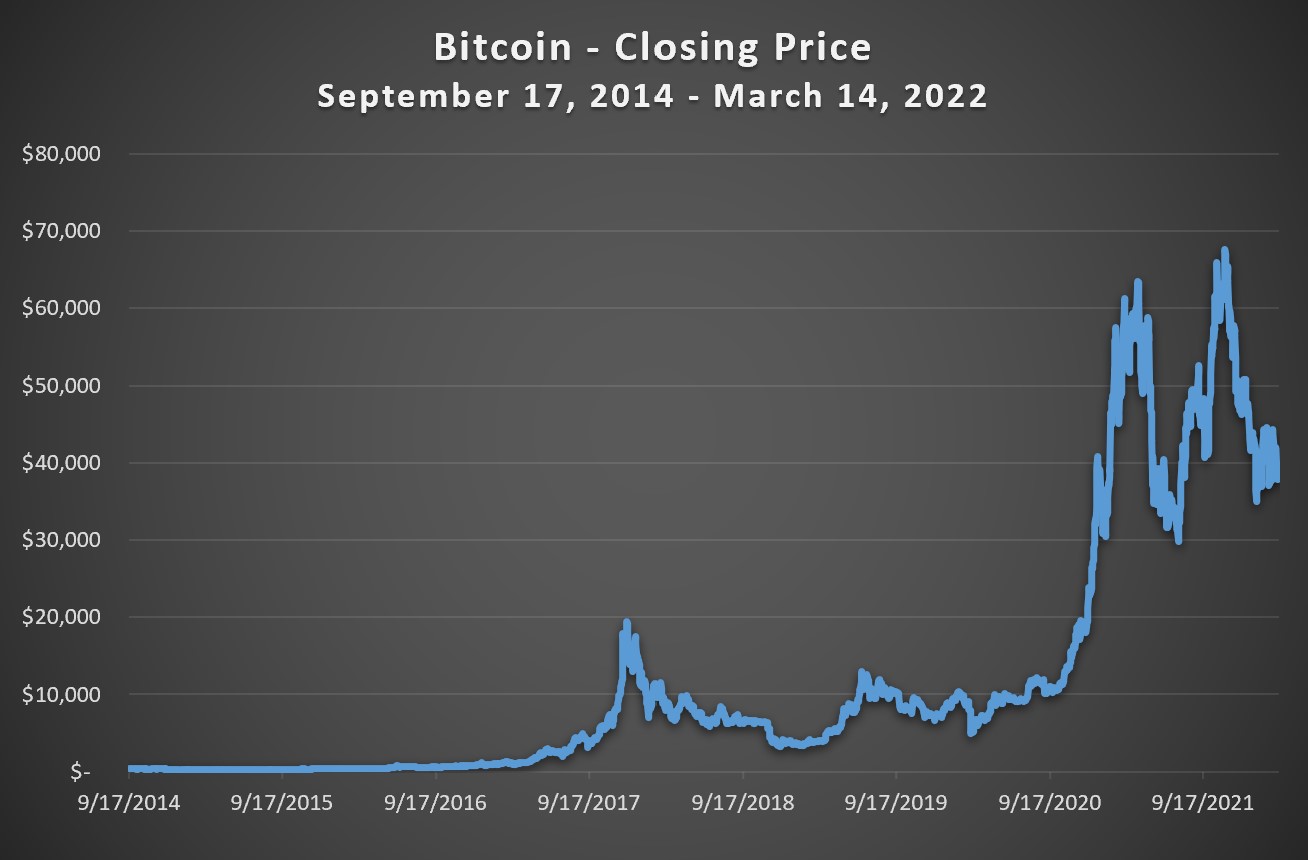 While cryptocurrency is designed as a medium of exchange, much of the excitement surrounding cryptocurrency is its value as an investment. An investor could have purchased one bitcoin for less than $200 on January 14, 2015, and sold it for $67,500 on November 18, 2021. However, Bitcoin’s price has been very volatile, making it a very risky investment. Anyone should do extensive research and consult an expert before investing in any cryptocurrency.