Definition of a Deficit:

A deficit is a shortage or deficiency, most often related to finances.

At the end of the first period, the home team had two goals and the visiting team had three. The home team's deficit is one goal. Households run a deficit if a household's expenses exceed its income. A company has a deficit if sales fail to meet its target.  A surplus is the opposite of a deficit.

A country may have a trade deficit, meaning that its imports exceed its exports. When a government has a budget or fiscal deficit, its revenues (taxes) are less than government spending. A budget surplus exists when tax revenues exceed spending. Government spending is financed with a combination of collecting taxes, issuing debt, or printing money. Choosing how to pay for increased spending or a growing deficit is a dilemma. Raising taxes is unpopular and will likely slow economic growth. Printing money is inflationary, and issuing debt increases the government's interest expense and may crowd out business investment. Finally, governments may reduce their deficits by reducing spending, but doing so may prove to be political suicide because the recipients feel entitled to the money they have grown accustomed to receiving. Since 1970 the only period the US government had a surplus was from 1998 through 2001. Recently, financing the wars in Iraq and Afghanistan during a recession has pushed the US budget deficit to record levels. The graph below shows the rapid growth in government spending and the historic relationship between government spending and revenues. 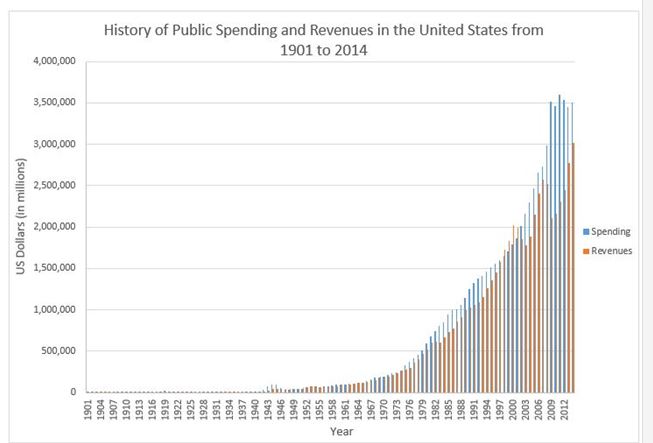 Most economists agree that the United States must reduce its deficit. They believe the costs of health care, social services, and military spending are too high. Knowing that spending is too high is easy. Reaching a consensus on how to reduce the deficit is the greater challenge because different ideologies influence our politicians' views of what services should be cut or who should pay a tax increase.