Demand-pull inflation is inflation caused by an increase in an economy’s aggregate demand. 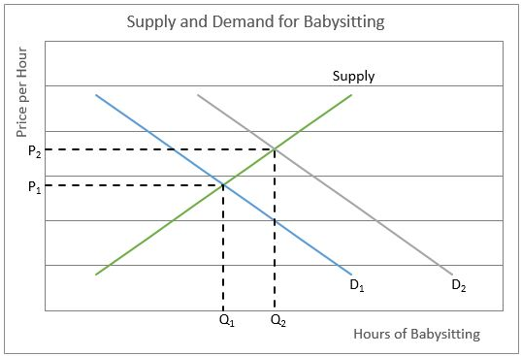 You are not alone. Most other businesses experience similar growing demands and raise their prices. Many also increase production. This is demand-pull inflation. Demand-pull inflation is inflation caused by an increase in an economy’s aggregate demand, or the total demand for final goods and services that consumers (domestic and foreign), the government, and businesses are willing to purchase at a given price level during a specific time period. Inflation occurs when the increasing aggregate demand outstrips any increase in the aggregate supply.

During a recession or early recovery, the economy is operating in the flatter area of the aggregate supply curve because plants have excess capacity. There are many unemployed workers. There is a surplus of inputs such as labor and natural resources so prices remain stable, or may even decline. Businesses compete more aggressively for the limited business and are less likely to raise their prices. When the aggregate demand increases, companies respond quickly by increasing production, while remaining cautious about raising prices. Graph 2 illustrates this where A is the initial equilibrium. Aggregate demand increases from AD1 to AD2. Point B is the new equilibrium. Prices increase modestly from PL1 to PL2 and production increases from RGDP1 to RGDP2.

As the economy expands, factories invest in equipment and hire more workers to produce enough to meet the higher aggregate demand. Businesses increase wages to retain and attract the workers they need. This again spawns another round of increased demand and prices.

Now assume the economy is nearing the peak of a business cycle. Plants are operating near capacity. The growing demand for inputs bids input prices higher. A shortage may even develop. The economy nears its natural level of production where all resources are being used in an efficient manner. The short-run aggregate supply curve becomes very steep. Increases in the aggregate demand are very inflationary and have a minimal impact on production levels. Graph 3 has the same AD curves and SRAS as Graph 2. The increase in the AD is equal to the increase in Graph 2. Note that the increase in the price level from PL1 to PL2 is much greater on Graph 3, and the increase in the output from RGDP1 to RGDP2 is less than on Graph 2 because the intersection with the SRAS is on a steeper part of the curve. The inference is an increase in the AD when an economy is near the peak of its business cycle is much more inflationary than when it is beginning its recovery from a recession.

Note that real gross domestic product increases on Graphs 2 and 3. Economists favor demand-pull inflation because it normally occurs during expansionary periods when there is an accompanying increase in production. This is in contrast with cost-push inflation where the price level increases because a supply shock increases the production cost of most goods and services. Producers cut back because they are willing to supply fewer goods as their costs increase. An economy is either stagnant or contracting following a supply shock that causes cost-push inflation.

During the Great Depression, a decreasing aggregate demand pulled the price level lower. Prior to the Great Depression, the Roaring 20s was a period of prosperity, but people became overextended and the bubble popped. Banks failed. People panicked and were reluctant to spend. The AD dropped, reducing the quantity demanded for most goods and services. Businesses responded by cutting their workforce and investment spending. The AD spiraled down further. RGDP and the price level fell. This was a period of demand-pull deflation because the drop in the AD pulled the price level lower.

Here's a fun video that explains this concept more