A Demand Shock is an unexpected event that results in a sudden and dramatic change in the economy’s aggregate demand or the demand for a good or service.

Sudden events such as natural disasters, wars, terrorism, or political decisions can cause a demand shock, which can reverberate throughout an economy. When the COVID-19 pandemic pushed governments to issue stay-at-home orders and other containment measures there was a demand shock. Immediately consumer spending (aggregate demand) plummeted. In April 2020 consumer spending fell over 13%, and the consumer price index decreased 0.8%. The changes were sudden and dramatic. Prior to the pandemic, the economy was growing approximately 2.0% annually. Consumer spending the strongest component of the economy had consistently increased since 2014. Prices were beginning to increase at a larger clip. But then, there was a demand shock and the economy’s aggregate demand decreased, resulting in a drop in the economy’s output and price level.

The graph below illustrates what happened. The containment measures caused the economy’s aggregate demand to shift from AD1 to AD2. Output, as measured by real gross domestic product (RGDP) fell from RGDP1 to RGDP2, and the price level decreased from PL1 to PL2. Because a demand shock is sudden, there is no change in the supply curve, so the short-run aggregate supply curve (SRAS) remains unchanged. The reduction in output results in layoffs. 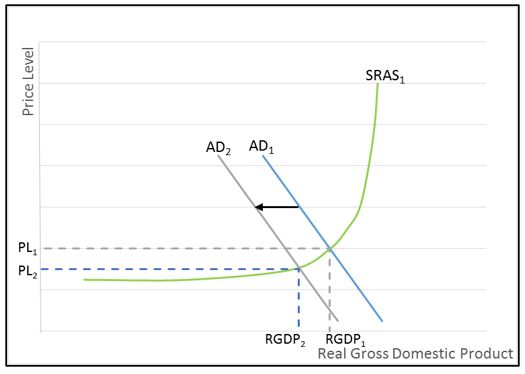 Fortunately, these periods normally do not last very long. Companies and consumers are quick to adapt and usually the threat causing the demand shock disappears. But some economists fear the demand shock caused by COVID-19 may be prolonged without a cure or vaccine, and the economy could spiral into a lengthy recession.

A region may be hit with a natural disaster that causes a demand shock. For example, the demand for bottled water immediately increases following a hurricane. In addition, the demand for building supplies and skilled labor normally increases suddenly as a hit region rebuilds from the hurricane’s devastation. In these cases, the price of bottled water, building supplies, and skilled labor increases. On a graph, the aggregate demand curve would shift to the right, production would increase, and the price level would jump. But communities adapt and eventually production and the price level return to normal.