The Federal Reserve's discount rate is the interest rate that the Federal Reserve Banks charge when commercial banks and other depository institutions borrow from the Fed at its discount window. This rate should not be confused with the rate financial analysts use when calculating the net present value of an investment.

The Federal Reserve is the lender of last resort. Banks can go to the Fed’s discount window when they need to borrow money to strengthen their reserves. Borrowing at the Philadelphia discount window increased from $1 billion in 2007 to $2.3 trillion in 2008, the year of the Great Recession. This added much needed liquidity to the economy. (Read Philadelphia Fed - A Window Into The Financial Crisis for a detailed explanation of how the discount window was used to avert a financial crisis during 2008.)

Imagine you manage Cloudy Bank and your excess reserves are a bit lower than you feel comfortable with. You are about to release the bank’s financial statements and know that they will not be well received and are concerned several of your major depositors may withdraw their funds. You do not want to risk having your reserves drop below the required minimum. You know that Windy Bank has a lot of excess reserves. Windy Bank has been accumulating reserves because its management anticipates closing some large loans within the next few days. What would you do? One solution is to borrow some of Windy Bank’s excess reserves on a short-term basis. Windy Bank likes that idea because these reserves would earn some interest. 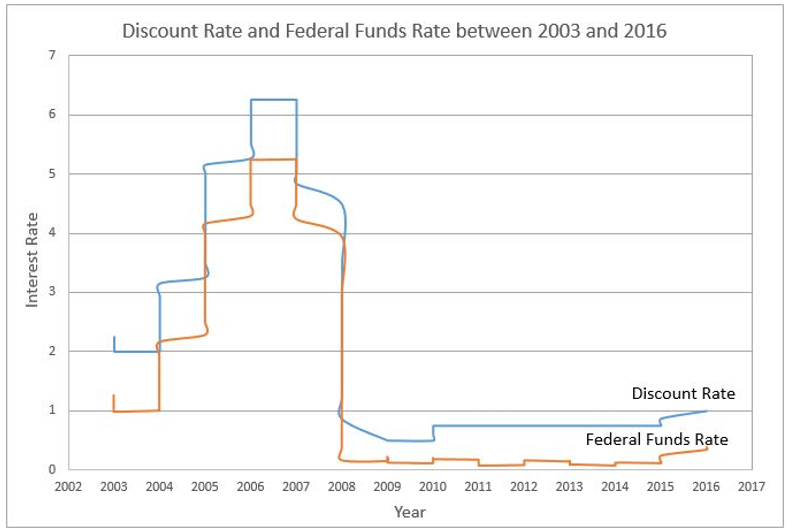 During recessions or periods with a lackluster economy, the Federal Reserve will lower the discount rate and the federal funds rate. Lower interest rates flow through the economy and spur economic growth. Conversely, these rates are increased when the Federal Reserve is fearful of inflationary pressures from an overheated economy.