A duopoly is an oligopoly with only two companies.

An oligopoly is a market structure where a few companies control an industry. In a pure duopoly there are only two companies. However, economists may refer to some industries as duopolies if two businesses control an overwhelming majority of the market. Examples of duopolies include Master Card and Visa in the credit card industry, and Boeing and Airbus in the commercial airplane market.

Companies in duopolies are very aware of actions taken by their competitor. They compete vigorously, but normally price competition is avoided in fear of starting a price war. Instead, they compete in the product image, service, and the attributes of their product.

Game theory illustrates how a price war can erupt when duopolies compete on price. Assume the small community of Hungryville only has two restaurants. One is owned by Bob and the other is owned by Kathy. They have very similar menus. Table 1 is the payoff matrix showing all the possible outcomes for Bob and Kathy assuming each has only two pricing options: price high or price low. Each is affected by the other’s decision. Bob’s profits are shown in purple and Kathy’s profits are in green. 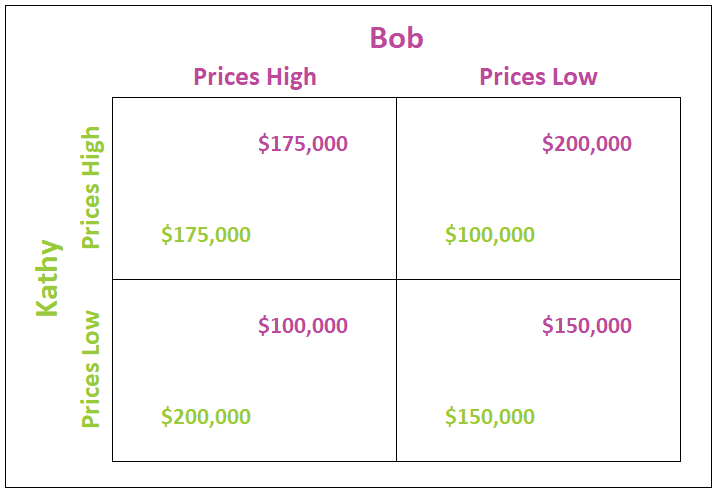 How will Bob and Kathy set their prices? If both price high, both would earn $175,000. This is seen in the upper left quadrant. Assume Bob wants to attract more customers. He could price low, and if Kathy chooses to price high, she would lose business to Bob and her profit would fall to $100,000. Bob would have more business and his profits would equal $200,000. This outcome is shown in the upper right box. Another possibility is that Kathy prices low hoping to gain market share. If Bob prices high, his profit would drop to $100,000 while Kathy's earnings would equal $200,000. This scenario is represented in the bottom left box. The final possibility is that both Bob and Kathy price low, in which case they would both earn $150,000. This outcome is portrayed in the bottom right box.

It is likely both owners will lower their prices either because they fear the other will price aggressively or they have an aggressive marketing plan. If Bob believes Kathy will choose to price high, then an aggressive marketing plan (pricing low) will enable him to increase his profit from $175,000 to $200,000. This decision is highlighted by underlining $200,000 in the first row in Table 2. Bob would also price low if he believes Kathy will price low. Here he is motivated by fear of losing market share. He would prefer earning $150,000 to $100,000. $150,000 is underlined to draw attention to this decision.

Kathy is confronted with the same choices. Her options are seen in the columns. If she believes Bob will price low she will also price low to protect her market share. (These choices appear in the first column.) Kathy would also price low if she believes Bob will price high because she would earn $200,000. Kathy's decisions are underlined in green. It is clear that pricing low is the dominant strategy for each player. A price war may ensue if one responds by continuing to lower prices. 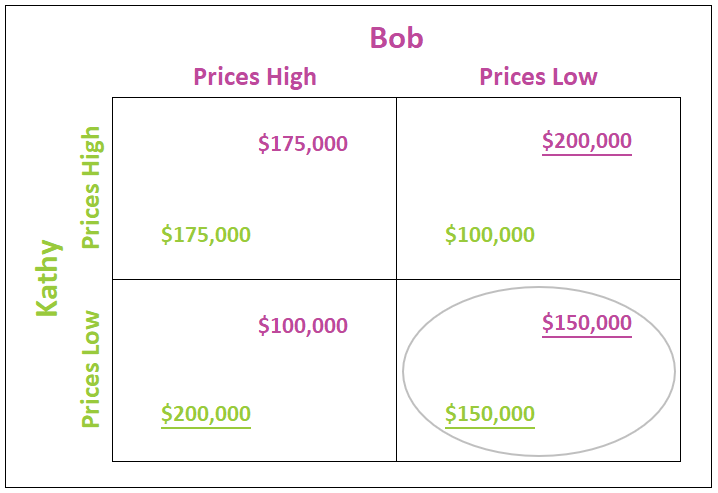 Recognizing their dilemma, Bob and Kathy may choose to collude. Collusion occurs when two or more competitors agree to reduce competition in the marketplace by acting jointly to set prices, reduce output, or divide the market. Explicit collusion is illegal because it violates anti-trust laws. Explicit collusion occurs when companies officially agree to work together. In these cases, there are often records of meetings or signed agreements documenting the terms of the collusion. Tacit collusion, on the other hand, is when companies “agree” to collude without getting together to officially hammer out details.

The more likely outcome is that Bob and Kathy would differentiate their services rather than compete on price. Perhaps one would choose to offer more of an Italian fare, while the other serves traditional American. Or one could choose to become a sport’s bar, while the other remains a family-style restaurant.