Economic efficiency is the theoretical point where all resources are being used in the best interest of society. If an economy is operating at capacity, an increase in the production of one good or service, say Good Y, must result in a trade-off and a drop in the production of another good or service, say Good X. In this scenario, the company manufacturing Good X would be hurt. 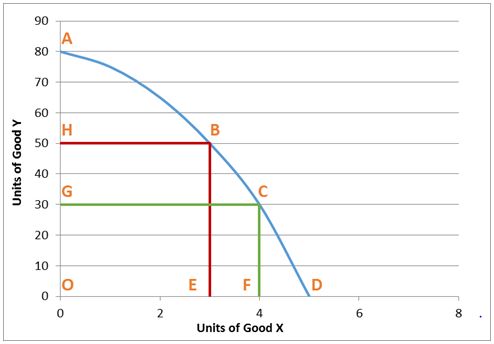 Economic efficiency is approached when supply and demand are in equilibrium. When there is a shortage of a good, society would like more resources allocated to producing that good. Suppliers are “leaving some money on the table” by not producing the amount society would be willing to purchase. Recognizing this suppliers increase production. Consumers gain from the elimination of a shortage. Economic efficiency is improved because society's resources are being allocated to meet consumers' needs. A surplus results when too many resources have been allocated to produce a good. Waste results in economic inefficiencies. Consumers pay more than they need to for the larger quantity of the good. Eventually, market forces push prices lower. The lower prices force those inefficient (higher cost) producers to leave the market. These are the companies who were enticed to enter the market by the higher price. Eventually, only the most efficient producers remain and waste is minimized.

Producers strive for efficient production of a good or service in order to reduce their costs and maximize profits. In an economy, economic efficiency is approached when as much as possible is produced with the scarce resources available. For a business, this means that waste and costs are minimized. Efficient producers have an advantage over their competitors because they are able to minimize waste and cost. Costs may be in material or savings accrued from less time in production. Consumers benefit from the market forces that eliminate shortages and surpluses while minimizing prices.

Shortages and surpluses are indicative of economic inefficiency. Idle factories and high unemployment are also signs that an economy is operating at less than capacity and falls short of achieving economic efficiency.

When operating at economic efficiency, any change in the allocation of a resource would hurt someone else because it is impossible to increase the welfare of a person, company, or community with the available resources. Imagine a community with 1,000 residents. Assume, economic efficiency is achieved when the available food is allocated to satiate each member of the community. However, economic inefficiency exists if some go hungry, while others discard some of their food. Achieving economic efficiency is a worthy goal for every business and country. While impossible to achieve, it is fortunate that the forces of supply and demand push an economy in that direction.