Cindy and Joyce are sisters. Their father, George, decides they need to earn some spending money. George determines the girls need to have a lemonade stand and that they should charge $1.00 per glass. He also decides the girls should produce three gallons. No one in the neighborhood sells lemonade, so he assumes there must be a demand. The girls are excited for the opportunity to earn money and set up their stand. They eagerly anticipate customers, but none come. The few neighbors who do stop by do not make a purchase after they see the price. The lemonade spoils, forcing the girls to discard it. George is infuriated with his neighbors. That evening he marches over to several of his neighbors’ homes and commands them to buy his daughters’ lemonade the next day. The following day the sisters rise early to make the lemonade and set up their stand. They are encouraged when a few of the neighbors stop and buy a glass. However, disappointment returns when the stream of customers dwindles to barely a trickle. One neighbor advises the girls to lower their price to $0.25 a glass. Reluctantly they do after getting the consent of their father. That afternoon they are overwhelmed by the positive response. Neighbors line up to buy a drink! The sisters quickly run out of lemonade.

Cindy and Joyce experienced the dynamics of an economic system. Their father, in an effort to help, created a command economy. He dictated the price and production and tried to command the neighbors to purchase the lemonade. History has taught us that command economies result in much frustration and waste. Cindy and Joyce learned that by adjusting their price they could sell more, waste less, and earn more money. In a market economy, market forces determine the price of goods, the quantity produced, and their distribution.

Most of us live where we take it for granted that we will be able to purchase what we want when we visit a store. We often do not take time to think about the existing economic forces that enable us to have access to such a wide variety of goods at virtually any moment. Take a moment to ponder these questions: Who decides what is produced? Who will produce a product? How will the product be produced? How will the product be distributed? What will the price be? Countries rely on economic systems to coordinate the production and distribution of goods and services. There are three general classifications of economic systems: traditional economies, market economies, and command economies. But rarely does a country’s economic system fit neatly into one category. Instead, most economies have mixed economic systems. A mixed economy blends characteristics of the command and market economic systems. It is an economic system that has a combination of a market economy by allowing the private ownership of capital, with government intervention when it deems that it is in the public interest. Some governments, like the United States, have a bias in favor of a market economy, but the US government still imposes regulations and has a tax structure to try to redistribute income to the poor. Other countries, like China, lean toward the command economy, but during the past two decades the Chinese government has stepped up efforts to encourage private investment.

Traditional economic systems rely on cultural traditions to govern the production, distribution, and consumption of goods and services in a society. In these societies, people primarily rely on bartering, farming, and hunting and gathering. Their family ties are of critical importance to their place or "station" in life. Family and gender determine many facets of individuals' lives, including job, economic status, and social status. The table below summarizes the differences between market, command, and traditional economic systems. 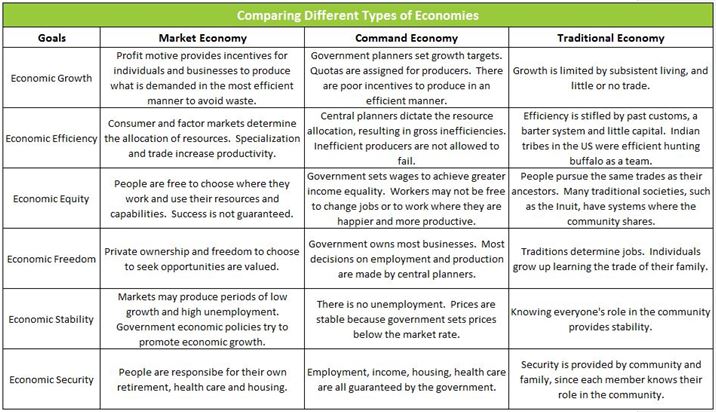