Definition of Economies of Scale:

Economies of scale exist when a company gains a cost advantage by increasing its output.

Economists refer to economies of scale when discussing the advantages of capital investment. A capital investment in equipment can enable a company to increase output while improving productivity and lowering the average cost because the fixed costs are spread over a larger number of units. When the economies of scale are enormous, it can result in the formation of an oligopoly or even a monopoly, such as the investment to build a nuclear power plant. 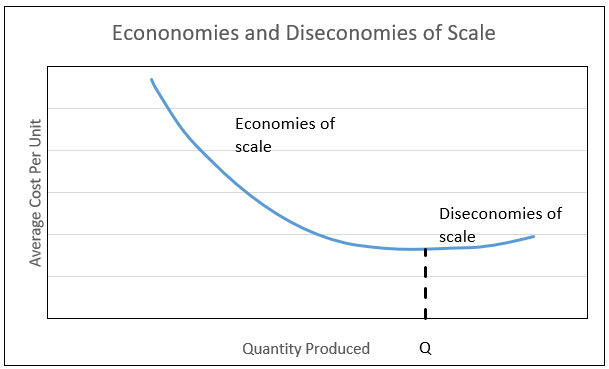 Listed below are several examples of companies benefiting from economies of scale. In each case, a higher output results in a lower average cost to produce a good or service.

Diseconomies of scale are the opposite of economies of scale. A point is reached where a company’s total average cost increases when output grows. On the graph above this is where output exceeds Q. For example, the cost of a raw material may increase if the supply of the material from a local source is stretched and the manufacturer is forced to pay a higher price for the material from another supplier that is further away. Decision making may be impeded by the levels of bureaucracy that exist within a large company. Companies with many employees may experience a rise in absenteeism because workers believe they can be easily replaced. Employees may feel unimportant or lost and not sense the need to work efficiently or make suggestions to improve operations. Coordination in the manufacturing process becomes more challenging as production increases – especially if it involves several manufacturing plants.