An exchange rate equals the rate that one currency is exchanged for another currency.

When Tesla sells a car manufactured in the United States to a German car dealership, Tesla expects to be paid in dollars, not euros. Likewise, if an American company opens a plant in Mexico, pesos are needed to acquire the land, build the factory, and pay the local workers. In each case, there is an exchange of currency. The German dealership purchases dollars using its euros, and the American company purchases pesos for dollars. Both companies would complete their transactions in the foreign exchange market, an over-the-counter market where currencies are traded. On February 23, at 9:34 EST, one euro was worth $1.134. One dollar could purchase 20.202 pesos, or one peso was worth $0.0495. Traders can access a current exchange rate table for most currencies at X-Rates.

The exchange rate between two countries influences trade between those countries. For example, a Tesla selling for $50,000 would cost €44,100 on the morning of February 23, 2022. If the exchange rate moves to where $1.00 is worth €0.9 (or €1 purchases $1.111), the same vehicle would cost €45,000. In this case, the dollar has appreciated or strengthened relative to the euro because one dollar purchases more euros.

Who benefits, and who is harmed by the appreciating dollar? The German buyer is hurt because imports from the United States cost more. Tesla’s exports to Germany would fall. But American consumers would benefit because German cars would be less expensive in the United States.

What determines the exchange rate? Exchange rates are determined in the foreign exchange market by supply and demand. The price of one currency relative to another (the exchange rate) is on the vertical axis, and the quantity of the other currency is on the horizontal axis. The peso market is graphed below. 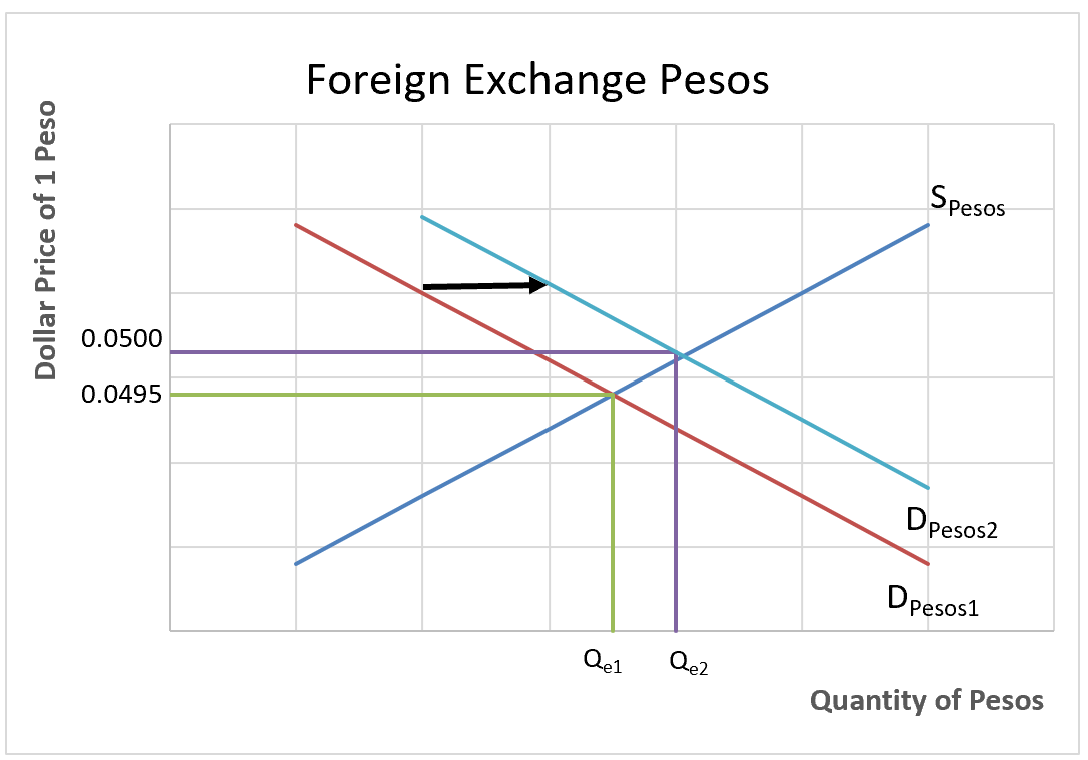 The demand curve for pesos is for people who may purchase pesos with another currency. It includes foreign buyers of Mexican goods and services, investors of Mexican financial assets, and speculators. It does not include residents of Mexico who are paid in pesos and purchase goods and services produced in Mexico. The demand curve slopes downward to the right because Mexican goods and services are less expensive in the US when pesos become less expensive in relation to the dollar. Americans can buy more Mexican goods per dollar, so the quantity of pesos demanded will increase. The supply curve for pesos represents individuals or companies who hold pesos and may want to sell pesos for another currency. It slopes upward to the right because Mexicans will purchase more US goods when the dollar price of the peso rises. If Mexicans purchase more US goods, they supply more pesos to the foreign exchange market.

On February 23, the equilibrium exchange rate equaled $1 for 0.0495 pesos. Suppose a change in Mexican leadership and tax encourages many American companies to expand their manufacturing in Mexico. Pesos are required to purchase the land, build the plant, and pay their Mexican employees, so American companies must exchange dollars for pesos boosting the demand for pesos, which shifts the demand curve from DPeso1 to DPeso2. The increase in demand results in a higher exchange rate; in this case, $1.00 now purchases 0.0500 pesos.

Like most countries, Mexico and the United States have a floating exchange rate, which is determined by supply and demand. Some countries fix their exchange rate, usually pegging it to the dollar. But even in these cases, the law of supply and demand influences the exchange rate. Saudi Arabia pegs the riyal to the US dollar at an exchange rate of 3.75 riyals per dollar, or .2667 dollars per riyal. Suppose there is a surplus of riyal at the equilibrium exchange rate, as shown in the graph below. The government would reduce the supply by purchasing riyal using dollars held by its central bank to keep the riyal from falling. If the equilibrium rate is above the peg rate, there would be a shortage of riyals, and the government would sell riyals. 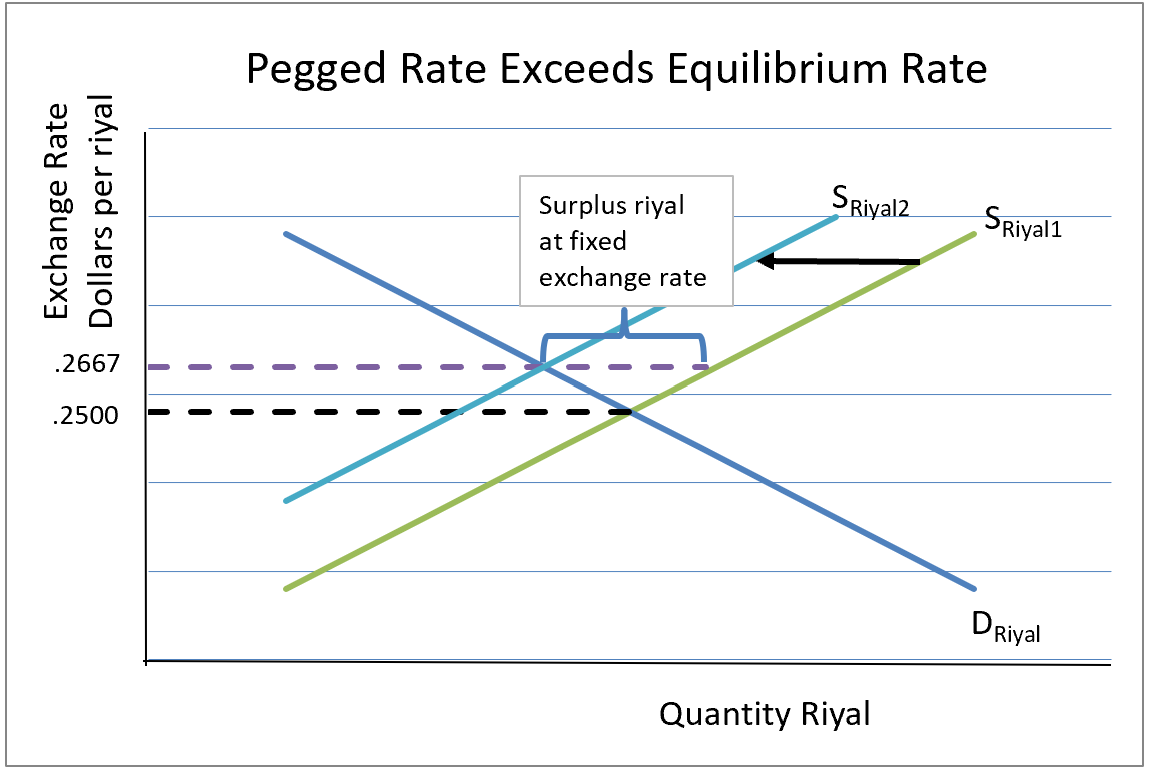 Changes in an exchange rate can have an enormous impact on an economy, especially when much of an economy’s business involves trade. A depreciating currency may benefit countries and companies by increasing exports and employment. But the price of imports would rise. An appreciating currency would have the opposite effects. Policymakers in countries like Japan that rely on exports strive to maintain a stable or slightly depreciating currency relative to the United States dollar. However, policymakers in countries that depend on importing food and energy may endeavor to maintain stable or appreciating exchange rates relative to the US dollar.