Expansionary monetary policy is orchestrated by a central bank with the objective of stimulating economic growth by increasing the money supply.

Following the 2008 financial crisis, mortgages, car loans, and most other types of loans became more difficult to secure following the 2008 financial crisis because underwriting became more stringent. As a result, consumer and business spending slowed, decreasing the economy’s aggregate demand (AD). Factories had excess capacity. Many people lost their jobs. Other workers were forced to accept lower wages, underemployment, or part-time work. The economy entered a recession. 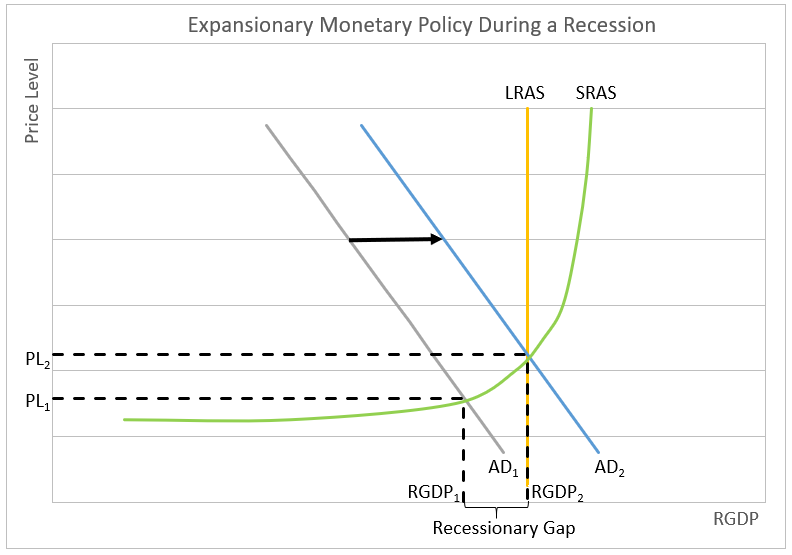 During recessions, the Federal Reserve chooses to use expansionary monetary policy to move the economy closer to its capacity. By either reducing the reserve requirement or dropping the discount rate or lowering the federal funds rate, it can increase the money supply and cause interest rates to fall. Businesses and consumers respond by spending more. Lower interest rates encourage business expansion. More consumers purchase homes or buy cars. Workers return to their jobs. The aggregate demand moves to AD2. Output increases to its long-run equilibrium of RGDP2, and the price level increases to PL2.

The FOMC reduced the federal funds rate to near zero percent during the Great Recession in the late 2000s. However, consumer and business spending remained weak prolonging the recession. The cost of an expansionary policy is inflationary pressure. Pressure is minimal early in a recovery but increases when nearing the long-run equilibrium. As production nears capacity, fewer qualified workers are available and workers usually can negotiate higher wages. Businesses are able to charge more for their goods and services. On the graph, this is visible when comparing an increase in AD on the flatter portion of the SRAS to a similar increase on the steeper portion of the curve. There is a smaller increase in the price level when the economy is operating to the left of the LRAS or flatter portion of the curve.