Explicit collusion occurs when companies officially agree to work together, usually to maximize joint profits. Records of meetings or signed agreements documenting the terms of an agreement usually exist.

A monopolist can set production where profits are maximized. Because there is one producer, a monopoly does not need to be concerned about competitors lowering their prices or increasing production. The graph below is a monopolist’s graph. It shows how a monopoly can limit production to increase the market price. Oligopolies may enter a collusive agreement. Usually, their objective is to behave as a group like a monopoly and increase profits by limiting production and raising prices. 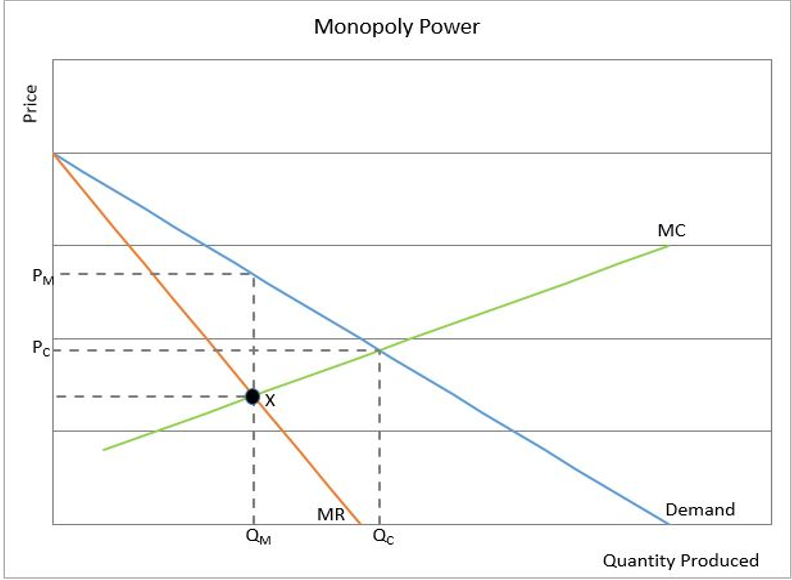 Production in the graph's industry would be reduced to QM from QC, which would be produced in a more competitive environment. A higher price of PM (compared to PC in a more competitive industry), can be charged because of the lower quantity produced. Collusive agreements try to mimic the monopoly by reducing production to QM and increasing the price to PM.

The challenge is getting all the companies to agree on how much each party will reduce their output and what they will charge. It may be relatively easy to reach an agreement between a few companies to establish production quantities. The larger the number of companies, the more difficult it is to collude. Explicit collusion is usually illegal. Anti-trust laws prohibit discussing pricing or production quotas between competitors. Many companies have been found guilty of colluding to reduce competition. Apple was found guilty of colluding with publishers to increase the price of e-books in 2013. Roche tried to fix the prices of vitamins in the 1990s. Major league baseball owners were found guilty of collaborating to restrain the escalation of wages for the league’s best players between 1985 and 1987.

Explicit collusion results in the creation of cartels. A cartel is an organization of separate entities that collude to increase the profits of its members by some combination of limiting output, price-fixing, and market allocation. By working together, cartels can achieve monopoly power. Private cartels are illegal in most countries because they obstruct competition.

In contrast, tacit collusion is when companies “agree” to collude without getting together to officially hammer out details. Tacit collusion is frequently legal. Businesses can send signals. For example, a high-ranking manager in a company may speak to the media or at a trade show. She may say that costs are rising, and a price increase may be necessary in the future. Her real audience is likely her competitors.

Even when collusive agreements are legal, they don’t always form. Why? Companies have an incentive to cheat. Most often, the cheater wants to increase its sales and market share, so it reduces its price to less than the agreed-upon price. Competitors retaliate by lowering their price when their market share is threatened, initiating a price war. Price wars usually signify the end of a collusive agreement.

Game theory can be used to illustrate the low probability of maintaining high prices. Suppose there are only two restaurants in a small community, Bob’s Diner and Kathy’s Deli, and each is presently earning an economic profit of $30,000 annually. If they priced as a monopoly they could earn $50,000. They could collude, in which case each would have an incentive to cheat.  Table 1 is a payoff matrix that can be used to predict the most likely outcome. Note that in this analysis, only the payoffs associated with the first year’s profits are considered. If Kathy and Bob can reach and honor a collusive agreement, they would split the monopoly profits evenly. In this case, they increase their profits from $30,000 to $50,000, as shown on the bottom right quadrant in Table 1. 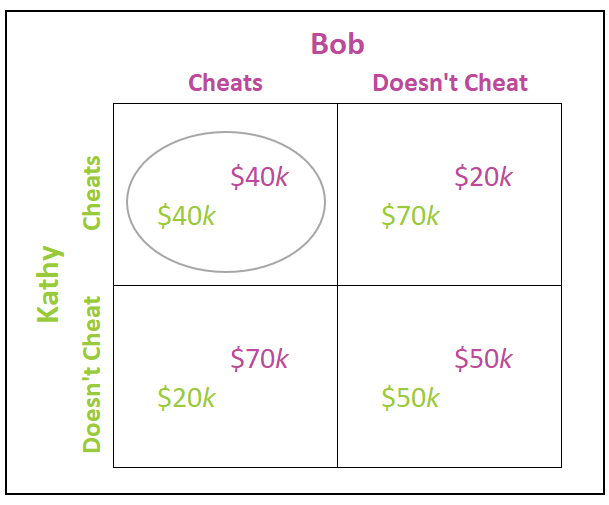 Let us examine Bob and Kathy’s incentive to cheat. Suppose Bob wants to increase his market share and lowers his prices to less than the agreed-upon prices. By charging lower prices, Bob reduces the total available profit from the maximum $100,000 down to $90,000. But, because Bob’s prices are lower than Kathy’s, he attracts most of the customers. Kathy simultaneously chooses not to cheat. Bob earns $70,000 while Kathy’s profit falls to $20,000, as shown in the bottom left quadrant of the payoff matrix. Kathy suffers a loss by keeping the agreement. Of course, Kathy could just as likely be the “cheater”, in which case the situation would be reversed, with Kathy earning $70,000 and Bob's profits would fall to $20,000 because he honored the agreement. This scenario is shown in the upper right quadrant. Finally, assume Kathy and Bob both break the agreement. If both players cheat, both charge less than the agreed-upon prices. For simplicity, assume $80,000 is the total profit which they split evenly. Each earns an economic profit of $40,000, as seen in the upper left quadrant.

Cheating is both Kathy and Bob's dominant strategy, which means it is likely each restaurant owner would earn an economic profit of $40,000 that year. This outcome is circled in Table 1. Note that this is more than the $30,000 they would have earned had they not colluded. But consider the following years. Clearly, neither Bob nor Kathy can be trusted to keep the terms of their agreement, so both will likely lower their prices either in fear of what the other will do or to gain market share. Price reductions by one will be matched or exceeded by the other. In other words, a price war ensues. Prices could fall to a point where Kathy and Bob will earn zero economic profit. In other words, both Kathy and Bob will earn an economic profit of $40,000 over the course of two years – $40,000 from the year in which they both cheat and zero in the second year during the price war.

Table 2 summarizes Kathy and Bob’s possible pricing arrangements over two years. Not included is the possibility that one cheats while the other remains true to the agreement. This is highly unlikely because if one party cheated, the other would be forced to retaliate to protect his or her market share. The best two-year outcome for both Kathy and Bob is to successfully collude. Both would earn $100,000, or $50,000 per year. However, using game theory to solve the simultaneous game proves any collusive agreement is likely to break down and result in a price war.