Fiscal policy involves the use of government spending and taxation to manage the economy.

Here is a quick video that explains Fiscal Policy in more detail:

Every economy journeys through business cycles. Expansionary periods occur when businesses thrive, income levels increase, and consumers and businesses spend more money. Increasing demands enable businesses to increase their prices. Unfortunately, expansions must end and recessions may follow when a country’s production decreases, resulting in workers losing their jobs. The resulting dip in consumer income leads to further declines in consumer purchases. Fiscal policy is used by the government to influence the business cycle by changing tax policies, spending policies, or both.

Economists generally agree that in time the economy will correct itself and reach long-run equilibrium, but how long will it take? John Maynard Keynes promoted an activist, expansionary fiscal policy that focused on manipulating aggregate demand. He developed Keynesian economics during the Great Depression to explain the Depression and identify a strategy to return to prosperity. During recessionary periods, Keynesians advocate increasing aggregate demand with government spending to pull an economy out of the doldrums sooner. Keynesian policies were endorsed by President Franklin Roosevelt in establishing the New Deal, which most economists believe helped pull the US out of the Great Depression. Of course, the government spending to finance the weaponry and troops in World War II also helped increase the aggregate demand. Keynes’ views still influence policymakers today.

During recessions, the government uses expansionary fiscal policy to boost aggregate demand by providing consumers and businesses more money to spend. Social Security, Medicare, and unemployment insurance are examples of government paying consumers directly. Consumers then use the money to purchase more goods and services. Reducing the tax burden is another way to increase the money consumers and businesses can spend, by reducing the amount taxpayers pay the government.

An increase in government spending is more direct. Here the government can target a demographic group or industry it wants to help. For example, an increase in unemployment insurance helps the unemployed. During his campaign, President Trump expressed his intent on investing in the US infrastructure. Companies and workers employed in building or repairing the US’s infrastructure directly benefit, but the benefits are shared because the workers use their added income to purchase more of the goods and services from unrelated businesses. 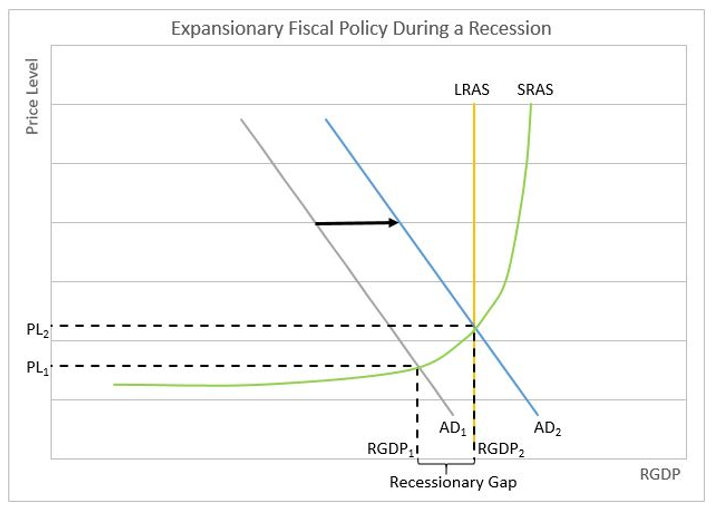 However, there is a cost. The price level would increase from PL1 to PL2. The increase in the price level is minimal when production occurs on the flatter portion of the SRAS curve. This helps explain why the fiscal stimulus following the Great Recession did not generate much inflation. However, inflationary pressures would increase if the government continued to use an expansionary fiscal policy after reaching the long-run equilibrium. Demand would exceed the normal capacity of factories, resulting in the need to pay higher wages to either attract workers away from competitors or pay workers overtime. Inflation would become a problem. This is seen in Graph 2 where the expansionary fiscal policy continues beyond the LRAS. In this case, there is a small increase in RGDP from RGDP1 to RGDP2, but a large increase in the price level from PL1 to PL2. When the economy is overheated, or at the peak of a business cycle, inflation frequently becomes a concern. During these periods an economy's output is beyond its long-term capacity. 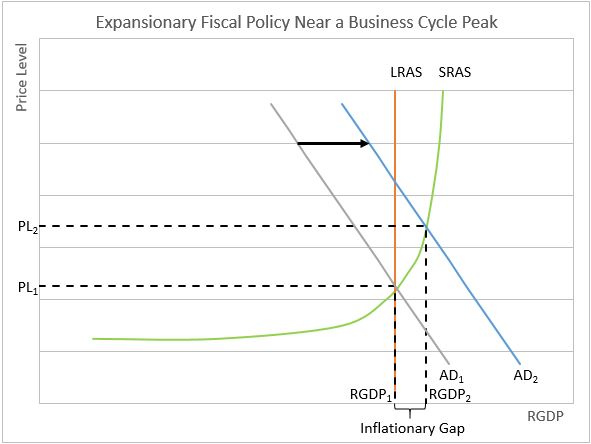 Long-distance runners must pace themselves. They can sprint for short periods but tire and ultimately hurt their performance. The same is true with an economy. Economists use similar terms such as “tired”, “overheated”, and “spent” to describe this phase. During these periods, manufacturers may defer maintenance to continue meeting demand. Workers may tire and become less productive when working overtime for extended periods. Contractionary fiscal policy is used to slow the rates of economic growth and inflation during these overheated periods. Spending is reduced and taxes are increased. The effect is the opposite of expansionary fiscal policy. The table below summarizes the actions and reasons for expansionary and contractionary fiscal policy.

A shortcoming of fiscal policy is the time it takes to implement a policy. Timing is crucial. Economists frequently disagree on whether the economy is approaching a recession, or whether inflationary pressures are short-term or long-term. After recognition, there may be a lag in deciding the best course of action.

Assume the economy is in a recession. Some in Congress may believe the economy is showing signs of recovering on its own and would promote doing nothing to stimulate the economy. Others may favor tax cuts to stimulate the economy, while others would push for increases in government spending. Getting the government to agree on a course of action may take months. Compromises may be made, which may dilute the policy. By the time a fiscal policy is enacted, the economy may have recovered. The stimulus Congress imposed may in fact be counter-productive and inflationary! It is also possible that as a recession worsens, a watered-down policy may prove insufficient. Finally, there is an operational lag. Even if a new policy is passed, it takes time to implement. Consumers must “feel” wealthier to spend. Businesses must recognize the need to invest before they actually invest. This process may take many months.

Furthermore, it is much easier for the government to spend than to cut spending. For example, Social Security is the largest budget item, but most elected officials say cutting Social Security is not a viable option. Likewise, the deduction of mortgage interest is a large tax break – but reducing the deduction is rarely considered as a contractionary tool. The result has been continued expansionary policies and a growing national debt. Adding to the national debt raises interest rates which “crowds out” private investment because higher rates discourage some business investments. Future generations are obligated to pay back the debt – again taking money away from investments that could promote long-term economic growth.