A flat yield curve describes the yield curve when there is little difference between short-term and long-term interest rates for debts with the same default risk.

A yield curve can be drawn for any debt instrument with varying maturities, but of similar default risk. Mortgages, CDs, corporate bonds, and municipal bonds are several securities that have yield curves. However, when investors speak of the yield curve, they are referring to the market for US government Treasuries. The US Department of the Treasury publishes daily yield curve rates.

When graphing a yield curve, the vertical axis is the yield to maturity and the horizontal axis is the time until maturity. Normally investors demand a higher return for longer-term investments of similar default risk. But occasionally short-term rates may exceed long-term rates. The yield curve flattens when transitioning between a normal and inverted yield curve, or vice versa. 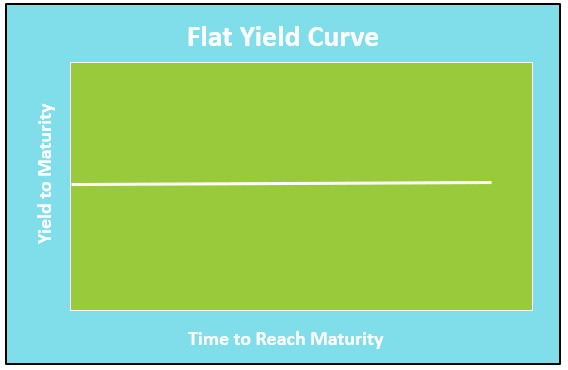