Gross domestic product (GDP) equals the market value of all final goods and services produced within a country in a given period of time.

Gross domestic product (GDP) is the most important statistic economists use to measure the vital signs of an economy and is commonly used to measure the overall standard of living of its population. GDP increases during periods of expansion, or economic growth. A recession occurs when GDP decreases. Normally GDP is stated on an annual basis, but sometimes it is provided quarterly.

Consumer spending includes money spent by households on goods and services - everything from apples to zoo visits. It is the largest component of GDP, comprising 69 percent of the United State’s GDP in 2013. Private investment spending is the purchase of an asset that is used to produce goods and services by private companies. Capital equipment, structures, and inventories are assets included in private investment. Companies acquire capital equipment to manufacture a good or assist in providing a service. Government expenditures equaled 19 percent of US GDP in 2013.This includes spending on goods and services by the federal, local, and state governments. Wages and salaries paid to government employees as well as expenditures for schools, roads, bridges, military equipment, and other public works are included in GDP. However, transfer payments such as social security, Medicare, food stamps and free health insurance are not included in GDP even though they constitute significant government expenditures because the government makes transfer payments not in exchange for a good or service but rather to help the recipients. Net exports equals exports minus imports. The net figure is included because exports are produced in the country, but not purchased in the country. Imports are purchased in the country, but not produced in the country. Since GDP is a measure of domestic production, only items produced in the country are included.

The largest world economies in 2015 were: 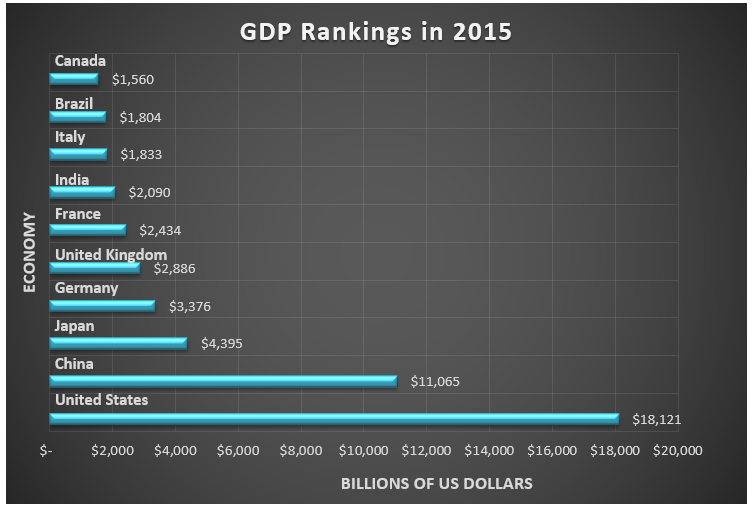 Watch the following video to see what items are, and aren't included in Gross Domestic Product:

The gross domestic product is not a perfect measure of business activity. To be included, something must be paid for and documented. Illicit transactions on the black market are not recorded, so they are not included. Volunteer work is not included because it is not paid for. For example, consider a neighborhood with similar size lots. Mom cuts her lot, but her neighbor, George hires a company to maintain his. The value for Mom's work is not included in the nation's GDP, but the money George pays to cut his lawn is included.Gross domestic product is not to be confused with gross national product (GNP). The gross national product is the market value of all final goods and services produced by a country in a given period of time. For example, BMW is a German automobile manufacturer, but has a plant in the United States. Vehicles manufactured by BMW in the United States are included in the United State’s GDP, but not the US's GNP. The vehicles are included in Germany’s GNP because BMW is a German company, but not Germany's GDP since the vehicles were not produced in Germany.

The gross domestic product is used to measure the growth of an economy over time. The figure is inflated by rising prices, so economists adjust the GDP and use the real gross domestic product (RGDP). For example, in the US, GDP increased from $1.48 trillion to $1.60 trillion between 1973 and 1974, yet the RGDP decreased from $5.46 trillion to $5.36 trillion. Why the differing conclusions? Inflation. Inflation was 11 percent in 1974. Figures must be adjusted to a common year. In this case, the prices are chained to 2009 dollars. (This explains why the real gross domestic product figures are higher.) Many use the gross domestic product as a measure of a country’s standard of living. It does measure material wealth, but critics point out it neglects the distribution of wealth within society, life expectancy, and educational attainment – factors which influence the average resident’s quality of life.