The Herfindahl-Hirschman Index (HHI) is a measure of an industry’s concentration and is used to weigh the market power of the leading companies in an industry. It equals the sum of the squares of the market shares of every company in an industry.

For example, assume there are 10 coffee shops in your neighborhood. The table below provides the names and market shares of all 10 shops. The CR4 equals 59 percent (the sum of the largest four) and the CR8 is 89.25 percent (the total of the largest eight). 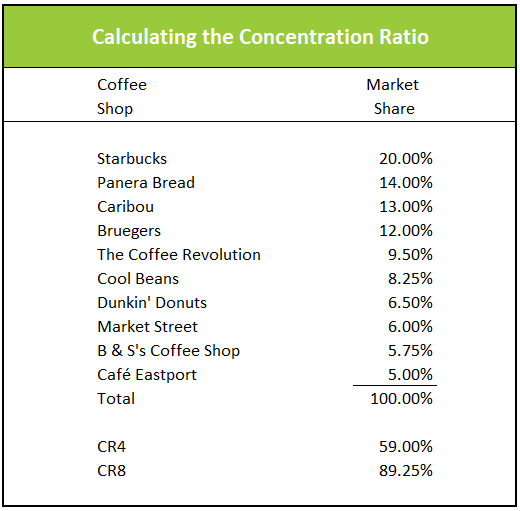 Economists prefer the Herfindahl-Hirschman Index (HHI) because, unlike the concentration ratio, it includes every company in an industry and gives proportionally more weight to the companies with the greatest market shares. (Sometimes the HHI is provided for only 50 companies because of the challenge of obtaining data for all the companies in an industry and the smallest companies have very little effect on the total.) The HHI equals the sum of the squares of the market share of every company in an industry. In other words, square each company’s market share and total these numbers to derive the industry’s HHI. The table below illustrates the calculation of the HHI for the coffee shop industry in your neighborhood. 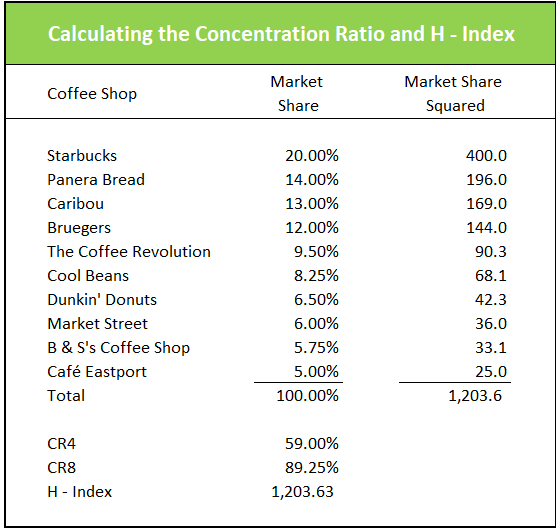 A concentration ratio can be a bit misleading. Two industries can have the same concentration ratio but different levels of market dominance. The table below demonstrates this possibility. Assume Industry ABC and Industry XYZ contain 15 companies. The market share of each company is listed in the table. Both industries have a C4 of 73 percent, but their HHI's differ. Industry ABC’s HHI equals 1,560 and Industry XYZ’s HHI equals 3,508 primarily because of the market dominance of Company A in Industry XYZ. 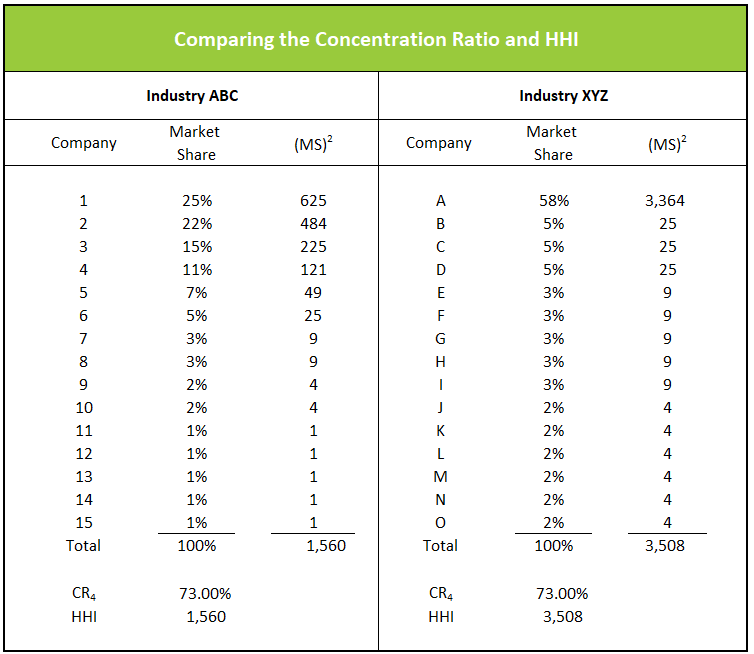 In the United States, the Federal Trade Commission and Justice Department rely on the HHI when evaluating a company’s proposal to merge with or acquire another company. Regulators analyze the index before and after the proposed acquisition or merger to see what its effect would be on market dominance. If the acquisition or merger would increase the HHI by less than 100 points it is likely the proposal will be approved. However, if the HHI increases more than 200 points, regulators may be concerned that the resulting market dominance would be too great. For example, if Company 1 in Industry ABC acquired Company 4 its market share would increase to 36 percent (assuming the entire share is absorbed by Company 1). The industry’s HHI would increase to 3,508. The regulators may forbid the merger because they are concerned Company 1 would gain too much market power.