Definition of the Income Effect:

The income effect describes how a price change of a good or service affects the demand for other goods and services because the price change impacts a consumer’s available income.

Grocery stores hope there is a large income effect when they offer a sale on a given item. They expect customers to purchase other items with a higher profit margin in addition to the item on sale.

Normally, the income effect is small, but occasionally it can be enormous. Many economists believe the refinancing boom of 2002 to 2004 prevented the US economy from entering a recession. It was common for homeowners to refinance their mortgages and save several hundred dollars each month. These savings increased available income and enabled consumers to purchase more goods and services than before lowering their mortgage payments.

Usually, consumers will purchase more of a good or service following an increase in their income. If so, economists refer to these goods and services as “normal.” However, sometimes higher incomes will reduce the demand for a good or service. These goods and services are called “inferior.” Clothing sold at a thrift store is an example of an inferior good.

Amy’s two favorite forms of entertainment are attending ball games and eating out. She has budgeted a fixed amount of her income for these pleasures. An indifference curve is a graph that shows all the combinations of two goods (or services) that yield the same utility. In other words, Amy would receive the same satisfaction (utility) from attending three games and eating out seven times (Point X) as she would from going to eight games and eating out four times (Point Y), or for that matter, she would be indifferent to purchasing any combination that is on I1 because Amy’s satisfaction would be the same. 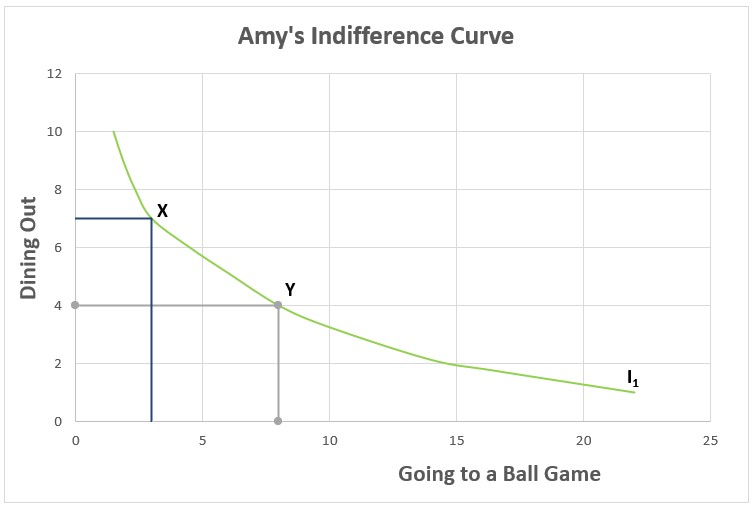 BL1 is Amy’s budget constraint on the graph below. Amy would spend all of her money at any point on her budget constraint. The line intersects the vertical axis where Amy spends her entire budget going out to eat. In this case, she would dine out ten times. It intersects the horizontal axis at ten games, in which case Amy’s entire budget is spent on attending ball games. 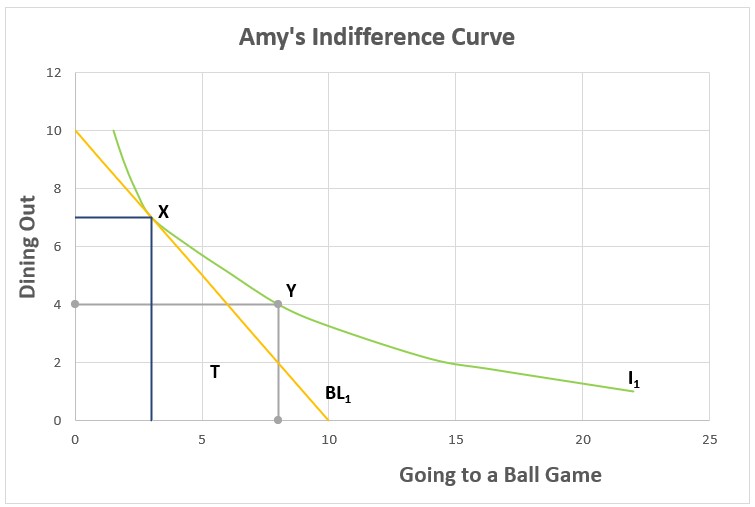 Amy’s income is not large enough to purchase any combination above the budget line, such as eight games and four visits to restaurants (Point Y). She would not choose a point below the budget line because she could increase her utility by purchasing additional items. For example, Amy would not choose T (five games and two visits to restaurants) because she could increase both the times she ate out and the number of ball games she attended while remaining within her budget. Amy would maximize her satisfaction by choosing Point X, the point on her budget constraint tangent to her highest possible indifference curve. She attends three games and dines out seven times. (Note that any point other than X that is on her indifference curve, such as Y, is impossible because it lies above the budget constraint.) However, Amy’s greatest satisfaction would change if the price of either dining out or going to a ball game changed.

Suppose the ticket price of a game is cut in half, but the price of dining out remains the same. How would this alter Amy’s spending behavior? She would likely attend more games, but she may also dine out more because her available income has increased. Her decision will depend on the relative prices and whether the services she purchases are normal or inferior. 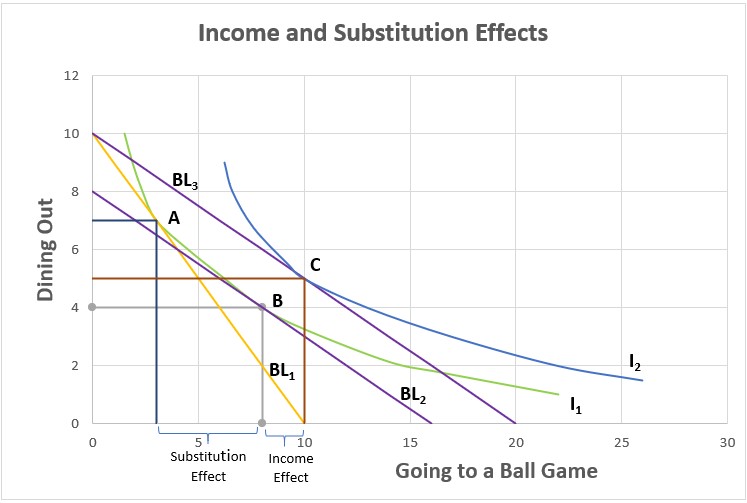 At half the price, Amy could purchase twice as many tickets to ball games and remain within her budget, so her budget constraint line would intersect the x-axis at twenty games. However, the y-intercept remains ten because the number of times she dines out would remain at ten if she chose to spend all her money dining out. Therefore, her new budget constraint line, BL3, would rotate counterclockwise. Assume her new indifference curve is I2. Her greatest satisfaction occurs where the new budget line is tangent to her new indifferent curve. Amy would now choose to eat out five nights and attend ten games, Point C. How much of the increase in games is caused by the substitution effect, and how much is due to the income effect?