Inflation is an increase in an economy’s general price level over a period of time. Inflation reduces the value of money.

Ask an American senior citizen how much a dollar could buy in 1950, and you’ll probably be surprised. A person could dine out and attend a movie for under $1.00! Even in the early 1960s, the cost of a McDonald’s® hamburger and a movie was under $1.00. Today, the cost is closer to $14.00. A dollar cannot buy what it could in the past because of inflation. In other words, your money is worth less today than it was several years ago because of inflation.  Listen in as a family discusses prices on their way to a Chicago Cubs ® game.

Inflation and the Cost of a Cubs Game

The most common measures of inflation are the consumer price index (CPI) and the producer price index (PPI). The consumer price index measures the change in the cost of a typical market basket purchased by an urban family, assuming the same items are purchased every month. Inflation occurs when the basket of goods costs more. The rate of inflation equals the percentage increase in the basket’s cost. Deflation occurs when the items in the basket cost less. It is important to note that some of the items may increase or decrease more than the general rate of inflation. For example, assume that the basket costs $100 in year 1. In year 2 the same basket costs $101. The inflation rate would equal one percent. Gasoline prices may have decreased two percent, while a box of cereal may have increased five percent. An inflation rate of one percent means that the weighted average price increase is one percent. The goods contained in the basket are weighted by the average amount a family uses the good or service.

The Bureau of Labor Statistics is responsible for providing inflation figures monthly. (BLS)

In the long run, inflation is caused by increasing the money supply. When the money supply is increased, more money is used to pay for the same number of goods and services, so the money is less valuable relative to those goods and services. When desperate, governments have printed money to finance wars or debt. In some cases this caused hyperinflation. Hyperinflation results when the devaluation of money is so rapid that people find that the goods they own hold their value better than the currency, so they barter, or trade for goods and services. They also spend their paychecks as soon as they receive them to avoid “losing” their money through sharp price increases. Fortunately, hyperinflation is a rare occurrence.

More common is demand-pull inflation which occurs in an expanding economy when the aggregate demand pulls the price level higher. During these periods more people are employed for longer hours, income rises, and an overall level of optimism is prevalent. People and businesses spend more, which in turn increases the aggregate demand. This is illustrated in Graph 1. Note that initially the price level is P1, and the economy’s output equals Q1. The increase in the economy’s aggregate demand shifts from AD1 to AD2. The price level increases to P2. The good news is there is also an increase in the real gross domestic product to Q2. 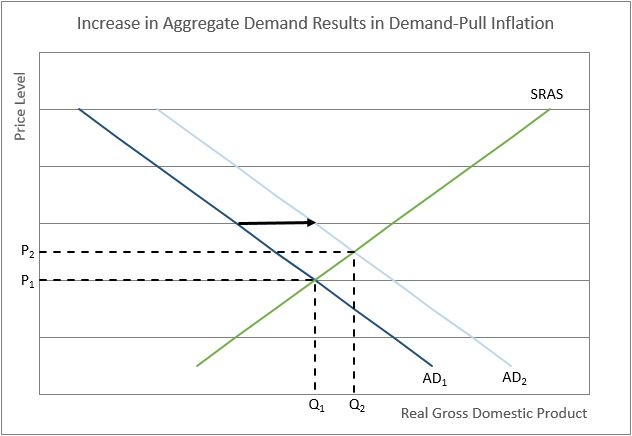 Cost-push inflation occurs following a sudden increase in the cost of production for most goods and services. For example, when energy prices suddenly increased during the Arab Oil Embargo, the cost to provide virtually every good and service increased. Almost every business experienced a leftward shift in its supply curve. Businesses raised their prices to recoup some of the escalating costs. They also cut output.

During a period of cost-push inflation, the economy’s aggregate supply curve shifts to the left, as seen in Graph 2. In this case, prices jump from P1 to P2 but note that the output decreases from Q1 to Q2. Cost-push inflation causes greater hardship than demand-pull inflation because unemployment and the price level increase. 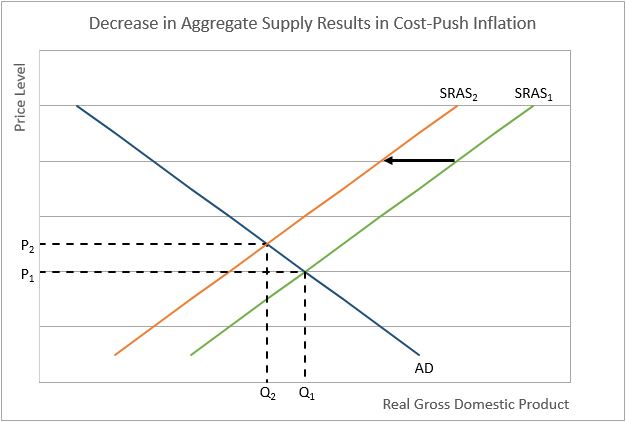 Who Benefits and Who is Hurt By Inflation

It is a common misconception that inflation hurts everyone. Inflation causes the redistribution of income. Individuals whose income fails to keep up with inflation are hurt. They redistribute their income to those whose incomes exceed the rate of inflation.

Hannah was thrilled when she received $100 for Christmas in 2000. She opened a savings account earning one percent interest per year. After one year the balance of the savings account was $101 ($100 deposit plus $1 interest). In 2001, Hannah was disappointed when she learned her $101 would only purchase $98 of goods and services. This is because there was three percent inflation. Savers suffer when the interest rate paid on savings is less than the inflation rate.

Inflation hurts individuals who are on a fixed income because their incomes rise less than the inflation rate. Senior citizens frequently have fixed incomes, such as monthly pension payments. Like Hannah, the interest they earn on their savings may be less than inflation. Social Security payments in the United States were fixed until 1975 when Congress voted to provide social security recipients annual increases tied to inflation. Many long-term employment contracts have a cost of living allowance (COLA) to protect the beneficiaries against inflation. The payments automatically adjust with a change in the consumer price index. Tax tables are now adjusted for inflation.

Inflation also hurts lenders. Todd purchased a home in 2003. He secured a 30-year fixed-rate mortgage to finance his purchase. His monthly payments of $800 have been the same since purchasing his home. After adjusting for inflation Todd learns that his $800 payment in 2013 is equivalent to $632 in 2003. Todd has benefited from inflation because his mortgage payment has decreased relative to inflation. The bank is paid back in dollars that are less valuable than when Todd took out the loan. This illustrates why borrowers like Todd and the United States government benefit from inflation and why lenders are hurt by it.

Some professions benefit from inflation when the price of the product or service they offer increases at a rate exceeding the general level of inflation. For example, historically home prices increase more than the general inflation rate in many areas of the country. Real estate agents benefit from the increasing prices because they are paid a percentage of the sales price as commission. When a home’s value increases more than inflation, the real estate agent’s compensation will also rise more than inflation unless the commission percent has been reduced.