An interest rate is the rate charged or earned from borrowing or lending an asset (usually money) to another party.

There are thousands of interest rates, but economists frequently speak as if there is one “market” rate because most interest rates usually move in the same direction. Some rates, such as bonds, change many times during a day. Banks charge different rates on their certificates of deposit. The table below lists some of the more common interest-paying assets and their rates on August 22, 2016. 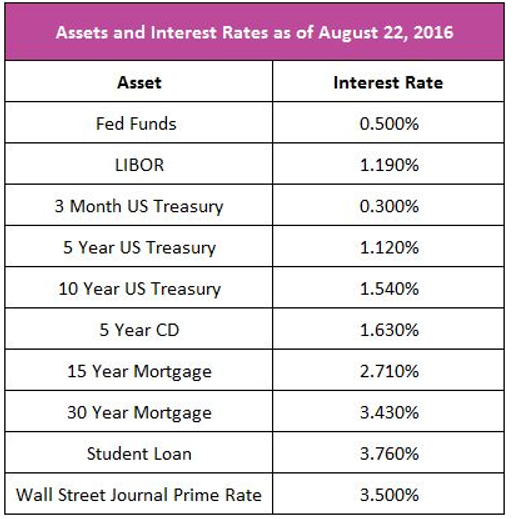 Even risk free interest-bearing assets such as government bonds have several risks.

Inflation hurts lenders because it reduces the value of a payment over time. For example, assume Todd purchased a home in 2003. He secured a 30-year fixed-rate mortgage to finance his purchase. His monthly payments of $800 have been the same since purchasing his home. Using the Bureau of Labor Statistics calculator, an $800 payment in 2013 is equivalent to $632 in 2003. Todd has benefited from inflation because his mortgage payment has decreased relative to inflation. In other words, the bank is paid back in dollars that are less valuable than when Todd took out the loan. This illustrates how borrowers like Todd and the United States government benefit from inflation and why lenders are hurt by it.

Risk of a Change in the Value of the Asset:

A financial asset’s value is inversely related to the market interest rate. When purchasing a bond, the investor is purchasing a stream of payments which is determined by the bond’s coupon rate. For example, assume Christina owns a $10,000 government bond with a four percent coupon. She has purchased a stream of $200 semi-annual payments. (Government bonds normally pay interest semi-annually.) A rise or fall in the market rate does not change the $400 annual income. However, the price of the bond adjusts to any change in the market interest rate. This means that if the market rate decreases, investors are willing to pay more for a given annual payment. For example, assume the market rate drops to three percent shortly after Christina purchased her bond. A newly issued $10,000 bond would now pay $300 annually. Investors would be willing to pay Christina more than $10,000 for her bond because the generated income exceeds $300. The opposite is true. Bond values decrease following an increase in the market rate of interest.

The risk of default is usually minimal for government debt. However it is the primary concern of other investors / lenders. Banks assess the risk of default when approving a loan application. Credit scores are used to measure an individual's credit worthiness. People with low credit scores pay a higher interest rate than borrowers with high scores. Why? Because investors (lenders) perceive the borrower with the lower credit score as a higher risk. They believe past payment history is indicative of the borrower’s willingness to pay.

Credit agencies, such as Standard and Poor’s and Moody’s, measure the probability of default on large issues of debt. Low-risk companies and governments pay a much lower rate to borrow than do high-risk entities. For example, on August 25, 2016, the United States had an AA+ credit rating from Standard and Poor's. Greece had a CCC+ rating following the default on its debt in July. The US paid 1.16 percent to borrow money for five years, whereas the Greek government paid 8.138 percent. The higher rate reflected investor concern that Greece would default on more of its payments.

Here is a fun video explaining the relationship between interest rates and bond prices in more detail: