Keynesian economics is a school of economic theory named after the British economist John Maynard Keynes. Keynesians advocate using fiscal and monetary policies to micromanage the economy by manipulating aggregate demand to control inflation and avoid the severest of recessions.

Keynesian economics revolutionized economic theory. Prior to the work of John Maynard Keynes most economists believed in laissez-faire economics, or a hands-off government economic policy. The classic view is that the “invisible hand”, first introduced by Adam Smith, guides the economy. Business cycles are inevitable, but eventually they self-correct through the adjustment of wages and prices. Classical economists have a long-run perspective.

Classical economic theory can best be viewed with a graph. Classical economists believe that everything adjusts with price. Economic output is solely determined by the factors of production or resources available. The aggregate output (aggregate supply) does not increase following an increase in prices, or decrease following a fall in the price level. The aggregate supply curve is vertical as shown on the graph below. This means that any change in the economy’s aggregate demand must result in a change in the price level to reach economic equilibrium.

For example, assume the initial aggregate supply and aggregate demand curves are AS and AD1, respectively. The equilibrium price level is PL1. Assume that some event, such as a drastic fall in prices on the stock market, or a terrorist attack, causes a sudden fall in the aggregate demand curve to AD2. The price level has decreased to PL2, but production remains unchanged. There would still be full-employment, but workers would accept a lower wage. Workers would not be hurt by the lower wage because companies would have also lowered their prices. Furthermore, the manufacturers would benefit from the lower prices for raw materials. In other words, the price of all goods, services, and factors of production would adjust to the lower price level. 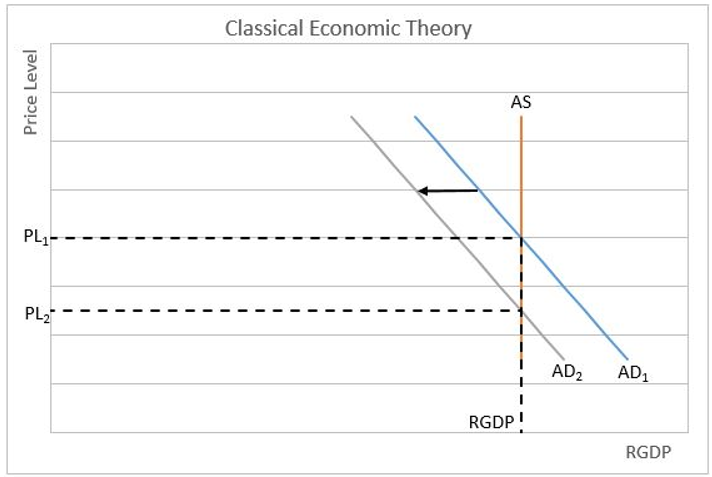 John Maynard Keynes lived from 1883 to 1946 and witnessed the hyperinflation of Germany following WWI and the Great Depression in the early 1930's. He believed that the government should manage the economy through fiscal and monetary policy to avoid wild fluctuations in the business cycle. The severity of the Depression caused Keynes to question the wisdom of classic theory. He believed a reduction in prices would not necessarily result in an increase in employment. In fact, businesses suffering through the recession would defer investing in capital. Recessions were caused by an inadequate aggregate demand.

Keynesians recognize that prices do not automatically respond to a reduction in an economy’s aggregate demand. Producers cut production and lay off employees because labor is slow to respond to wage changes. Wages are “sticky”. Suppliers do not immediately adjust their prices, so supplier prices are also “sticky”. Sticky wages and prices result in an upward sloping aggregate supply curve, as shown on the graph below. 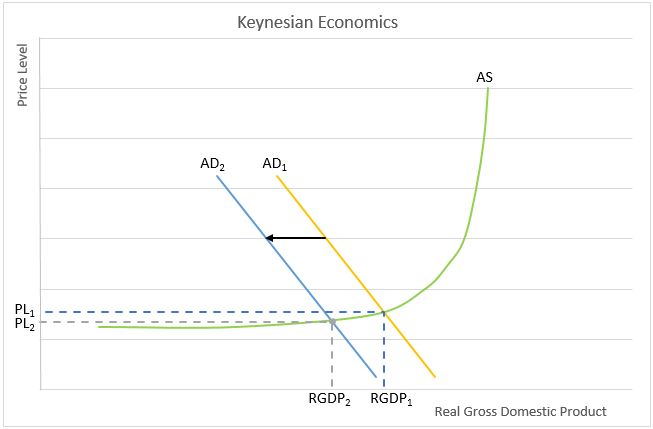 Compare the graphs of classical economists and Keynesian economists. Initially the economy has the same price level and output.  Assume the drops in the economy’s aggregate demand are identical.  However, because the Keynesians believe AS curve slopes upward, Keynesians would predict a decrease in production in addition to a decrease in the price level. At PL1 there is a surplus -- more is produced than demanded. Companies respond by cutting production from RGDP1 to RGDP2 and reducing their prices. The drop in the price level is less than the classic economists would predict because of sticky wages and prices.

Keynes witnessed the depression. He believed that ultimately the economy would emerge from the depression, but that the government could kick-start the economy. His famous quote, “In the long-run we are all dead”, reflects his impatience with the natural progression of a business cycle. He argued that fiscal and monetary policies could be used to stabilize the business cycle. During recessions, he argued, fiscal policy should include increasing government spending and cutting taxes. The objective of monetary policy should be to lower interest rates which stimulates consumer spending and business investment. He was also an advocate of decreasing government spending and increasing taxes when the economy was overheated. Keynesians focus on the demand side in the short-run at the expense of the long-run.

What made Keynesian economics revolutionary was that he was a proponent of government intervention. When there was a problem, the government provided the answer rather than the markets. Critics point to how his theory has resulted in a widespread belief that government, rather than the free market, should resolve our problems. Government decisions should be made by intellectuals rather than the consensus in the market place. People in power are slow to increase taxes or decrease spending during boom times – which ultimately results in a mounting national debt. Furthermore, these decision makers are slow to recognize that every decision has a cost. A tax increase deprives taxpayers from buying some items. Government purchases allocate capital where it may not be the most efficient. In fact, it may crowd out private investment by pushing up interest rates.