Definition of a License:

A license is a permit issued by an authority to practice a particular trade.

Business licenses restrict the number of producers either by limiting the number who can enter an industry or by increasing the cost of entering the industry. They are generally imposed with the objective of protecting the public by making sure an individual is principled and qualified (such as a doctor).

In some regards, licenses are similar to other forms of trade restriction. However, licenses are normally implemented to restrict domestic, rather than international, trade. Doctors, lawyers, building contractors, real estate brokers, insurance agents, taxi drivers, and many more professionals require a special license to operate. Licenses are normally imposed to protect the public. After all, we want assurance that the medical personnel serving us are qualified!  But licenses have a cost, such as educational requirements or license fees. Most professionals must pay for their licenses.  In some cases, governments use licenses to limit the suppliers of a service, much like a quota. By limiting supply and increasing expenses, licenses raise the price of a good or service. Consumers typically pay for at least a portion of this added expense.

Supply and demand analysis illustrates the economic consequences if a license is required to operate a taxi service in a large metropolitan city. On the graph below SupplyWithout License is the city's supply curve without government intervention. Anyone could purchase a car and become a taxi driver. The market price per ride (assuming all rides are identical) is $6, and one million rides would be sold per month. Now, assume the municipal government limits the number of drivers by issuing a set number of licenses, dropping the capacity to 600,000 rides per month. SupplyWith License is the supply curve when licenses restrict the monthly ride capacity to 600,000. The kink at 600,000 in the SupplyWith License curve occurs at the ride capacity for the maximum number of taxis permitted by the city government. (This supply curve is red.) No additional taxis could be supplied at any price because the government offers only a limited number of licenses for taxi drivers. As a result, ride capacity drops. The new equilibrium price rises to $10 per ride.

Consumers pay a higher price per ride and must wait longer for their ride. The clear winners in this scenario are the taxi owners. Some may even sell their rights to another driver rather than drive themselves. Municipalities also win because they receive revenue from issuing licenses. The greater winner depends on the license fee. If the government charged a high enough licensing fee it could tax away all of the benefits derived from the taxi drivers charging the higher fare. When viewing this graph it is clear why Uber has become so popular with riders and entrepreneurs. Uber is a taxi service where individuals may become drivers. Uber increases the municipality's capacity by shifting the supply curve closer to SupplyWithout License. 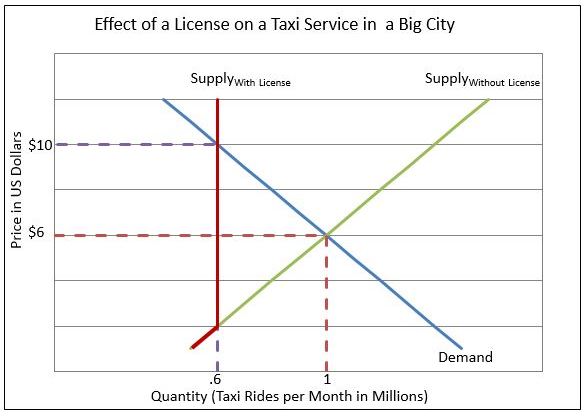 Licensing agreements may exist between two parties for the use of real, personal, or business properties. For example, Higher Rock Education and Learning, Inc. entered a licensing agreement to use a software template for its website.