During recessions, a central bank’s standard monetary policy is to increase an economy’s aggregate demand by reducing benchmark interest rates such as the federal funds rate and LIBOR. When those rates fall, others follow. Home loans become less expensive and easier to secure. More cars are sold when rates are low. Lower borrowing rates may prompt businesses to take on new projects. For example, assume a company wants to expand its operations. It estimates its return on investment would equal six percent. The expansion does not make business sense when the borrowing rate exceeds six percent, but it becomes economically worthwhile at rates less than six percent. Lower rates normally stimulate economic growth by making more projects viable and large financed consumer purchases more affordable. But what happens when the federal funds rate or LIBOR is near or below zero? Traditional monetary tools become ineffective because there is little or no room for the central bank to lower rates further. Economists refer to this dilemma as a liquidity trap.

The graph below illustrates why monetary policy’s effectiveness is reduced when interest rates are very low. Assume the economy is in a recession. The central bank chooses to use expansionary monetary policy and increase the money supply from MS1 to MS2. The demand curve for cash, DM, slopes downward because savers and investors are enticed to invest more of their cash at higher rates. At lower rates, investors choose to hold more cash rather than tying up their money in low-interest CDs or bonds. A point is reached (usually close to zero) when the demand for money DM is perfectly elastic, so the increase in the money supply has no effect on the interest rate. At this point, monetary policy becomes ineffective because reducing interest rates fails to increase the number of loans demanded. Instead, households and businesses would choose to hold cash. 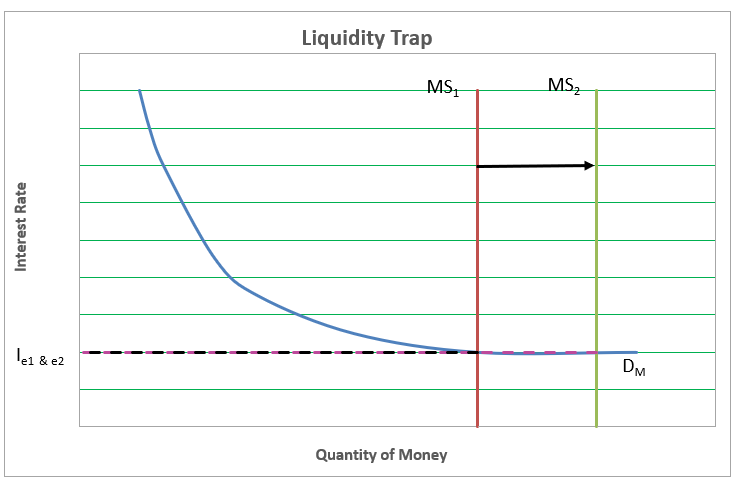 What would deter companies and households from taking advantage of the low rates? A lack of confidence. Managers proceed with projects when they are confident there will be sufficient demand for the goods and services they produce. Households may choose to save more if they fear losing a job or a drop in wages. Another reason may be that expansion is unnecessary if a company already has plenty of excess capacity. In addition, banks may be concerned that a weaker economy will increase defaults, so they approve fewer loans. Deflation will also hinder monetary policy. Why make a large investment today, when the same investment will cost less tomorrow?

Economists differ on the best means of digging out of a liquidity trap. Some favor fiscal policy (government spending and reducing taxes) because of the ineffectiveness of monetary policy. Others believe monetary policy can still be used to lower rates other than the bench-mark rates. This is the strategy behind quantitative easing, where the central bank purchases interest-sensitive assets such as mortgage-backed securities, bonds (corporate and government), and commercial paper. The increase in demand lowers the rates of these financial assets. For example, purchasing mortgage-backed securities lowers mortgage rates, which stimulates home-buying. On June 16, 2016, the Federal Reserve owned over $1.7 trillion in mortgage-backed securities (MBS), when as recently as December 2008, the Federal Reserve did not own any MBS.