Loose money refers to the monetary policy of expanding the money supply to promote economic growth by making loans more readily available. It is also referred to as accommodative or expansionary monetary policy.

The availability of credit fuels the economy. There are periods in business cycles when loans are relatively easy to obtain, and money is said to be “loose”. At other times money is “tight” because lender guidelines are more stringent. A central bank may use loose or accommodative policies to increase the economy’s aggregate demand.

Following the 2008 financial crisis, loans became much more difficult to obtain. Underwriting became more stringent for everything from mortgage loans to credit cards. Money was tight. Consumer spending and investment spending slowed, decreasing the economy’s aggregate demand (AD). Business slowed. Factories had excess capacity. The graph below shows the aggregate demand and short-run aggregate supply (SRAS) in this phase of the business cycle. Before the recession, the economy operated at its long-run equilibrium (where the AD, SRAS, and long-run aggregate supply (LRAS) intersect) at Point A. PLA and QA were the equilibrium price level and production.

The financial crisis triggered a drop in the AD from AD1 to AD2. Shortly after, companies saw the demand for their goods and services decrease. In response, companies cut prices hoping to increase the quantity demanded for the goods or services they offered. A short-term equilibrium was reached at Point B, where the price level was PLB and production fell to QB. At this point, the economy was in a recession because output was decreasing. Many workers lost their jobs. Others accepted lower wages, underemployment, or a part-time job. Less money was available for consumer spending. Aggregate demand dropped even more. Again, businesses cut employment. The cycle continued. 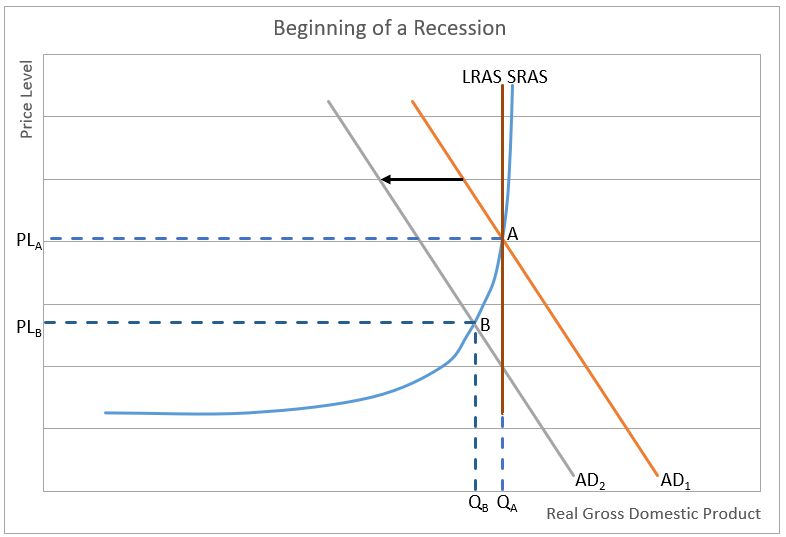 What can reverse the continuing drop in consumer spending and business investment during recessions? Lower interest rates will help, by making items such as cars, homes, and business investments more affordable. Central banks usually respond with loose monetary policy by increasing the money supply and lowering interest rates to ultimately spur economic growth. In the United States, the Fed may loosen credit by decreasing the discount rate (the rate the Federal Reserve Banks charge banks that go to the Fed’s window to beef up their required reserves), decreasing the banking system’s reserve requirement (which increases the money available for lending), and decreasing the federal funds rate through Federal Open Market Operations. Each strategy increases the reserves available for banks to lend. Banks lower their rates to entice businesses and households to borrow from them. Businesses expand. Consumers purchase more homes and cars. The economy expands, but at a cost – the price level increases.

On the graph below, a loose monetary policy results in the economy returning to its long-run equilibrium of QA and PLA when the aggregate demand returns to AD3, which is the same as AD1. 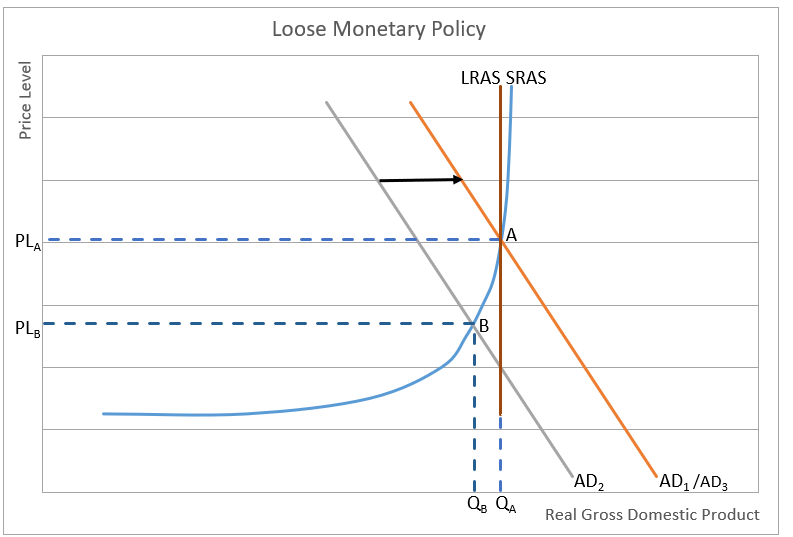