Monopolistic competition is a market structure in which many companies compete by offering a slightly different product.

Monopolistically competitive industries share some of the characteristics of perfectly competitive and monopolistic industries. Would you consider the fast food industry to be perfectly competitive or a monopoly? Neither. Wendy’s, McDonald’s, Burger King, Pizza Hut, Taco Bell, A & W, Chick-Fil-A, and many other fast-food restaurants compete for your business. Clearly, none of these companies have a monopoly in the fast-food industry. But the fast-food industry is not perfectly competitive because all these companies offer similar but not a standardized product. Even those chains that sell hamburgers differ slightly. For example, Burger King emphasizes its flexibility when they market “Have it your way.” McDonald’s tries to appeal to children with Ronald McDonald, playgrounds, and Happy Meals. Each company is aware of what its competitors charge.

Like perfectly competitive industries, there are many companies in a monopolistically competitive industry. No single company can influence the market price by cutting output. No single company has price leadership. There are too many companies to be able to successfully collude, or reach any type of agreement that would limit competition such as setting a price or agreeing on only serving one region.

Assume you are visiting a food court in a shopping mall. You have an urge for pizza. A local vendor sells slices of pizza, but it charges twice as much as the restaurants selling chicken sandwiches, tacos, and hamburgers. Would you still buy the slice of pizza? Probably not, but even if your answer is, “Yes”, the line to purchase pizza is probably shorter because other consumers would substitute a chicken sandwich, taco, or hamburger for the pizza. Those craving pizza are willing to pay the higher price. This scenario illustrates that these companies have some pricing power. Unlike a monopoly, they are keenly aware of their competitors’ pricing. However, unlike a company in a perfectly competitive industry, they are not price takers. These companies have demand curves that slope downward. They do not have to worry about losing all of their sales if they raise their prices like a company in a perfectly competitive industry – but they will lose some sales because consumers will substitute a similar product at a more attractive price. 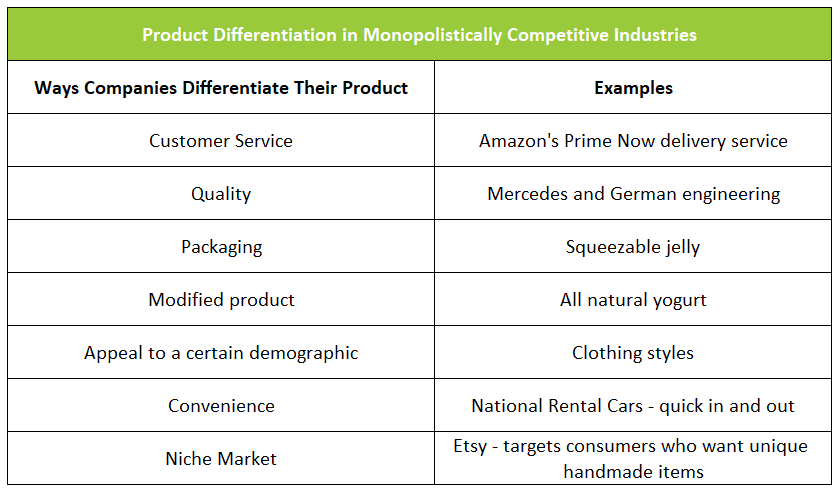 The graph below illustrates the quantity of tacos Maria’s Taco, a local taco vendor, will sell daily and how Maria’s will price her tacos. The company’s demand curve is less steep than the monopoly’s curve, but not flat like a perfectly competitive company. The demand curve is flatter because monopolistically competitive industries have many competitors and close substitutes which makes pricing more competitive. However, after building brand loyalty these companies may be able to increase their price above what it would be in a perfectly competitive market. Companies still produce where marginal revenue equals marginal cost, but the difference is less severe because the demand curve is flatter, as shown in the graph for Maria’s Taco where PMC is slightly higher than P. 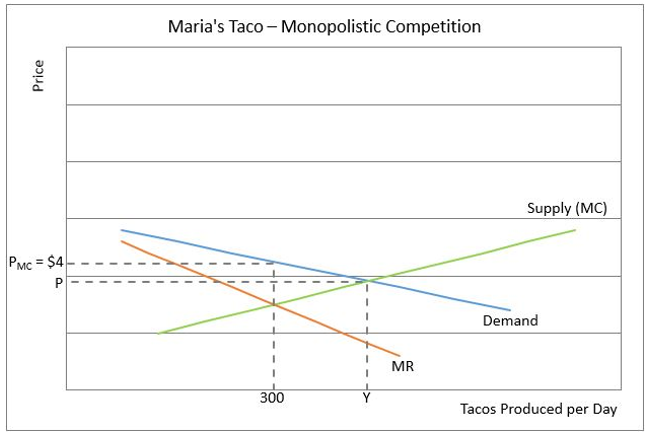 In an ideal world, the price would be P, and the quantity produced would be Y. However, Maria has some market power because she has differentiated her product. She can charge a slightly higher price and reduce the number of tacos she produces each day. Maria’s Taco will strive to sell 300 tacos per day, where the marginal cost and marginal revenue curves intersect. Maria could price her tacos at $4.00 if she limited sales to 300 tacos per day. The $4.00 price is determined by the demand curve at 300 tacos.

Monopolistically competitive industries have few barriers to entry. Successful companies attract new entrants into an industry. The new competition offers substitutes and decreases the demand for the existing company’s products, forcing a reduction in prices. Declining sales and prices lower profits. Some companies may exit the industry because they are no longer profitable. 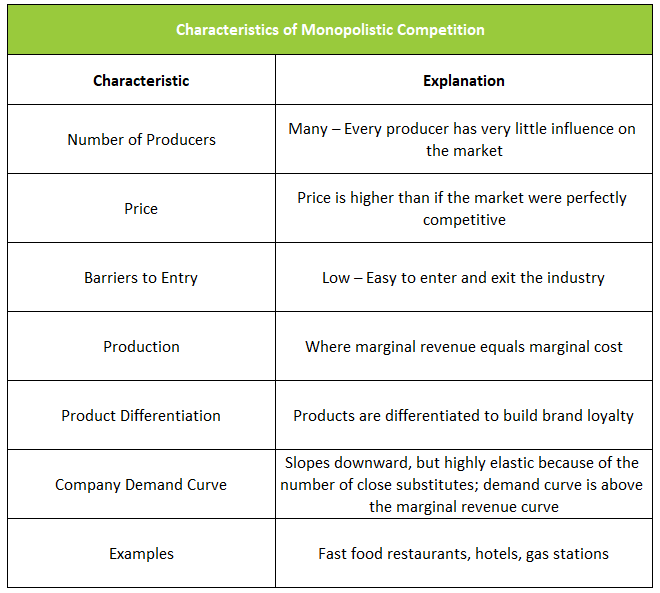