A monopoly is a market structure with a single seller offering a unique product.

Try to imagine life without electricity. Now imagine there is only one provider of electricity in your community. Would you be willing to pay more than you are already paying? Probably. Electrical utilities could substantially increase their price before people would stop purchasing from them. A monopoly exists when one company serves a market for a specific good or service. The absence of competition creates pricing power for monopolies. Governments regulate most monopolies to limit their pricing power, but monopolies are still subject to the law of demand. Families will make greater efforts to conserve when prices are higher. They might adjust their thermostats or switch from using electricity to natural gas to heat their home. The availability of substitutes reduces a monopoly’s power. Characteristics of monopolies include:

Monopolies exist because entry into an industry is blocked economically or legally. An economic barrier exists when one company can furnish a good or service more efficiently than several companies because the industry has economies of scale. A company has an economy of scale when increasing production reduces the average total cost to produce a unit because the high fixed costs are averaged over a greater number of units.

Companies with patents have another type of monopoly. Patents are government-granted monopolies because patents make it illegal for a company other than the patent-holder to produce the same good for ten years. Why would the government issue a patent? Pharmaceutical companies spend millions of dollars developing new drugs. Once developed, the drugs could easily be replicated by competitors. Without patent protection, companies would wait for another company to produce a drug and then copy it rather than investing in developing new drugs themselves. Fewer drugs would be developed if another company could legally copy and sell a drug shortly after it is introduced.

A company with a monopoly has a demand curve that is identical to the industry demand curve because it is the only producer. This means a monopoly can control its price by controlling its output. A company operating in a perfectly competitive industry is a price taker, so if it raises its price, sales will drop to zero (assuming the new price exceeds the market equilibrium) because many other companies are willing to offer the product at the market price. However, the monopolist can raise its price if it is willing to accept the resulting drop in the number of units sold.

So, what prevents a monopoly from continuing to raise its price? One reason is if it is a natural monopoly its average costs will continue to decrease as production is increased. Like all businesses, the optimal production level is where the monopoly’s marginal revenue equals its marginal cost.

The graph illustrates monopoly power and the cost to society. Note the marginal revenue curve (MR) lies below the demand curve (D). The marginal cost curve (MC) is added. Like all businesses, profits are maximized at the production level where the marginal revenue equals the marginal cost, or X and QM. A demand curve shows the quantity consumers purchase at different prices, so if QM is produced, monopolists would charge PM and sell QM for the good or service. QC would be produced, and PC would be charged in a more competitive environment. Society loses by paying a higher price for less than it wants. PM minus PC is the difference in price, while QC minus QM is the difference in quantity produced.

Normally the lure of economic profits encourages businesses to enter a market. As a result, production increases, and the price falls. Unfortunately, a monopoly has no competition since economic barriers prevent the entry of others into the industry, so higher prices and less production will usually persist. The social and economic costs of a monopoly may warrant government intervention. Regulations that forbid companies from creating a monopoly fall into two categories: price controls and anti-trust laws. Price controls attempt to set the price of a good or service closer to a free market price. (PC on our graph above.) Antitrust laws promote competition by prohibiting companies from colluding to increase monopoly power.

Technological innovations have diminished the power of many monopolies. For example, several years ago most communities granted one telephone company a monopoly. These local monopolies all but disappeared when cell phones became ubiquitous. Now several companies compete for your telephone service. Technological innovations have threatened the postal service. Email, FedEx, and UPS have all diminished the clout of the United States Postal Service’s monopoly. Satellite television is a substitute for cable television, thereby diminishing the monopoly power of cable companies.

The table below summarizes the common characteristics of a monopoly. 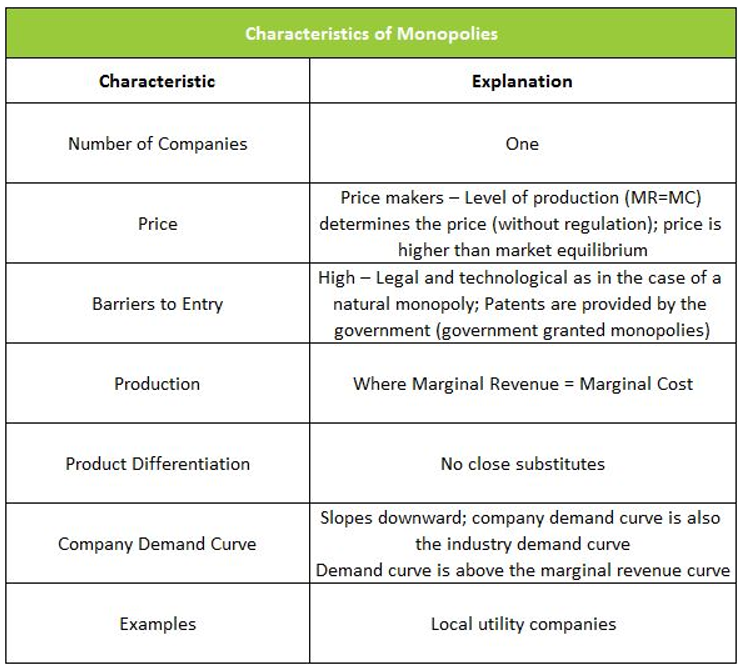 Watch our video to learn more about Monopoly: