National income is the income derived from a nation's productive resources for their contributions to its gross domestic product. It equals compensation to employees plus business profits plus taxes on production and imports less subsidies included in a business's income.

National income is one way to measure the size of an economy and can be used to calculate an economy’s total output. How can income equal output? Household expenditures must equal producer expenditures because a household expenditure is a producer’s income, and a producer’s expenditure is a household’s income. Families spend money to purchase goods and services, which provides businesses with a portion of their revenues. Companies then use this money to buy equipment, labor, land, raw materials, and entrepreneurial talent in the factor market. The revenue received by the business must equal the money paid for the factors of production, including the resulting profit. Economists use the circular flow model to illustrate this concept. Each income category included in national income is discussed below.

Compensation to Employees – The compensation of employees is the most significant component of national income, accounting for approximately 55 percent of GDP. This category includes wages paid to private and public employees for the domestic production of goods and services. Worker compensation also includes supplements such as the employer’s social security contribution, pensions, and contributions to healthcare.

Net Operating Surplus – Net operating surplus, or profits, is the second largest category of national income. It includes the net income from sole-proprietorships and partnerships where the earnings flow directly to the owners. National income also includes corporate profits before taxes and the distribution of dividends. Interest income for loans used to acquire capital is included, as is interest received from savings accounts and corporate bonds. However, economists exclude interest received from the government. Rent received for the use of real property is included in the net operating surplus.

Taxes on production and imports – National income includes taxes directly associated with the sale of a good or service because they are government income. Suppose you purchase an item for $100, and the state charges a 5 percent sales tax. You pay $105, of which $100 goes to the seller, and $5 goes to the government. A business usually does not include the collected sales tax in its revenue, so it must be accounted for when calculating national income. Like a sales tax, economists include excise taxes in national income. Producers pay an excise tax directly to the government even if they pass the tax burden to the consumer in the form of a higher price. However, economists exclude income taxes from this category because income taxes are included in compensation to employees and net operating surplus.

Subsidies and Tax Credits –  Subsidies are paid directly to businesses, and businesses report subsidies as income. But subsidies do not buy a specific good or service, so economists deduct subsidies when calculating national income. Examples of subsidies paid in many countries include assistance to farmers, tax credits for developing solar energy, tax credits for opening a manufacturing plant in a region, and payments to railroads to cover losses. 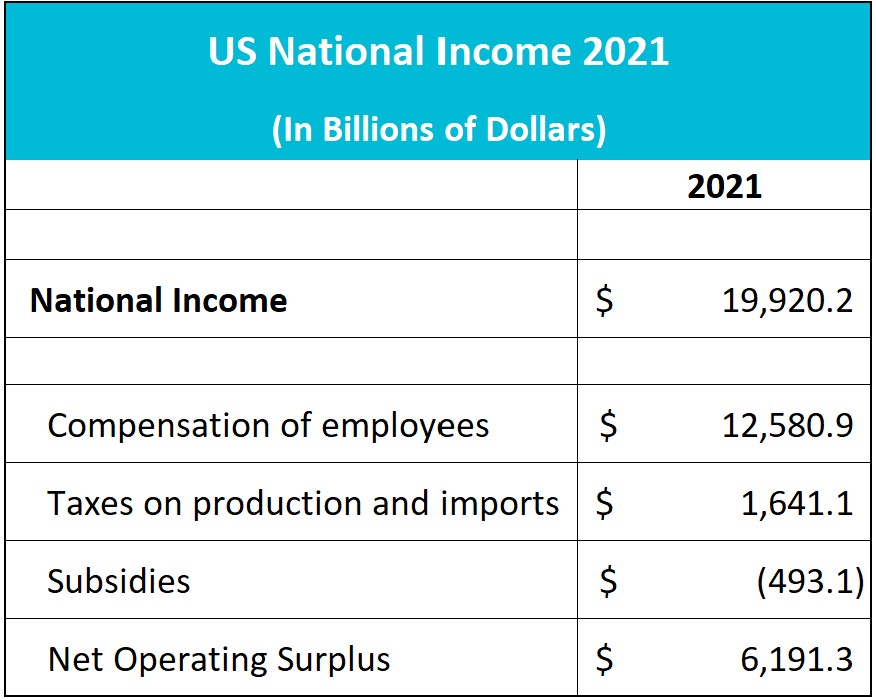 Exclusions from National Income – National income excludes any income not directly related to production. It also excludes transactions where the sale would be double-counted. Transfer payments, stock market transactions, subsidies, and private gifts are not included in national income because the payments are not directly associated with providing a good or service. For example, the government does not receive a good or service from a Social Security recipient. Likewise, trading stocks and bonds do not result in the production of a good or service. If an investor purchases a stock, the seller does not produce anything. National income includes new car purchases, but not second-hand purchases to avoid double-counting. The second-hand car was included in national income in the year it was initially produced. Economists also exclude intermediate goods to avoid double-counting since the sale of the final good contains the income generated by the sale of the intermediate good.

GDP equals the market value of all final goods and services produced within a country in a given period. Economists calculate GDP in two ways. The expenditure method adds the economy’s total expenditures and uses the formula:

Where C equals personal consumption expenditures, I is the gross private domestic investment, G equals government purchases of goods and services, and NX is net exports. Like national income, GDP only includes expenditures when the buyer purchases a final good or service. Therefore it does not include second-hand expenditures, investments in stocks and bonds, and transfer payments. The table below uses the expenditure approach to calculate the US GDP in 2021. 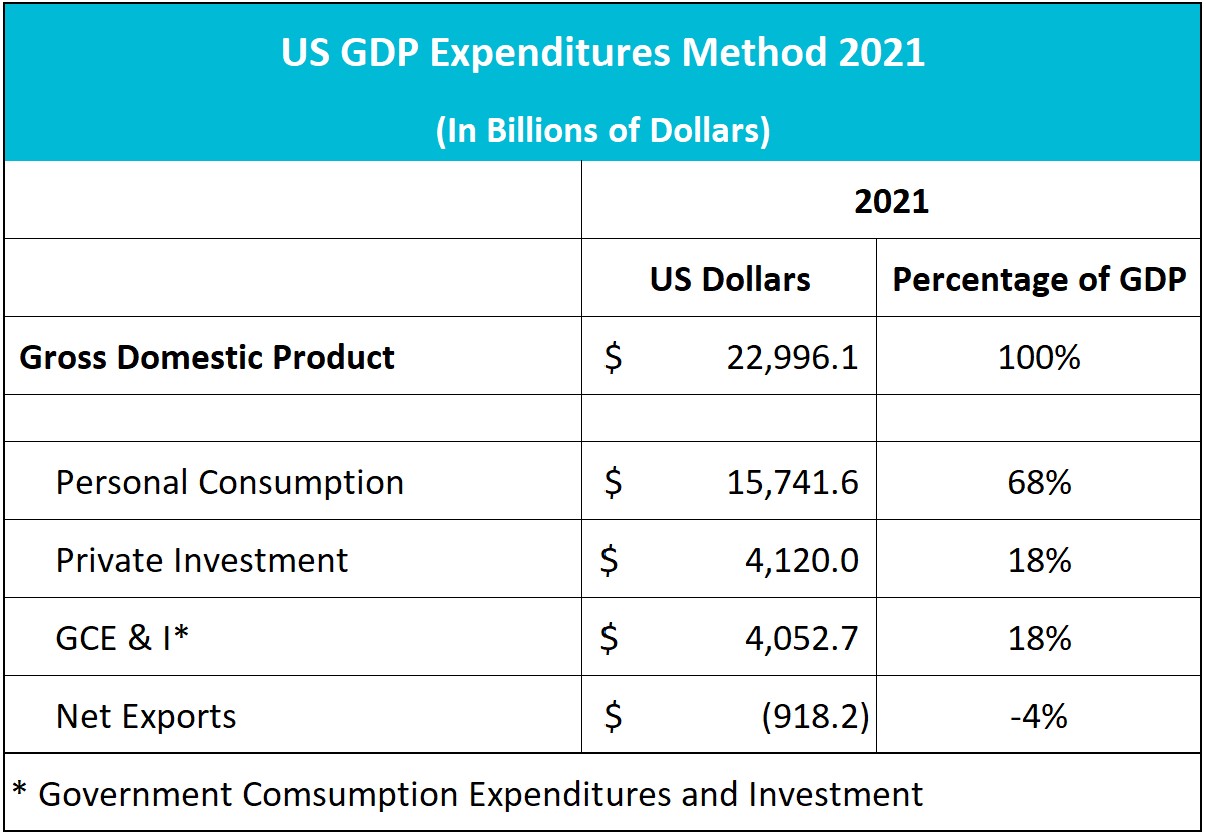 Because every transaction is income for the seller and expenditure for the buyer, national income should equal an economy’s output. But national income was only 87% of GDP in 2021. It does, but only after making several accounting adjustments.

The table below illustrates the income method to calculate GDP for the US in 2021. 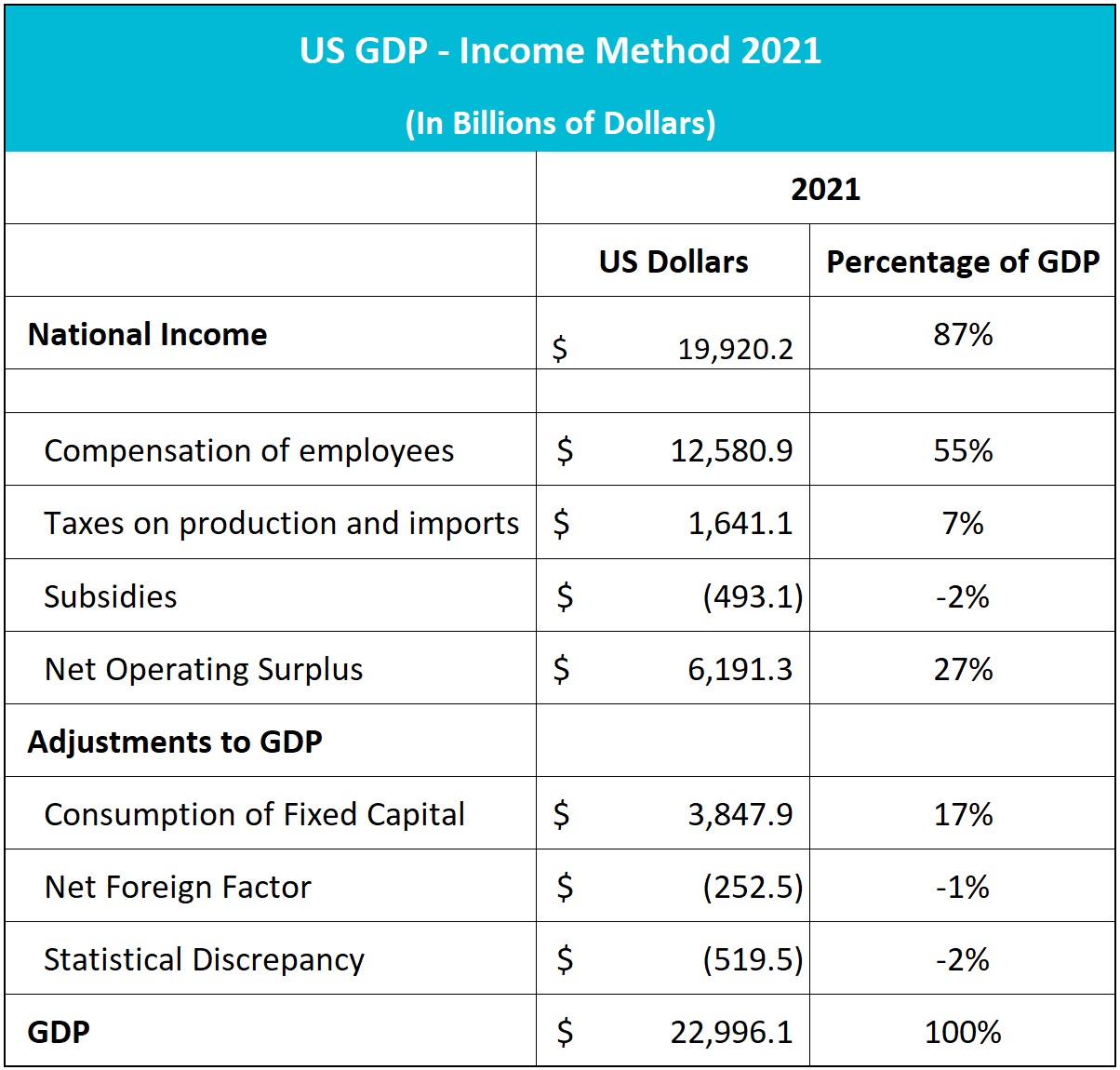