A natural monopoly is a type of monopoly that occurs when one company can provide a good or service more efficiently than can many companies.

Electrical generation, natural gas distribution, rail service, water, and sewer are examples of natural monopolies. Typically natural monopolies occur in industries with shared infrastructures. It would be very inefficient for two or more water companies to lay the pipe for a community, or for more than one railroad to lay tracks between two cities. Communities may grant a company a monopoly or they may take over the responsibility of providing the good or service. In the United States, most electricity is provided by private companies, but most communities have municipal water and sewer services.

A natural monopoly has large economies of scale. One producer can serve an entire market more efficiently than multiple producers because the average cost to produce a unit of the good or services continues to fall at production levels beyond the market it serves. For example, assume a town called Anywhere USA has 500,000 homes and businesses. A local power company, AMPs Up, could produce enough electricity to power 650,000 homes and businesses and its cost to serve 600,000 homes is less per home than it is at 500,000 homes. AMPs Up has a natural monopoly because its average cost to produce electricity is decreasing beyond Anywhere’s quantity demanded. 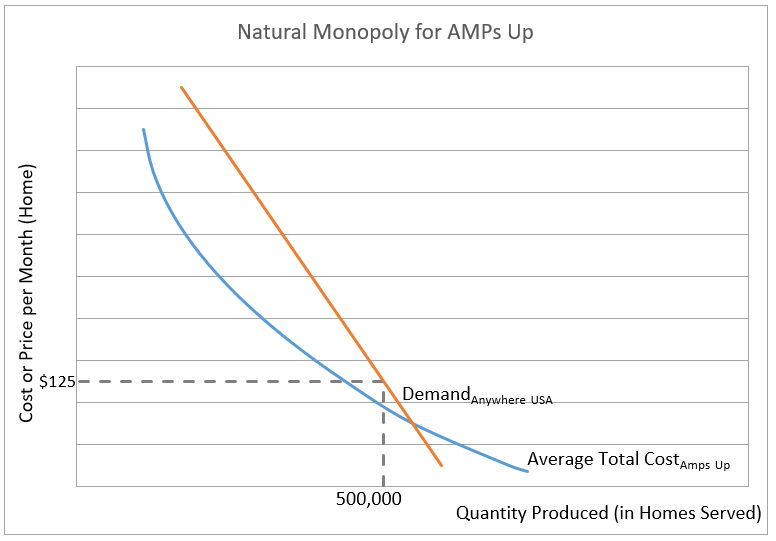 In this case, the economies of scale pose a huge barrier to entry. Companies wishing to enter the market face high start-up costs and can be priced out of the market by a monopoly. The monopoly has a lower average cost than the potential entrant because of its economies of scale. It can afford to engage in a price war and can use its pricing power to discourage potential competition. A competitor would need to capture almost 100 percent of the market to make a profit, which is a risk very few businesses are willing to take.