Definition of Near Money:

Near money is an asset that is not cash - but it is very liquid. Near money is also referred to as quasi-money or cash equivalents.

Liquidity refers to how easily an asset can be converted to cash without selling it at less than its market value. Near money includes assets that are very liquid, but they cannot be used directly to purchase an item. For example, a person purchasing a car may want to use a certificate of deposit as her source of funds. The CD would need to be converted to cash before it could be used. This distinguishes cash from “near money”. Near money is not a medium of exchange, but it has a store of value. Other examples of near money include savings accounts, money market accounts, widely traded foreign currency, and treasury bills. Near money is considered part of M-2, a broader measure of the money supply. 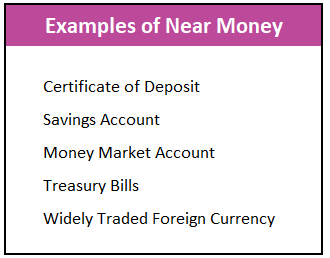 Near money accounts usually earn interest, while cash does not. But the interest rate is low because the risk of loss is minimal since owners of near money can quickly convert their near money to cash. Usually, a fee is charged for the conversion. Examples of fees include the charge to convert one currency into a second currency or a penalty that is paid to cash a CD before its maturity date.

Are shares in a large publicly-traded company near money? The shares are certainly liquid because most shares can be sold within minutes on a major stock exchange. However, most economists would not consider corporate stock near money because a share of stock may not retain its value.