Definition of the New Deal:

The New Deal included 47 programs introduced by President Franklin Roosevelt during the Great Depression to provide relief to farmers and the unemployed. He also hoped to increase the economy’s aggregate demand to revive the economy and provide reforms to lessen the probability of another depression.

The New Deal was promised by Franklin Roosevelt when he ran for president during the Great Depression. He believed the government needed to take an active role in managing the economy to end the Depression. In 1933 at the height of the Great Depression, 25 percent of American workers were unemployed. Between 1929 and 1933 the gross domestic product decreased 26 percent, prices decreased 25 percent, and many banks failed. Bank failures caused bank runs because depositors feared losing their money, which in turn caused a large drop in the money supply and less money was available for business loans. Many small businesses closed because there was a shortage of financial capital when they needed it most. Many workers lost their jobs either because the company they worked for failed or the company cut production in response to a lower demand. President Hoover did little. He, like many of the classical economists, believed the economy would self-correct. He was more concerned about the mounting budget deficit and raised taxes, an action that worsened the Depression. President Hoover raised the highest tax brackets for families (to 63%) and corporations (to 13.75%) in 1933.

Franklin Roosevelt’s landslide victory brought new hope to the nation. Shortly after the inauguration, Roosevelt declared a bank holiday. Banks were audited by the federal government and were only allowed to reopen if they were stable. FDR hoped the public would regain confidence in the banking system and redeposit their money. Confidence would later be improved when the Federal Deposit Insurance Corporation was established to insure bank deposits. Several other programs have survived since the New Deal. 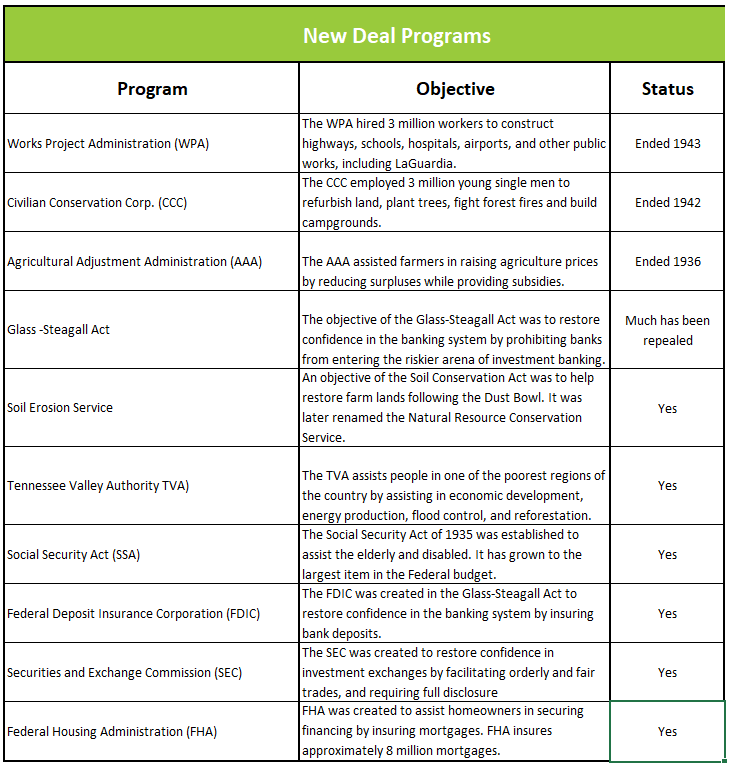 During WWI American farmers increased production to help feed the allies. Many purchased land and equipment on credit. Following the war, exports fell as European production recovered. But farmers still had to pay their debts and continued to produce at higher levels. The resulting surplus led to lower prices. The problem snowballed because farmers felt compelled to further increase production to generate the income they needed, which resulted in prices falling even more. Eventually, prices were so low that some farmers did not harvest their crop because the cost to harvest exceeded the market price. The farmer’s plight was severely aggravated by the Dust Bowl. Adding lands using poor conservation resulted in lands being vulnerable to erosion. Record droughts coupled with high winds eroded over 35 million acres of topsoil. (History Channel)

The Agricultural Adjustment Act was part of the New Deal. Its objective was to raise the price of milk, corn, wheat, cotton, rice, peanuts, and tobacco to pre-WWI levels by reducing the supply. One program assisted farmers by paying them to leave their fields fallow. AAA also helped many farmers impacted by the Dust Bowl. The Supreme Court ruled the AAA unconstitutional in 1936.

Millions of workers were hired by the Works Project Administration, Civilian Conservation Corps, and the Tennessee Valley Authority to build roads, schools, hospitals, dams, parks, and other items the public would benefit from. Roosevelt believed government spending would spark a recovery because workers would use their income to purchase food, clothing, shelter, and other items they could not afford when they were unemployed. The demand for these items would increase. Manufacturers in the private sector would hire more workers to satisfy the increase in demand. The economy’s total or aggregate demand would rise. This idea of demand creating supply was fundamental to a revolutionary economic theory, Keynesian economics, that Roosevelt endorsed.

President Roosevelt’s objective was not solely to end the Depression, he also wanted to establish programs to lessen the possibility of another depression and to restructure American society in such a way to redistribute income so more Americans shared in the country’s prosperity. The plunge of the stock market and bank failures had destroyed most American’s confidence in the financial markets. Renewed confidence was essential in reestablishing the flow of capital desperately needed to propel the economy forward. Prior to 1929 there was little regulation of the stock market leading to fraud and uncontrolled speculation. The New Deal included increased government regulation. The Securities and Exchange Commission brought oversight to the markets by requiring companies to inform investors of their financials. Roosevelt also wanted to increase wages for the working man.

Many programs reduced the income disparity by redistributing income. The National Labor Relations Act made it illegal for corporations to use discriminatory or violent activities to discourage unions from organizing. It protected corporations by making it illegal for unions to obstruct “commerce by preventing the free flow of goods in such commerce through strikes and other forms of industrial unrest or through concerted activities which impair the interest of the public in the free flow of such commerce.” (NLRA) Congress also passed The Fair Labor Standards Act which set a minimum wage, instituted a normal workweek at 40 hours, while establishing overtime pay at 1.5 times wages, and limited the use of child labor. The Social Security Act to help those who were unable to work because they lost a job, were disabled, or elderly.

The national debt increased $236 billion while FDR was president. However, most of the debt was added during the war years. Only $28 billion was added between 1934 and 1941. Like Hoover, Roosevelt raised taxes because he was concerned about the mounting deficit. In 1940, Roosevelt raised the highest tax rate for personal income to 81 percent. The highest corporate tax rate was increased to 24 percent. In 1941 he increased the highest corporate tax rate to 31 percent.

President Roosevelt and the New Deal changed the relationship between Americans and their government by increasing the government’s role in managing the economy and regulating businesses. The surviving New Deal programs continue to reduce income inequality by redistributing income. Social Security is now the largest expense in the Federal budget and redistributes income from the working population to the elderly, disabled, and unemployed. Many economists believe the Depression would have grown worse without the New Deal. Supporters argue regulatory programs put in place have lessened the likelihood of another depression, and many of the programs have lifted the economy by redistributing income so more Americans can share in America's prosperity. Critics contend FDR’s policies ultimately harmed the economy by increasing the role of government with more government regulation. Investment has been constrained because higher tax brackets funnel money away from investment and business expansion.