A yield curve can be drawn for any debt instrument with varying maturities, but of similar default risk. Mortgages, CDs, corporate bonds, and municipal bonds are several securities that have yield curves. However, when investors speak of the yield curve, they are referring to the market for US government Treasuries. The US Department of Treasury publishes daily yield curve rates.

When graphing a yield curve, the vertical axis is the yield to maturity and the horizontal axis is the time until maturity. A normal yield has a positive slope because yields increase as maturity increases. 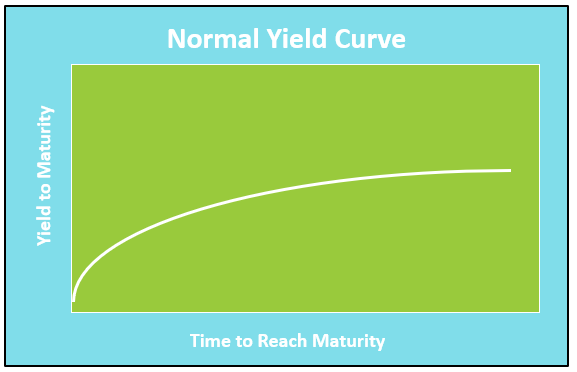 It is important to consider an investor’s perspective when understanding the yield curve. Suppose you have $10,000 to invest, and you choose to buy US government-guaranteed securities. You have several options. You can buy short-term treasury bills (a maturity of one year or less), medium-term Treasury notes (a maturity between two and ten years), or long-term treasury bonds (maturity of 30 years). Keep in mind that if interest rates increase, the value of the investment will decrease. This is truer with longer-term bonds than Treasury bills or notes. (Watch our video Bonds and Interest Rates for an explanation of why bond prices increase when interest rates decrease.) Consider the following scenario and investment options.

The economy is growing. You believe the Federal Open Market Committee (FOMC) (first reference)  will continue to either lower rates or maintain stable rates to encourage continued growth. You have thousands of investment options, but for simplicity, assume there are only the three options listed below. The yields to maturity are expressed as an annual percentage. Which option will you choose? Is the 4.75 percent difference (commonly referred to as the spread) between the 3-month yield and the 30-year yield worth the risk that interest rates will increase and the value of the 30-year Treasury bond will decrease? You believe it is, because if rates remain stable or decrease, you could realize a higher return for your investment. Economists and investors refer to the yield curve as being “normal” when longer-term bonds have a higher return than shorter-term securities. 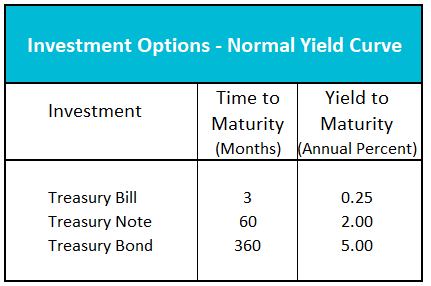 In our example, the 30-year bond has a higher yield to maturity than the 5-year note and 3-month treasury, so the yield curve is “normal”. Why do investors normally require a higher return when they tie up their money for a longer period because of the added risk associated with time. After all, US treasuries have little or no risk of default because they are backed by the full faith of the US government. Economists have three explanations: