Open market operations is a tool used by central banks to carry out a monetary policy through the purchase and sale of government securities.

Open market operations is the preferred method to manage the money supply and manipulate interest rates because it can be implemented quickly. In the United States, the Federal Reserve’s Federal Open Market Committee (FOMC) establishes the nation’s monetary policy. This includes setting a target for the federal funds rate, the rate that is paid on overnight loans between banks. The federal funds rate impacts the economy because it affects most interest rates, including rates paid on credit cards, mortgages, car loans, and business loans.

Using open market operations helps the Fed achieve its objectives of maximizing employment while maintaining stable prices. Managing the money supply helps maintain stable prices. When there is too much money, too many dollars are available for too few goods, which pushes up the price of those goods. Too little money in circulation can choke an economy. (Read our lesson Inflation, to learn more about the relationship between the money supply and prices.) Stable or increasing employment is achieved by a growing economy, which is largely influenced by interest rates. Higher rates stifle an economy, while low rates can be a catalyst for economic growth.

Open market operations helps the Federal Reserve manage the money supply and manipulate the federal funds rate by purchasing and selling government securities. When you buy something, you have less money available to buy other goods and services. Likewise, when a bank purchases a government bond it has less money to lend. When you sell something you own, you have more money to purchase other items. Similarly, when a bank sells a government bond to the Federal Reserve, the bank has more money to lend. 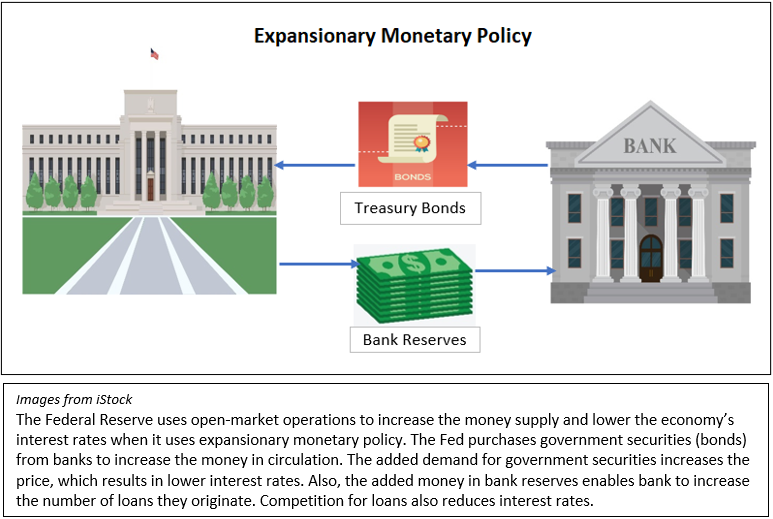 The Fed purchases government securities (usually Treasury bonds) in the open market. To simplify our understanding, assume the securities are purchased from a bank. In this case, the Fed would add the money it pays for the securities directly to the bank’s reserves at the Fed. The added reserves increase the money available for banks to lend. Bankers, wanting to earn a profit will try to use the reserves to originate more loans. Competition among banks increases, which results in bankers decreasing their rates to attract more borrowers.

Banks will also want to earn interest on their unused reserves by depositing their reserves in another bank where they will be paid the federal funds rate. As banking reserves increase, so does the demand for federal funds, and the price paid (federal funds rate) decreases. Open market operations also influence the supply and demand for treasuries. Expansionary monetary policy increases the demand for government securities, which pushes up the price of bonds. Bond prices and interest rates are inversely related, meaning that when a bond’s price increases, interest rates drop. (Watch our video The Relationship Between Interest Rates and the Price of Bonds for an explanation of the relationship between the price of an interest-paying asset and interest rates.)

Lower rates stimulate the economy which promotes job growth. Inflation can become a problem when an economy is overheated, i.e. it is growing too fast, because the demand for all goods and services may increase at a faster clip than businesses can deliver them. During these periods the Fed may choose to slow economic growth using contractionary monetary policy. Open market operations are again used, except, unlike with expansionary policy, the Federal Reserve sells government securities, which increases rates and lowers the reserves banks have available to lend. The increase in the supply of available government securities reduces their price, which means rates increase. Also, banks have fewer reserves, so their loan capacity is diminished. The reduction in the supply of loanable funds increases interest rates. Economic growth is slowed, which slows the rate of inflation. The diagram below illustrates open market operations when contractionary monetary policy is employed.