Short-term profits are maximized at the optimal production level. It is the output where the marginal revenue derived from the last unit sold equals the marginal cost to produce it.

Companies frequently evaluate the relationship between their revenues and costs. Does it make sense to lower the price of a good to increase sales, even if it means the cost to produce the additional unit increases? Possibly, but the short-run answer depends on the relationship between the revenue gained from the sale and the cost to produce the next item.

Imagine you own Accounting Pens, a small manufacturer of pens. Your objective, like most business owners, is to maximize your profits. You operate in a very competitive market and must accept the market price of $5.00 per pen. How many pens should you produce? If it costs $4.45 to produce one more pen, would it make sense to manufacture that pen? Absolutely! You would add $0.55 to your profit if you sold that unit. How about if your cost to produce the next pen was $5.25? Would it make sense to manufacture that pen? Probably not. In that case, you would lose $0.25 if you sold the pen.

In the table below, marginal analysis is used to determine the output yielding the highest profit for Accounting Pens. 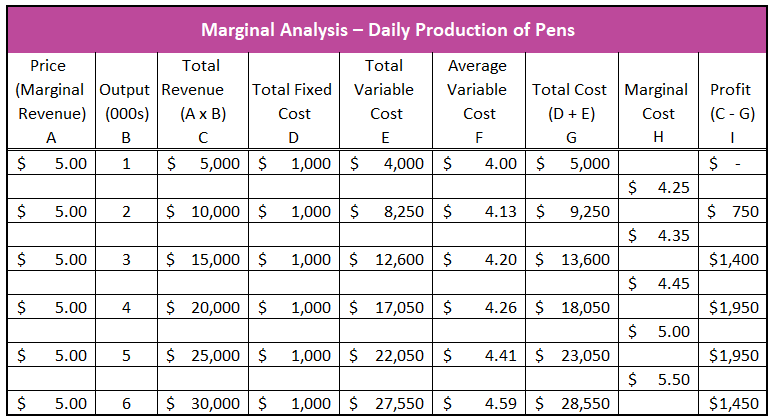 Suppose pens must be produced in minimum lots of 1,000. Also, suppose Accounting Pens operates in a perfectly competitive market and it is a price taker. Accounting Pens can sell as many pens as it produces for $5.00 per pen. Reducing its price will not generate additional sales. If each additional pen can be sold for $5.00, then Accounting Pens’s marginal revenue equals $5.00 (Column A). Total revenue (Column C) equals the price (Column A) multiplied by the number of pens sold (Column B).

Fixed and variable costs must be known to identify the most profitable daily output. Accounting Pens’s total fixed cost (Column D) is $1,000 per day. Fixed costs are constant and not influenced by output. Accounting Pens’s total variable cost is given for each output level in Column E. Note that the average variable cost (Column F) is increasing. This is because the law of diminishing marginal returns states that eventually, as variable inputs (such as labor) are added to a fixed resource, the production may increase, but at a slower rate. For example, as employees are added to Accounting Pens’s production line, production increases, but the average increase is less. (Taken at an extreme, production could decrease if employees get in each other’s way and slow down the production process.) For a more detailed explanation of the law of diminishing returns, visit the glossary.

Suppose Accounting Pens is in a monopolistic competitive industry and it wants to increase sales. To do so, assume management chooses to lower the price of its $5.00 pens, resulting in a marginal revenue of $4.85. The lower price increases the quantity demanded to 6,000 pens per day. Output is increased to meet the increase in demand, but this increases the marginal cost to $6.00 per pen. Profits fall in the short run, but companies may reduce prices knowing they will not maximize their short-term profit. Instead, they lower their price as a long-run strategy to gain market share.