Perfect competition is a market structure where many sellers and buyers trade in identical products. Neither seller nor buyer is powerful enough to influence the market price.

Companies in a perfectly competitive industry sell standardized, or identical, products. For example, a buyer of wheat cannot tell if Farmer Jones or Farmer Sue produced the bushels they buy. Standardization prevents companies from increasing their price by differentiating themselves from their competition.

Companies in other market structures differentiate their products to build brand loyalty which enables them to raise their prices. Products and services may be differentiated by offering better service, slightly distinctive characteristics, or even different packaging. This market strategy is unavailable to companies in perfectly competitive industries because they sell standardized products.

Companies operating in perfect competition can harm themselves by either increasing or decreasing their price. A company that lowers its price reduces its income because no matter how much it produces, it does not produce enough to influence the market and it can sell everything that it produces at the market price. However, if it raises its price, potential customers will choose to purchase from another producer that sells the same good or service. Economists refer to perfectly competitive companies as “price takers” because companies would not increase sales if they lowered their price and they would not have any sales if they raised it. A seller’s price fluctuates, but the changes are determined by the industry’s supply and demand rather than a single buyer or seller exerting market power.

For example, assume Farmer Jones’s farm is 5,000 acres. In the year 2000, approximately 520 million acres were used to grow wheat, so while a 5,000-acre farm is large, it is not large enough for Farmer Jones to have an impact on the market price of wheat, since he produces only 0.01 percent of the market. Wheat has many buyers because of its widespread uses. Large food companies like General Mills and Kellogg’s buy enormous amounts of wheat, but even these large firms do not have sufficient clout to impact its price. The price of wheat is instead determined on the Chicago Board of Trade, in the same way the price of a stock is determined on the New York Stock Exchange. Perfectly competitive markets must have enough buyers and sellers that no buyer or seller is able to alone influence the price of the good or service. The price is determined in the marketplace by supply and demand.

Assume the price of wheat is $8.00 a bushel. If Farmer Jones tried to increase his price to $8.25, he would not be able to sell any of his wheat. His sales would drop to zero! Frequently a business will lower its price to sell more of its goods or services, but this strategy does not make sense for Farmer Jones. There is no incentive for him to sell at $7.75 because he can sell his entire harvest for $8.00 a bushel. Farmer Jones is a price taker. He accepts the price the market dictates. The only way Farmer Jones can increase his revenue is by increasing production. Farmer Jones’s situation is illustrated by Graphs 1 and 2. Graph 1 shows the market equilibrium and market price using the industry supply and demand curves. The market price, PE, is $8.00 per bushel. The entire industry produces 21 billion bushels (QE on Graph 1).

Graph 2 provides Farmer Jones’s supply and demand curves. He produces 200,000 bushels, which is a tiny fraction of the total market. Farmer Jones has virtually no effect on the market supply. He has no bargaining power, so he must accept the market price. His demand curve is horizontal (perfectly elastic) because if he raised his price he would be unable to sell a single bushel, but he does not have an incentive to lower his price since he can sell all he produces without influencing the market price.

Perfectly competitive industries normally have low barriers to entry. A barrier to entry is an obstacle that prevents potential competitors from providing the same good or service. The most common barrier to entry is high start-up costs. Other barriers include regulatory restrictions, technological advantages, and access to natural resources.

Next year Farmer Jones would probably choose to substitute rye for wheat if his expected profit for rye is higher than wheat. Fortunately, he can easily choose to switch to rye because of a low barrier to entry. (Note that the capital – productive land and equipment - required to start a farm may be a high barrier to entry, but Farmer Jones has a low barrier to switch to rye because he already owns the land and equipment.)

Information must be readily available in a perfectly competitive market. Farmer Jones may be able to sell his wheat at $8.25 if an ignorant buyer fails to recognize he can purchase as much wheat as he needs at $8.00. Likewise, Farmer Jones must be aware that he can sell his entire harvest for $8.00 and does not need to cut his price to $7.75 if he wants to maximize his profit. The Internet has increased competition in many industries by informing buyers and sellers about pricing. Farmer Jones can easily research the market price for a bushel of wheat. Companies like Travelocity have prospered by providing price comparisons for hotels, airlines, and rental cars online, thereby increasing the competition in the travel industry.

The table below summarizes the common characteristics of a perfectly competitive industry. 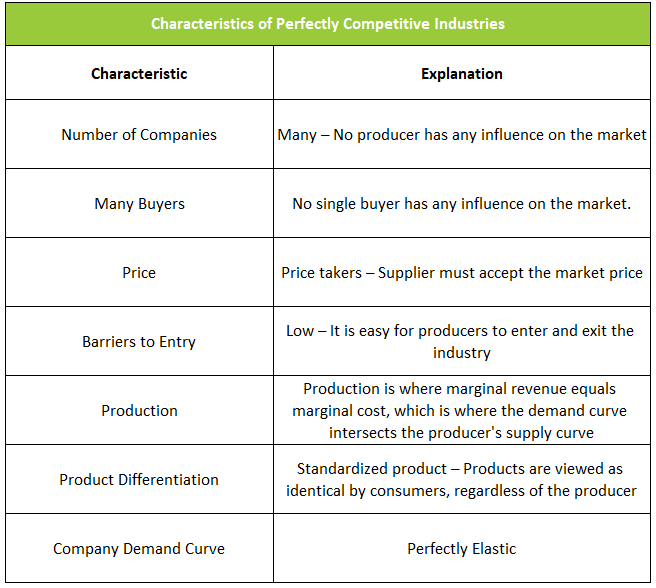