Definition of the Production Possibilities Frontier:

Economists use the production possibilities frontier to illustrate several basic economic concepts, including scarcity, opportunity cost, efficiency, and the relationship between efficiency and economic growth. The curve depicts the maximum production capacity of a company or country. Assume a country, Clean Speech, is only able to produce vats of soap and cell phones. Clean Speech could produce 10,000 vats of soap per day if it dedicated all of its resources to producing soap. This is represented as point A on the graph below. If the leaders choose to produce 3,500 cell phones Clean Speech needs to allocate all of its resources to manufacture cell phones, at the expense of soap. This is point E on the graph below. The curve tells us that it is possible to produce 9,500 vats of soap and 1,500 cell phones. This is point B on our graph. If the leadership chooses to increase the production of cell phones to 2,700, resources would need to be taken away from manufacturing soap. Soap production would drop to a maximum of 7,000 vats per day. (Point C) The opportunity cost of increasing the number of cell phones from 1,500 to 2,700 is 2,500 vats of soap (9,500 - 7,000). Any point inside the frontier is less than capacity. A company or country can utilize its resources more efficiently to increase production. For example, at Point G, Clean Speech could increase the production of both cell phones and soap without reducing the other. This can occur anywhere within the area BGD. 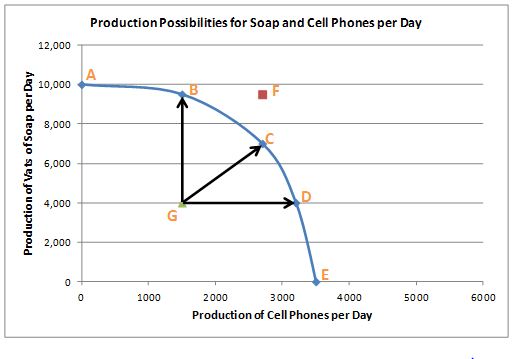 Understanding the implications of the production possibilities curve helps us prioritize. When people or resources are allocated to achieve an objective, another objective must suffer if we are operating on the production possibilities frontier. Imagine an economy where the brightest minds pursue banking careers. Naturally, the banking industry would thrive, but perhaps the manufacturing industry would suffer because there would be fewer manufacturing innovations. Or, assume government chooses to hire the brightest scientists to develop very sophisticated weapons. These brilliant people may be deterred from developing a life-saving drug. Decisions made by individuals, companies, and countries influence the potential of an individual, company, and country.