Definition of the Public Sector:

The public sector is the part of the economy that includes local, state, and national governments.

The public sector is the part of the economy that includes local, state, and national governments. The Office for National Statistics recently published that the United Kingdom governments employed 20.4 percent of the UK's workforce in December 2011. In the United States, 17 percent of non-farm employees worked for either the federal, state or municipal governments in February 2012.

The role of government determines the size of the public and private sectors in an economy. In market economies, the private sector dominates by providing most of the employment, and most of the goods and services. Taxes paid by businesses and individuals in the private sector fund the public sector. The governments of nations with market-oriented economies recognize the need for an efficient market economy. Their objective is to maintain an environment that provides economic incentives while addressing market failures. The debate is in defining the market failures and deriving the best way to mitigate them.

Public goods are goods or services that the private sector would not provide at a profit because the use is shared. Most transactions are between two entities where the buyer reaps the benefit. However, this is impossible in some cases. If a state park is well maintained, all visitors benefit. If the local river is cleaned, the entire community benefits. Other public goods include: national defense, police and fire protection, roads, public schools, and infrastructure. In these cases, it is hard to imagine how individuals would choose to pay for the service independently. For example, individually, we are unable to defend our homes from an international attack. We depend on national defense. Every resident benefits. National defense is a public good that the government can provide more efficiently than the private sector. Imagine if your house is on fire and you have to negotiate to have the blaze put out. You would not be in a good negotiating position!

Markets are imperfect when there is a "spillover" cost. Companies left alone have an incentive to pollute rather than spending enormous sums of money to reduce pollution. The resulting health care costs are borne by individuals who may not have purchased the good or service produced. The public sector is responsible for mitigating this with either a market-oriented solution, such as cap and trade, or regulations.

Monopolies have pricing power. Left unabated, the monopoly will produce less and charge more than what is socially optimal. Government (the public sector) normally regulates to promote competition.

An essential role of the public sector is to provide a legal system that protects property rights and contracts. It is hard to imagine entrepreneurs starting businesses without the security of knowing their interests are protected.

The public sector uses fiscal and monetary policies to try to manage the economy's growth, inflation, and employment.

Governments, like businesses, employ individuals from households. Some of these people include teachers, public safety personnel, military personnel, government officials, and others. The public sector competes with businesses for labor in the factor market. Governments, like consumers, purchase their needs in the goods and services market. The relationship between government (public sector), businesses, and households (the private sector) can be seen in the circular flow diagram below. 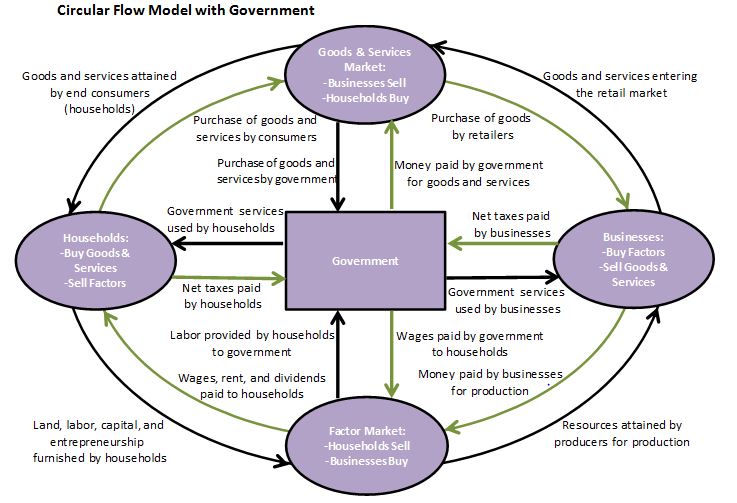