Quantitative easing is a strategy used by central banks to increase the money available in the economy by purchasing marketable securities. It is intended to add liquidity and stimulate the economy.

Quantitative easing (QE) has long been a tool used by central banks, but it has gained much attention following the Great Recession because of the magnitude of increase in the monetary base. With QE, Federal Open Market Operations purchase government securities, and the money paid for the securities is deposited in the banks, thereby increasing the banks’ reserves. Central banks use open market operations to influence the federal funds rate. But what happens when the federal funds rate falls to zero? Traditional monetary tools will no longer be effective. The answer is to purchase assets…any financial asset…and create bank reserves (money) by depositing the amount paid for those assets in the seller's bank. This is precisely what the Federal Reserve and other central banks did following the Financial Crisis of 2008. Between December 2007 and early 2015, the Federal Reserve’s assets increased from $.89 trillion to over $4.5 trillion. 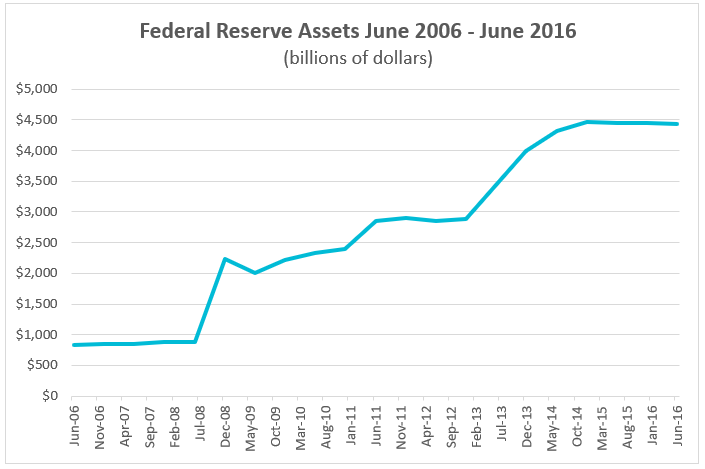 Adding liquidity to the banking system provides banks with the ability to accommodate an increase in withdrawals from concerned depositors without selling assets at a huge discount. It also provides lending institutions with the confidence to lend rather than hoard their cash. Unfortunately, during the 2008 financial crisis, most of the increase in reserves was retained by banks as excess reserves because of more stringent underwriting.

What happens if lenders remain reluctant to lend? Normally, the central bank’s intention of adding reserves is to increase aggregate demand by providing the banking system with an incentive for banks to lend to consumers and businesses. However, during the Great Recession, lending activity was less than the Federal Reserve wanted because many banks used their excess reserves to write down some of their nonperforming loans. Furthermore, many lenders tightened their underwriting requirements and, in doing so they approved fewer loans.

Loans are bought and sold, so when there is uncertainty about the quality of a loan, investors will either choose not to buy the loan, or demand a very low price. Credit easing is a type of quantitative easing that identifies specific interest-sensitive assets to purchase. Purchasing the assets adds liquidity and reduces interest rates. During the Great Recession, there were doubts about the credit quality of many assets. Some sub-prime loans had been sold as investment-grade investments when their real value was unknown. Discomfort with the credit ratings resulted in investors either discontinuing their investment in mortgage-backed securities or paying a large discount because of the added risk. This widened the interest rate spread between Treasuries and other debt to historically elevated levels.

Another targeted asset was commercial paper. There was a growing concern that issuers of commercial paper would not be able to roll over the paper when it matured (i.e. pay it back by issuing more paper). The added investment risk added to the reissue rate. When the Federal Reserve purchased commercial paper, it added liquidity, while lowering the rate on commercial paper (since the demand increased).  The European central bank used the same strategy to purchase corporate bonds.

Quantitative easing has some risk, especially at the magnitude it was used between 2008 and 2014. One risk is losing money on the investments. Another is the inflation generated by increasing the money supply.