Definition of a Quota:

A quota is a government imposed limit on the quantity of a good that can be imported or exported for a certain period.

Quotas impose limits on the quantity of a good that can be imported or exported. Import quotas are used to shift production to domestic companies from international companies that have a comparative advantage. US shoe manufacturers may convince Congress to limit the number of shoe imports. The limit would be the quota for shoes imported into the United States. The result, like tariffs, is domestic manufacturing increases, but consumers pay a higher price and purchase fewer shoes. Supply and demand analysis can be used to illustrate: Begin by assuming that the market is closed, and all shoes sold in the United States must be produced domestically. 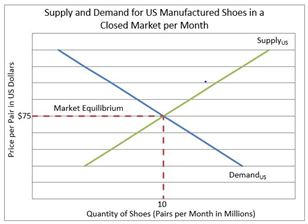 The equilibrium price is $75 per pair. Ten million pairs of shoes are produced per month by US manufacturers. Next, assume free trade is allowed. The world supply and demand curves are below. 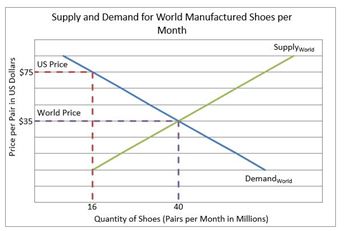 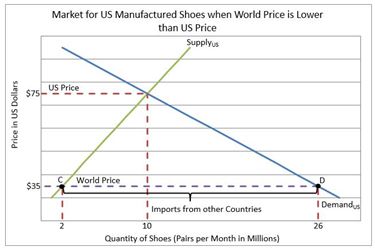 Congress imposes a quota to protect American jobs. It chooses to limit imports to 18 million shoes. The reduction in quantity supplied results in a bidding war, and the price of shoes is bid higher. At higher prices, US manufacturers are willing to manufacture more shoes. Eventually, the market price settles where the distance between the US supply curve and the demand curve equals 18 million (the quota). 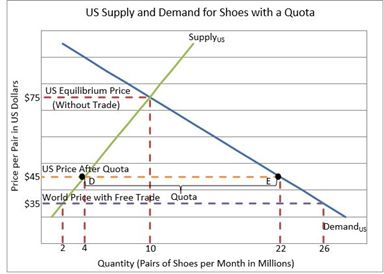