Definition of the Ratchet Effect:

The ratchet effect occurs when prices are slow to decrease after inflationary pressures are removed.

Most economists consider fiscal policy less effective when the economy is overheated and demand-pull inflation is a concern. Businesses have plenty of work, causing them to raise prices because the demand for their services has increased. To slow the growth of the economy and inflation, policymakers may implement contractionary measures. A reduction in the aggregate demand would slow the rate of increase in the price level. However, management teams may fear that reducing wages would hurt worker morale and productivity. The ratchet effect limits the efficiency of contractionary policies because businesses are hesitant to lower wages and prices. A ratchet is a tool that only allows an object to move in one direction. For example, a car jack allows the user to ratchet the car up without it falling. When aggregate demand increases, businesses respond quickly by raising prices. However, businesses are slow to return to their lower prices when the inflationary pressure is removed. Only after a prolonged period would management reduce their prices. The ratchet effect limits or delays the effectiveness of using fiscal policy to combat inflation because businesses are slow to drop their prices.

In fact, curbing inflation with fiscal policy could contribute to a greater than optimal drop in production. The graph below illustrates this possibility. Ideally, the economy would operate at the long-run equilibrium where the LRAS, SRAS, and AD curves intersect. Here output would equal RGDP1 and the price level would equal P1. Assume the economy is overheated and operating beyond its long-run aggregate supply (LRAS). Short-run equilibrium is where the short-run aggregate supply curve (SRAS) and aggregate demand (AD) curves intersect. On the graph below the resulting equilibrium output and price level are RGDP0 and P0, respectively. Any small increase in the aggregate demand results in a high rate of inflation. The government cuts spending and reduces the aggregate demand from AD0 to AD1 hoping inflation and output return to the long-run equilibrium. Without the ratchet effect, prices would be flexible and fall to P1. The output would equal RGDP1. But the ratchet effect prevents prices from falling, so the resulting production is RGDPR, which is less than the desired output of RGDP1. 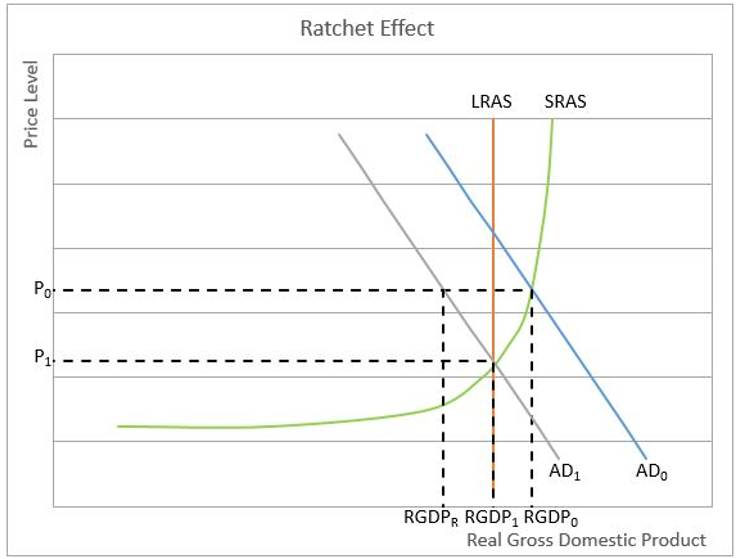 While the ratchet effect may deter prices from falling, it does not prevent a slowing of the rate of inflation. For example, assume the price level is at P0 and the rate of inflation equals 10 percent. Contractionary fiscal or monetary policies are implemented. The ratchet effect may deter the price level from falling below P0, but it may slow the inflation rate to below 10 percent.