A real figure is a percentage or monetary figure after being adjusted for inflation.

The dollar amount you are paid and prices on a price tag are stated in nominal dollars. “Real” figures are adjusted for price changes. Real values help economists decipher between changes resulting from changes in prices versus other factors such as shifting supply or demand curves. Figures quoted in nominal terms may be misleading. For example, assume an employee earning $30,000 receives a five percent pay raise in year 1, but the inflation rate is eight percent. The employee may feel thrilled to get a raise to $31,500, but in reality, she is worse off because her real change in wages is negative three percent, which is equal to $29,100 when expressed in year 1 dollars.

If production stays the same but prices increase, the GDP would still increase. This can be very misleading. For example, the table below compares nominal and real gross domestic product and shows the annual nominal GDP, the real GDP adjusted to 2009 dollars, and the average inflation rate between 1973 and 1975. Note that the GDP increased during this period. Some may conclude the economy grew, when it actually contracted. After adjusting for inflation it becomes evident the real gross domestic product (RGDP) decreased. The US economy was in a period of stagflation, where inflation was approximately 10 percent, and production actually decreased. Stagflation occurs when there is inflation and stagnant economic growth. Adjusting the figures to account for inflation gives a much clearer picture of an economy’s health. 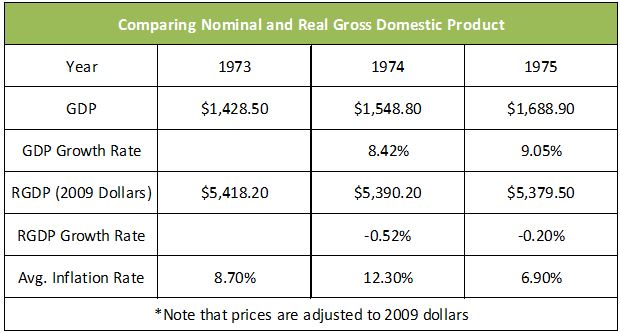 It is possible for the nominal GDP to decrease when production increases following a decrease in the general price level and an increase in production. (See Nominal Gross Domestic Product for a numerical example.)

I recall a very misleading bank advertisement when inflation exceeded ten percent and banks were selling IRAs paying nine percent. The ad implied that a person investing at nine percent would have enough money to purchase a yacht when they retired because their income would grow to over one million dollars. What the ad failed to point out is that if inflation continued at ten percent, the yacht would probably cost several million dollars. Using real returns would have provided a more accurate picture.

In summary, real numbers are more accurate when comparing economic activity or investments over an extended period because real figures adjust for price changes, while nominal figures do not.