A recessionary gap is the gap between actual production and the full employment output when the actual output is less than the natural level of output.

During a recession, an economy is not achieving its full potential. The recessionary gap measures the difference between where the economy is and where it should be. The economy should be in long-run equilibrium where all of its resources are used to their full and most efficient capacity. Note that this is not at zero unemployment and factories are not running for twenty-four hours, seven days a week. The natural unemployment rate includes individuals who are unemployed because they are in transition. Factories need to have some downtime for maintenance and upgrading.

This gap is labeled on the graph below. The economy may or may not be in an actual recession, but growth is modest and the economy can grow without dramatically increasing inflationary pressure. Initially, the economy is functioning where the AD1 and SRAS curves intersect. Output is at RGDP1, which is less than the optimal output of RGDP2. The difference is the recessionary gap. 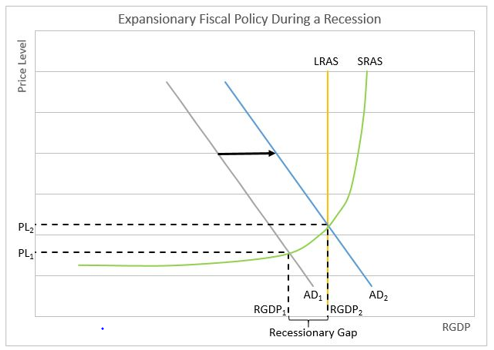 Economists generally agree that in time the economy will correct itself and reach long-run equilibrium, but how long will it take? John Maynard Keynes promoted an activist, expansionary fiscal policy that focuses on manipulating aggregate demand. He developed Keynesian economics during the Great Depression to explain the Depression and identify a strategy to eliminate it. During recessionary periods, Keynesians advocate increasing aggregate demand with government spending to pull an economy out of the doldrums sooner. Keynesian policies were endorsed by President Franklin Roosevelt in establishing the New Deal, which most economists believe helped pull the US out of the Great Depression. Of course, the government spending to finance the weaponry and troops in World War II also helped increase the aggregate demand. Keynes’ views still influence policymakers today.

Aggregate demand includes personal consumption, investment, government demand, and net exports, so a change in any of these will affect the price level and real gross domestic product. The aggregate demand for an economy increases when any one of these variables increases. US government spending following the Great Depression and Japan’s spending during its Lost Decade are examples of increases in government spending. Tax reductions can also cause an increase in the aggregate demand, assuming there is no comparable reduction in government spending that was intended to increase the economy’s aggregate demand. Reducing personal income taxes has the same effect as increasing personal disposable income because consumers use the additional income to purchase more goods and services. When individuals purchase more goods and services from businesses, business profits increase. As a result, businesses increase production by investing more money in capital equipment or hiring additional workers. Reducing corporate (business) taxes has a parallel effect. The lower costs boost profits, which promote business expansion. During depressions and recessions, an economy operates on the flattest portion of the SRAS. An increase in the AD results in minimal inflation relative to the increase in production. On the above graph, this occurrence is shown as a shift from AD1 to AD2. RGDP increases from RGDP1 to RGDP2 as a result. Note that the increase is exactly sufficient to return the economy to its LRAS.