Definition of a Regressive Tax:

A regressive tax is a tax where the average tax rate increases as taxable income decreases, which means a higher-income family pays a smaller portion of their income in the tax than a lower-income family.

A regressive tax system affects the low-income taxpayer more than a high-income taxpayer because a larger portion of his income is being used to pay the tax. For example, if two buyers purchased the same item, and both had to pay a $10 tax to purchase the item, the tax is regressive because $10 is a higher percentage of a poor person’s income than a wealthy person's.

Many people believe most tax burdens should be shared equally, such as when everyone pays the same user fees to renew their license, park their car, or use a national park. These user fees are examples of a regressive tax because it burdens low-income families more than wealthy families. Few believe poor people should pay the same income tax as wealthy people. In most countries, the income tax is based on an ability to pay. Higher-income taxpayers pay a larger portion of their income in taxes than lower-income taxpayers. The income tax is an example of a progressive tax.

The sales tax is a regressive tax. Assume the sales tax is five percent, and a basket of goods costs $100. Everyone purchasing the basket would pay a sales tax of $5. Many states exempt food and clothing from a sales tax to reduce the tax burden on low-income families. Generally, if the tax is based on the value of an asset, it is regressive. The exceptions are taxes imposed only on the very wealthy such as estate taxes, which are based on the value of a deceased person's estate at the time of death. In 2017 an estate tax is not owed on estates valued at less than $5.49 million in the United States.

Property taxes are another example of a regressive tax because the tax is not based on the owner’s income. It is true that wealthier people generally own larger homes than lower-income taxpayers, but the tax is based on the property value – not the owner’s income. For example, a highly compensated woman may experience a dramatic drop in her income after she retires, but would still owe the same property tax if she does not move.

Students need to understand the difference between regressive, proportional, and progressive tax systems. A proportional tax on income fixes the tax rate as a percentage of income. The proportional tax is frequently referred to as a "flat tax" because the tax rate is a fixed percentage. The taxpayer’s average tax rate equals the marginal tax rate. For example, assume the tax rate is 15 percent. A family earning $17,000 would pay $2,550, and a family earning $150,000 would pay $22,500. Payments increase as taxable income increases, but they do not increase as much as with a progressive tax where the marginal tax rate (or tax bracket) increases as a family's taxable income increases. A payroll tax (Social Security and Medicare) is a flat tax because everyone pays 7.65 percent of their income - that is until they earn more than $127,200, after which the marginal rate falls to zero. Since no taxes are paid on income exceeding $127,200, payroll taxes are technically regressive.

Most developed countries have a progressive income tax. Policymakers contend that higher-income individuals should shoulder more of the responsibility of paying for the goods and services government provides. They are better able to afford it, and perhaps they have more to gain. Higher-income people are more likely to travel, and so they benefit more from roads. Wealthier citizens have more to lose from the destruction of a war, so they should shoulder more of the military expense.

The easiest way to distinguish between a progressive, regressive, and proportional (flat) tax is with an example. We use three individuals in our example. Sandra is a teacher. Her annual salary is $30,000. Todd works in the athletic department of a university and earns $35,000 per year, and Bill is a mortgage broker who earns $150,000 per year. 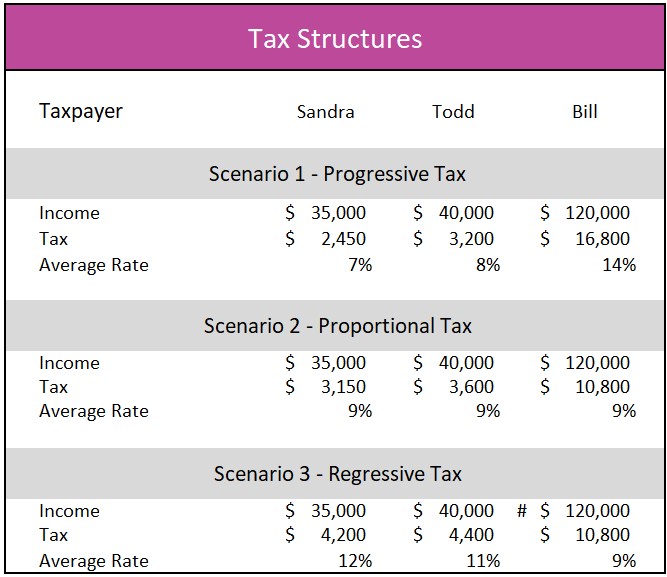